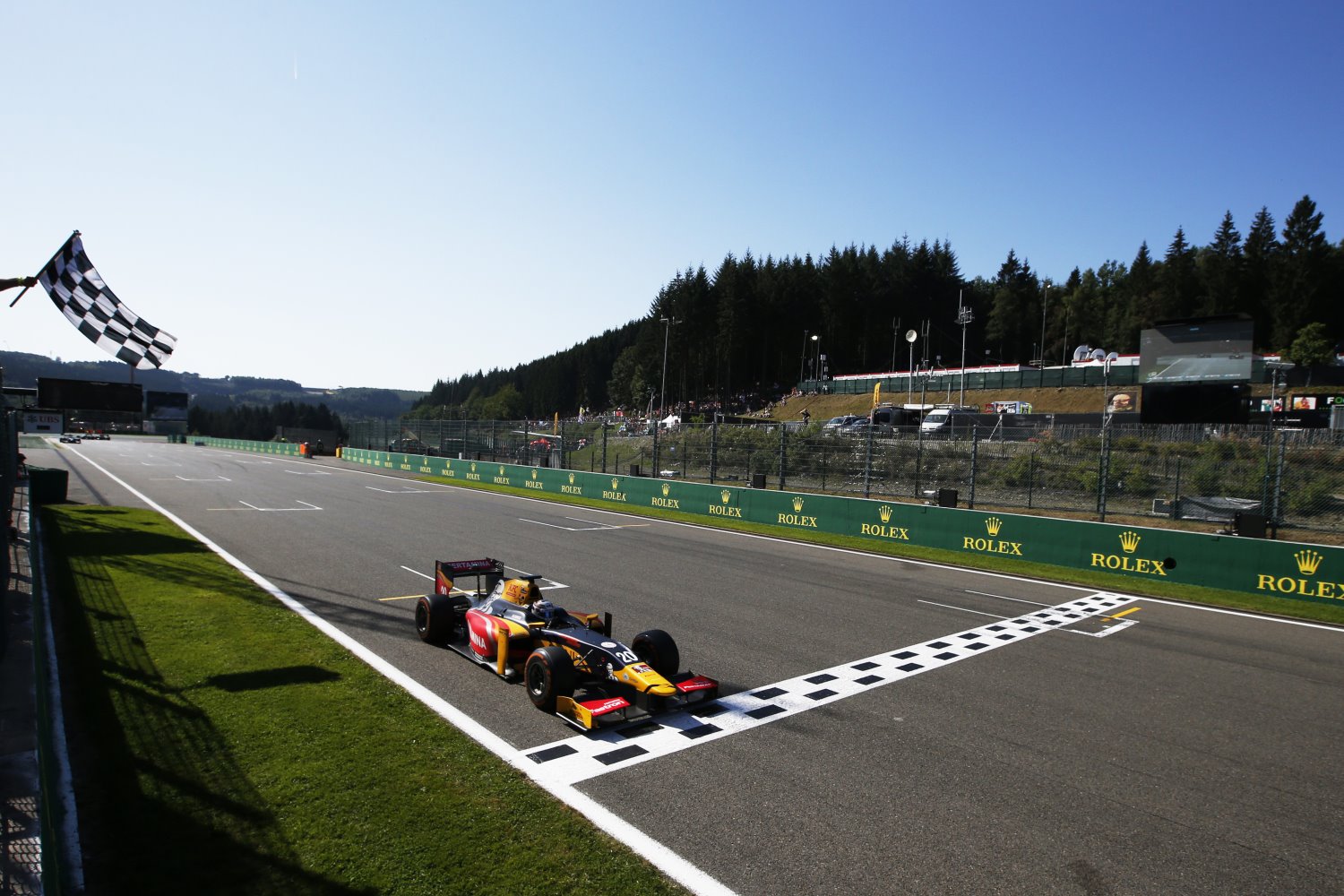 Antonio Giovinazzi has grabbed the second win of the Spa-Francorchamps weekend for PREMA Racing with a dominant display of speed and consistency in this morning’s Sprint Race, making a great start before overtaking for the lead and stretching out a gap to the flag ahead of Gustav Malja and Luca Ghiotto.

Malja made a good start from pole when the lights went out, but Giovinazzi made a better one from P3 to slide inside front row starter Ghiotto at La Source for P2 behind the Swede. The Trident man soon had his mirrors filled by Raffaele Marciello and teammate Artem Markelov, who dispatched Alex Lynn in fine style at Campus, while further back Pierre Gasly and Oliver Rowland had a coming together, with the Frenchman coming off worse as his lost part of his front wing.

The Red Bull tester was soon back on a charge, dispatching Rowland on the run down to Eau Rouge and Lynn at the Bus Stop two laps later. Teammate Giovinazzi wasn’t hanging around either: after watching the leader for a few laps he attacked on lap 7, going outside Malja on the Kemmel straight before sweeping through into Les Combes for a lead he was not going to relinquish to the flag.

Markelov looked quicker than his teammate all race long but was just unable to get by Marciello, and with Gasly on a charge the Russian’s situation was looking grim: by lap 14 the Frenchman had caught the RUSSIAN TIME pair, feinted left then swung right on Markelov and was through at Rivage, throwing the Russian into the clutches of King and Lynn: the Williams man got a tow from both to take King at Les Combes and Markelov at La Source, who ran wide at Les Combes next time through to lose out to King too.

Back out in front Giovinazzi was streaking away to see the checkered flag 2.3 seconds ahead of Malja, who drove a fine race for his first GP2 podium in second. Ghiotto held on for his third podium of the year ahead of Gasly, who dispatched Marciello with a fine move at the Bus Stop but ran out of time to move further forward, with Lynn leading countryman King home in P6. Markelov was out of tires but looked to have done enough for the final point, but the race-long fight between Rowland and Sergey Sirotkin spilled over at the Bus Stop, with Sirotkin running inside his rival but tapping the back of his countryman, with Markelov spun into retirement and Rowland grabbing 8th.

A strong weekend for Gasly saw him stretch his lead in the Drivers’ standings as teammate Giovinazzi moved up to second: the Frenchman leads by 146 points to 129, with Marciello on 120 points for third ahead of a disappointed Sirotkin on 115, Rowland on 101 and King on 100 points, while in the Teams’ standings PREMA extended their lead over RUSSIAN TIME by 275 points to 197, ahead of Racing Engineering on 181 and ART Grand Prix on 173 as the grid looks towards next weekend’s round in Monza.