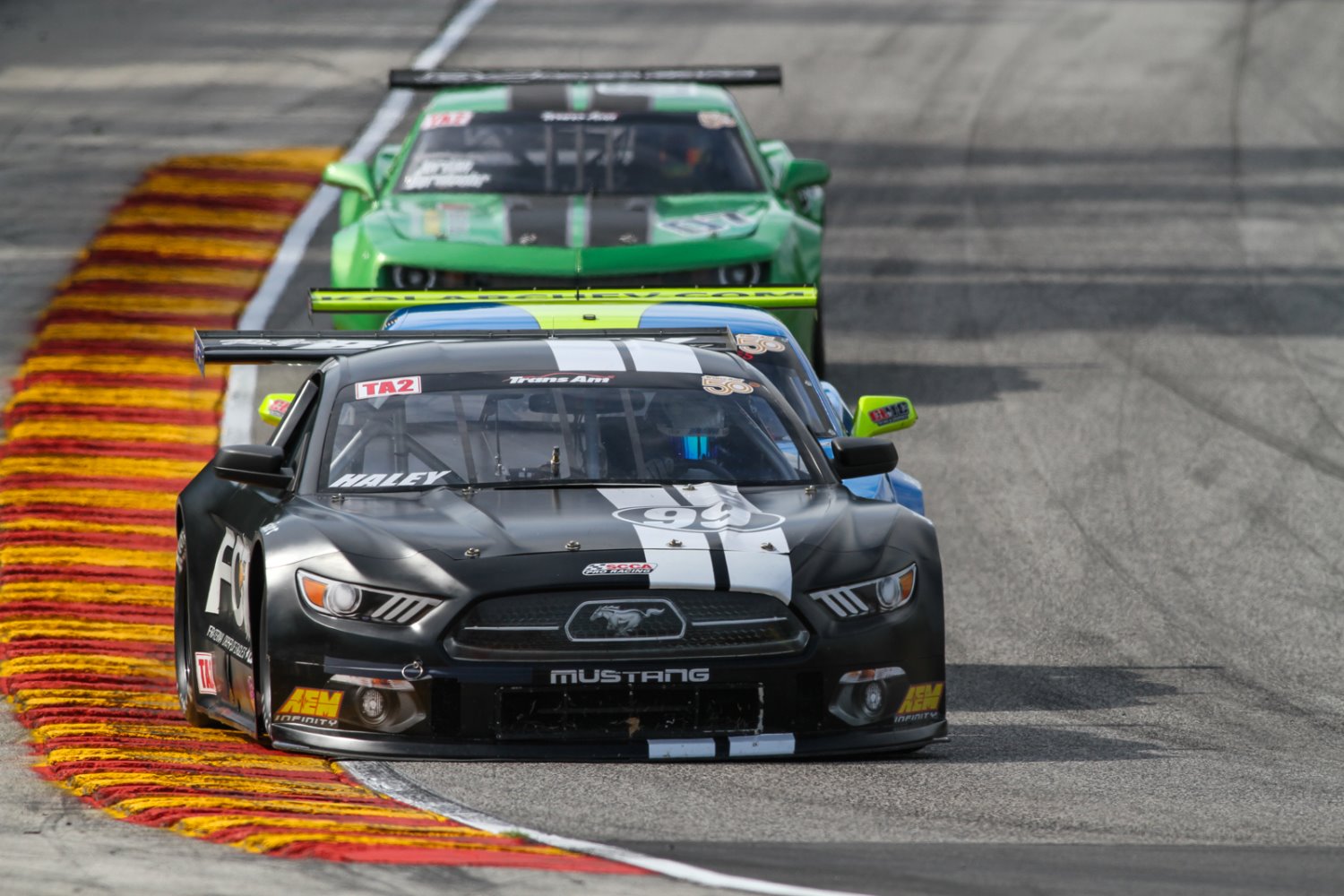 The Trans Am Series held "Fast Five" qualifying for its 45th appearance at Road America in its 50th Anniversary Season with Justin Haley capturing pole in the TA2 class and hometown driver Cliff Ebben replicating the feat in the TA class. Haley will lead the TA2 class out for the 100-mile ETE Reman Muscle Car 100 Presented by Pura Vida Tequila, while Ebben will lead the TA, TA3 and TA4 multiclass field for the Trans Am 100. Cindi Lux and Ernie Francis, Jr., also captured fast laps during the qualifying sessions for the TA3 and TA4 classes, respectively.

In TA2, Justin Haley, behind the wheel of the No. 99 Braun Foundation Ford Mustang, secured his second career Trans Am pole with a final lap flyer passing the checkered flag to the tune of a 2:13.899 lap. The effort one-upped Haley's Mike Cope Racing teammate Lawrence Loshak's 2:14.694 lap, in the No. 5 Pennzoil Platinum/ ETE Reman Chevrolet Camaro, relegating the Milwaukee Wisconsin native to second position to start tomorrow's ETE Reman Transmissions Muscle Car 100.

Haley currently resides fourth in the 2016 TA2 Championship but has only landed on the podium once this year, last round at Mid-Ohio. If Haley can bring the staying power he showcased last round into play with his sheer speed on the Road America circuit, his first career Trans Am victory may be just around the corner with plenty of familiar faces from his rising NASCAR career watching.

Shane Lewis, in the No. 72 Pura Vida Tequila/ 74 Ranch Resort Chevrolet Camaro, will start third after turning a 2:14.912 lap, securing his highest starting position of the 2016 season and a top five position for the Robinson Racing Team.

The remainder of the TA2 Fast Five was secured by two more members of the Mike Cope Team: Tony Buffomante, in the No. 34 Mike Cope Ford Mustang, and Dillon Machavern, in the No. 24 Heritage Motorsports Ford Mustang, with times of 2:15.184 and 2:15.516.

Hometown driver and a nearly perennial podium fixture at Road America, Cliff Ebben, captured his second career Trans Am pole at Road America with a 2:04.088 behind the wheel of the No. 36 Stumpf Ford/ McMahon Group Ford Mustang. Ebben, a native of Appleton, Wisconsin, has two career victories in Trans Am races at Road America, occurring in 2009 and 2011.

So far in 2016, Ebben has been in the running for a first place finish multiple times— with his pole at Road America marking his fifth consecutive. Still, a victory has somehow eluded Ebben this year, with mechanical issues dampening his otherwise stellar efforts, despite currently holding third position in the TA class championship.

Joining Ebben on the front row will be Paul Fix, in the No. 50 StopFlex.com/ TheCarCoach.com/ Techron Chevron Chevrolet Corvette, after turning a 2:05.417 lap of his own. Fix will look to challenge Ebben in pursuit of what would mark his third victory of the year on a track on which in seven attempts he has never finished higher than eighth.

Defending Champion Amy Ruman, in the No. 23 McNichols Company Chevrolet Corvette, will start in third position after turning a 2:05.577 lap of her own. Ruman has seven starts in Trans Am on the Road America circuit, with her best finish coming in 2011 with a third place finish—a mark she will aim to improve upon in a continuation of her points leading championship defense.

Mark Boden, in the No. 47 FallLine/Calypso/Beverage Flavor Intl. Prosche 997 GT3, secured third in the TA3 class with a time of 2:18.375 while Randy Kinsland, in the No. 11 Crossroads Motorsports Chevrolet Corvette, and Randy Mueller, in the No. 0 BizBloom.com/Epic Motorsports BMW M3, completed the Fast Five with times of 2:19.224 and 2:19.387, respectively.

Todd Napieralski, in the No. 39 TREMEC/SKF/Backstreet Chevrolet Camaro, was second quick in TA4 with a time of 2:21.966—just shy of Francis. With the championship perhaps already out of sight for Napieralski, he will eagerly look to play the part of spoiler to Francis' otherwise flawless season.

With the "Fast Five' positions already locked in and secure, the remainder of the Trans Am field will be provided the opportunity to improve their qualifying position with second chance qualifying later today.

all schedule times are central

How to watch on CBS Sports Network