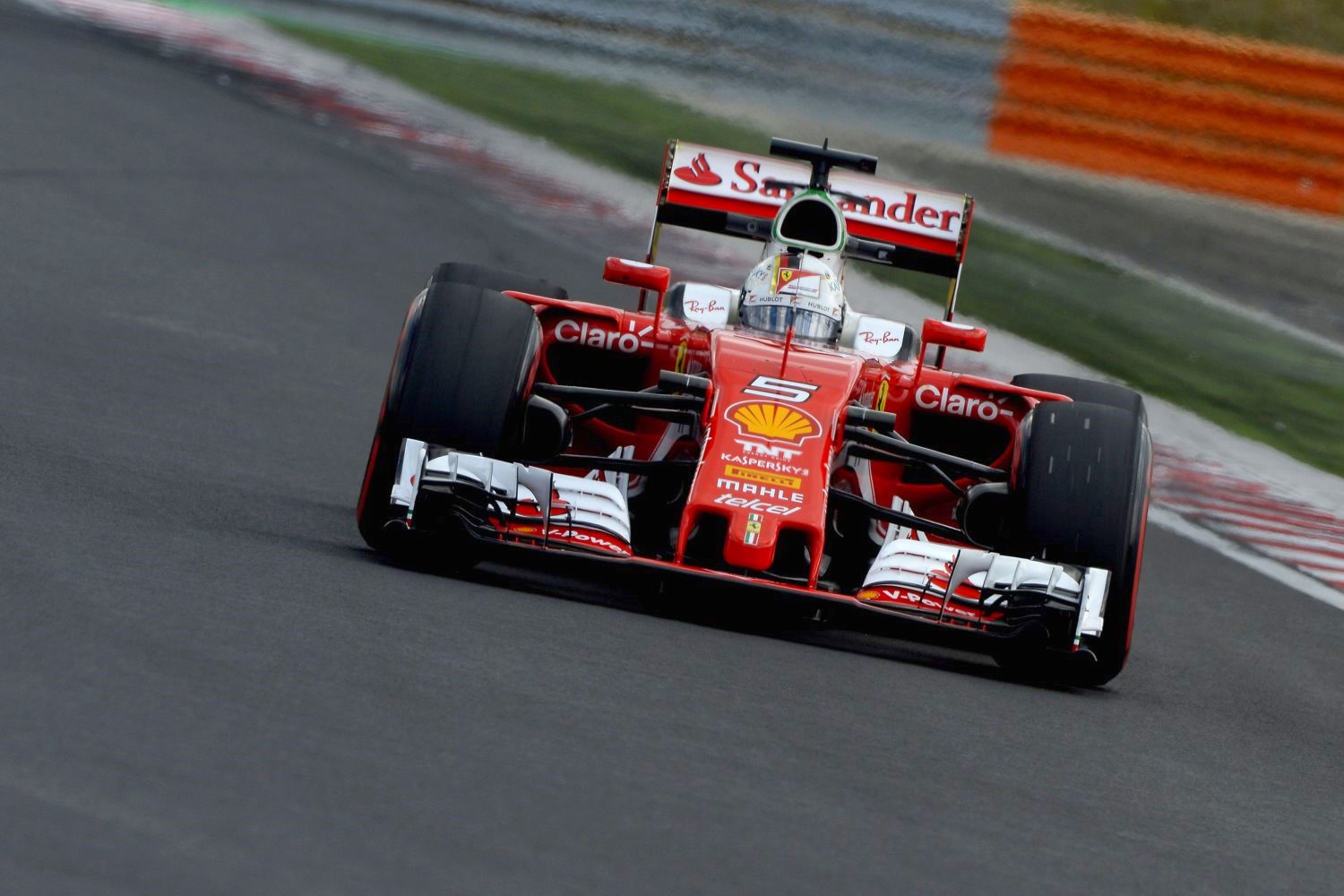 Engine upgrades abound ahead of Spa
(GMM) Ferrari is not the only team taking engine upgrades to this weekend's Belgian grand prix.

We reported earlier that while a new specification will be at the Spa-Francorchamps track, the Maranello team might not actually use it until Monza.

Nonetheless, the upgrade has cost Ferrari all of its remaining 3 upgrade tokens for 2016.

And now Germany's Auto Motor und Sport also reports that two of the three other engine manufactures in F1 – Mercedes and Honda – are also taking new power units to Spa.

That ties in with reports Lewis Hamilton could take a double engine change grid penalty ahead of the race, taking advantage of the latest Mercedes specification after running through his allocation of five units for the season.

Sauber is also taking a shorter nose for its Ferrari-powered car to Spa, while Honda has redeemed some of its remaining performance tokens with the FIA ahead of the weekend in Belgium.

"For our level and the size of our team, we should be with Mercedes, Ferrari and Red Bull," Honda chief Yusuke Hasegawa is quoted by Spain's El Confidencial. "We cannot lose to Force India, Toro Rosso and this type of private team."

Pace step for 2017 'like GP2 to F1' – Hembery
(GMM) Paul Hembery has tipped a huge performance leap for formula one as a result of the rules changes for 2017.

In response to dwindling spectator numbers, the sport collectively agreed that it needs to dramatically speed up the cars next year.

"I think formula one lost a little bit of its excitement," Sebastian Vettel says.

"Right now, the only real motor sport is MotoGP," he is quoted by the Argentinean sports newspaper Ole.

"Formula one must decide whether it is a sport, a show or a test bed for the automotive industry," he added.

The wider cars and tires and bigger wings will speed things up dramatically for 2017, with Pirelli chief Paul Hembery saying the step from 2016 "will be like jumping from GP2 to F1".

He is also quoted by Italy's Autosprint as saying the sporting aspect will rev up in 2017, too.

"Often, changes like these can bring out the differences between the drivers, but I am sure that most of them will say this is what they want — that the challenge is bigger," added Hembery.

Indycar, WEC alternatives fade for Massa
(GMM) Felipe Massa has played down any claims he might keep his racing dream alive for 2017 by switching to Indycar.

As Williams reconsiders its next driver lineup, the Brazilian has said he needs a competitive seat in order to stay in F1 for a sixteenth season.

But Turun Sanomat, a Finnish newspaper, said the door to the works Renault team appears to have been closed to Massa, with the 35-year-old's manager Nicholas Todt and Renault chief Frederic Vasseur having fallen out.

"I'll do what is best for me next year," Massa is quoted as saying by correspondent Luis Vasconcelos.

"I'm not interested in just driving — I want to win races, or at least fight for the podium."

But he said switching to Indycar, where many of his Brazilian compatriots have found a home over the years, is not an option.

"I'm not at all keen about driving on ovals, because I think the risks are too high and the driver's influence is less than on a normal race track," he said.

The report claimed that representatives for Massa recently travelled to the Nurburgring round of the world endurance championship, but were not met with enthusiasm by manufacturers Porsche, Audi or Toyota.

Schumacher's fate 'tragic' – Brawn
(GMM) 25 years after observing the meteoric start to the most successful career in F1 history, Ross Brawn says the fate of Michael Schumacher is nothing short of "tragic".

Brawn, who was Schumacher's technical boss at Benetton, Ferrari and Mercedes, says he was already in talks with the then 22-year-old when, at Spa, he stunned the F1 world by qualifying seventh on debut in a Jordan.

"We (Brawn and Benetton's Tom Walkinshaw) knew Michael from sports cars and so we had a head start over the other teams. We knew that we wanted to have him," Brawn told the German broadcaster RTL in a forthcoming interview.

At Benetton and then again at Ferrari, Schumacher won all of his record seven titles overseen by Brawn, but they were unable to recreate that success when the famous German then returned to F1 between 2010 and 2012.

"We had no doubts about his competitiveness," Brawn said, "but it frustrates me that we were not able to give him the car that he deserved.

"Nevertheless, Michael was a part of the process of Mercedes becoming a world championship team," he added in comments published in advance by Auto Bild.

As for Schumacher's post-retirement fate, including his mysterious current physical condition as the result of a late 2013 skiing fall, Brawn said: "I am in contact with the family.

"I've seen Michael since the accident several times. We pray every day that he is making progress. Life can be cruel," said Brawn.

"He's such a wonderful person, and what happened to him is tragic," he added.

Rosberg questions 'safety freak' Hamilton
(GMM) Nico Rosberg has all guns blazing as he bids to put his world championship campaign back on track at Spa and beyond.

Before the summer break, the German lost his once-significant championship lead to teammate Lewis Hamilton as the British driver strung together four wins.

But Rosberg now says there is a "clean slate" for Belgium and beyond.

"What's happened so far this season is in the past," said the German.

However, he is not quite ready to forget a controversy that happened in Hungary, which was still being discussed a week later at Hockenheim — and now again ahead of Spa.

Rosberg had his pole ultimately confirmed in Hungary, but not before Hamilton complained to Charlie Whiting that the German should have been penalized for not obeying yellow flags.

"Personally, he should have kept to advice from the team and we can obtain that from Charlie as necessary. I don't think there was any harm done. It was just a misjudgment from that point of view," Lowe added.

However, there is clearly some harm in the relationship between Rosberg and Hamilton, as even now Rosberg is still raising the matter with the press.

Rosberg said sarcastically: "I think it's interesting to see how he's become such a safety freak all of a sudden.

"That right after a double-yellow flag, he decides to go to the people in charge and discuss it. He's not known for being such a safety freak," Rosberg is quoted as saying by Ben Hunt, the correspondent for The Sun newspaper.

Rosberg doesn't hide that the Mercedes duo's relationship is frosty.

"It's difficult with so much at stake. I just want to beat him," he said.

Early this year, the British team signed up Volkswagen's world rallying chief Jost Capito to be its new CEO.

The German is now ready to start work on 1 September, but says he is not yet involved in any decision-making at McLaren.

"No, until 31 August, I am still with Volkswagen," he told Germany's Auto Bild.

"That would make no sense. You have to do these jobs completely, otherwise you risk making the wrong decisions," Capito, who earlier in his career worked with Sauber, added.

One of the key decisions for 2017 is the second race cockpit alongside Fernando Alonso, and Capito admitted that he will be involved in making that call.

It is rumored McLaren will replace Jenson Button with Belgian youngster Stoffel Vandoorne, so when asked if the 24-year-old would make a good teammate for Alonso, he answered: "I think Stoffel is ready for formula one.

"He already showed that in Bahrain. I was in Bahrain myself and saw it myself that he did a professional job as though he had been doing it all his life. So he is definitely ready for formula one," Capito added.

Another challenge for Capito will be convincing Alonso to extend his deal beyond 2017, with the Spaniard not having won a title in a decade and declaring that he is no longer enjoying F1 as much as in the past.

Capito answered: "It makes no sense to work with a driver who is not enjoying. But I believe that the new cars will be more fun again.

"I am also convinced that next year's McLaren will not be a bad car. At the moment I don't know the details, but even from the outside you can see that the team has made so much progress."

He said even Honda has stepped up its game significantly, after the awful 2015.

"Honda is still in the learning phase," said Capito, "and also because of the regulations, it is difficult to make big steps during the season.

"But I think the leadership at Honda now understands motor racing and the needs of the team. The cooperation certainly seems to be going very well."

Video: Stoffel Vandoorne on F1 aspirations
Currently competing in the Japanese Super Formula Championship, Stoffel Vandoorne is McLaren-Honda's reserve driver and is tipped to become a hot prospect in F1. Mobil 1 The Grid caught up with Vandoorne at Fernando Alonso's karting track in Oviedo, Spain, to find out more about his desire to race in Formula 1 full-time, following an exciting debut at the Bahrain GP earlier in the year.

The 24-year-old Belgian and reigning GP2 champion has been strongly backed by the British team, and made his grand prix debut for McLaren early in 2016 when Fernando Alonso was injured.

But the Woking team is yet to declare its 2017 driver lineup, amid speculation McLaren will replace Jenson Button with its hotly-rated reserve driver Vandoorne.

At an event ahead of his home Belgian grand prix, Vandoorne warned that he actually might not be a McLaren driver next year.

"My contract expires at the end of 2016," he told La Derniere Heure, a French-language Belgian newspaper.

"So I'm in a fairly comfortable position. If they cannot guarantee me a ride in F1 for 2017, I can go elsewhere."

Asked if that 'elsewhere' might be the works Renault team, Vandoorne answered: "Yes, or elsewhere. There are still other free seats, but I can't tell you anything more.

"The only thing I can confirm is that I have to drive in F1 next season. And I hope with all my heart that it will be at McLaren."