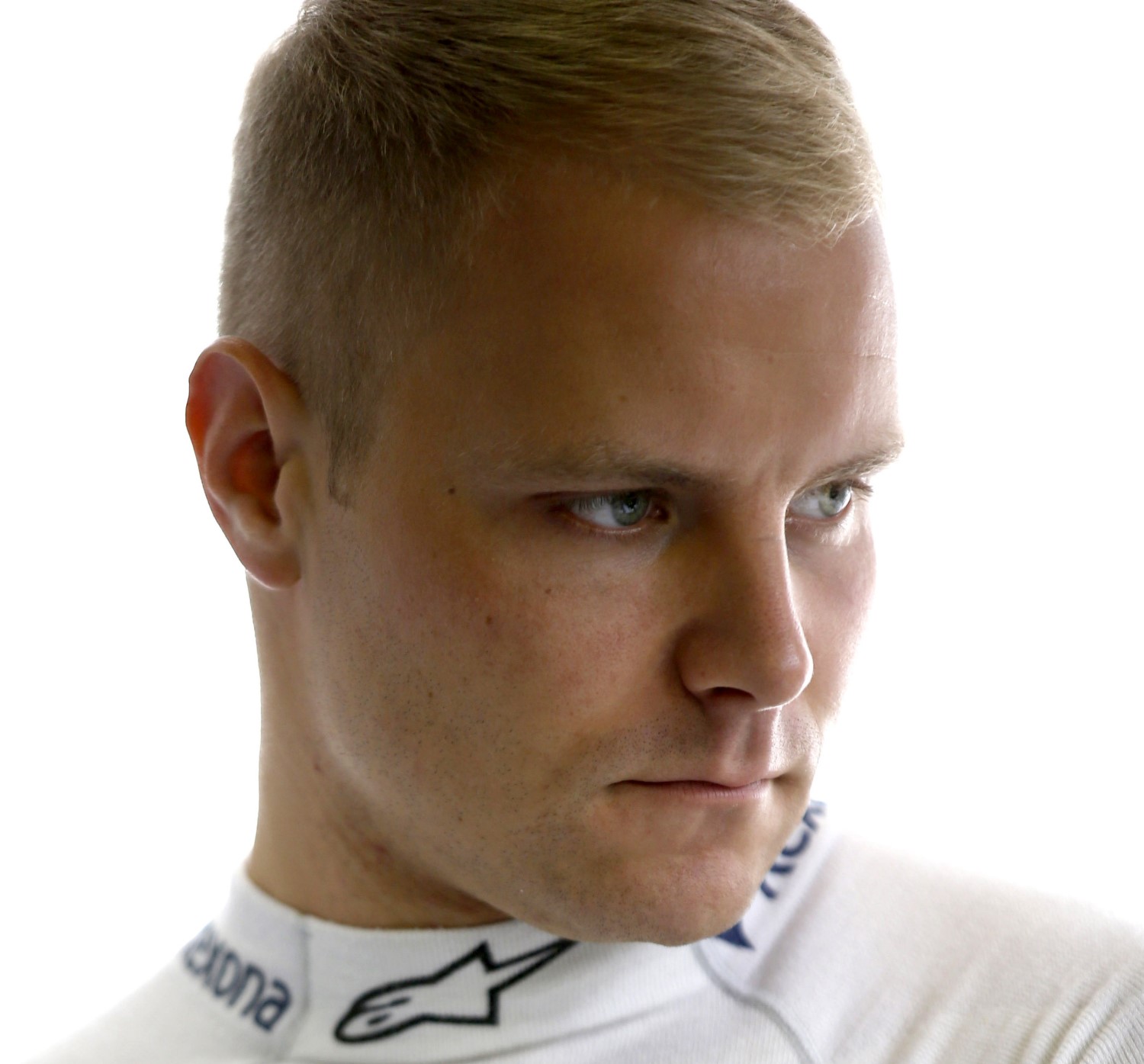 F1 race to avoid dead last heats up
(GMM) Even at the very back of the grid, a spicy and crucial battle is taking place.

The glory and the mega dollars may be at the upper echelons of the grid, but right at the bottom of the table, a battle for survival is taking place – simply to avoid last place.

Traditionally, Manor has been the clear backmarker, but now with a more stable team and a Mercedes-promoted ace in the form of Pascal Wehrlein, the former Marussia outfit is clear of the pointless Sauber.

And the driver lineup has now been boosted for the latter portion of the season, with Mercedes' other junior Esteban Ocon drafted in to replace the out-of-funds Rio Haryanto.

Auto Bild, a German publication, claims Mercedes is effectively conducting a 'shootout' at Manor over whether Wehrlein or Ocon will ultimately replace a works driver in 2019.

That may help in the battle with Sauber, a traditionally solid midfield performer that this year battled for mere survival until it was bought out by a mysterious investment group.

The first signs of life are now emerging.

Sauber has announced that Xevi Pujolar, an experienced engineer who was ousted by Toro Rosso when Max Verstappen stepped up to Red Bull, has been signed.

"We've had a rough time these past few months and the first target of course of the new owners is to settle matters, stabilize the entire group and then of course get back to business as usual with a basis for being competitive," said team boss Monisha Kaltenborn.

But in reality, 'business as usual' is urgent, with the Swiss newspaper Blick claiming that the difference between dead last in the constructors' championship and tenth being about $35 million.

Kaltenborn plays this down.

"We still have a few things to do this year, we don't want to end up where we are," she said. "But we are focusing more on next year and I am very confident you will see a lot more then."

As the sport emerges from its summer slumber, minds are being cast back to 25 years ago, when as a 22-year-old the F1 legend made his meteoric debut for Jordan at Spa, qualifying seventh and launching his record-setting grand prix career.

Schumacher, of course, went on to win at Spa-Francorchamps a record six times, and in 2004 clinched his final and seventh drivers' world championship at the track that was not far from his German birthplace.

That was when he raced for Ferrari, whose long-serving priest is Don Sergio Mantovani, also a well-known figure in the F1 paddock through the years.

"Michael is still a hero here (at Maranello)," Mantovani told the German newspaper Bild am Sonntag.

"He loved Ferrari and we Italians love him."

"What we saw as a driver and certainly what is true still today is that Michael is a fighter," Mantovani added. "I know he believes in God, but doesn't go to church."

As for Schumacher's current condition, he commented: "I know probably more than I want to say, but recently I have had no contact. I still pray for Michael.

"Why this is happening to him and how it will proceed, only God knows the answer," Mantovani said.

The Modena priest was also asked about Schumacher's son Mick, and said: "I have been following his racing and hear he is doing well in Formula 4.

"Of course, he is missing his dad right now at the race track and in life, but these are all tests from God. I am sure that he will make his way."

Hamilton expecting more 'ups and downs'
Lewis Hamilton says he expects more "ups and downs" over the second half of the season, though is entering this weekend's Belgian Grand Prix full of confidence.

Hamilton, pushing for a fourth championship, and third in succession, hopes to continue where he left off as Formula 1 returns to action at Spa-Francorchamps.

"It's crazy how quickly this year is going by," said Hamilton.

"It seems like a few weeks ago we were in Barcelona for winter testing and now we're through the summer break, heading to Spa.

"The first half of the season was a bit of a rollercoaster, so it's great to be in the position I'm in with more than half of the races behind us.

"There will be more up and downs to come, I'm sure. But the way myself and the team have performed so far gives me huge confidence.

"I'm feeling refreshed, re-energized and ready to go after a fun few weeks off, so hopefully everyone else has had a good rest too and we'll come out fighting.

"Spa is a great track – one that every driver enjoys.

"It was great to finally get back on the top step there last year, so fingers crossed I'll be able to have another strong race this time around."

Hamilton is keen to add to a summer of success for Great Britain, after its record-breaking performance at the Rio Olympic Games, and Cal Crutchlow's maiden MotoGP win.

"It's been such a proud few weeks for British sport, with the Olympics and then Cal Crutchlow becoming the first British MotoGP winner in more than 30 years," he added.

"I'll do my best to keep the flag [Union Jack] flying this weekend."

Rosberg: Belgian GP marks 'clean slate'
Nico Rosberg has described the second half of the campaign as a "clean slate", as he looks to overhaul Mercedes team-mate Lewis Hamilton for the world title.

Rosberg enjoyed a run of seven straight wins over the tail-end of 2015 and into 2016, at one stage leading Hamilton by 43 points in this year's championship battle.

But a sequence of more challenging races, which included penalties in Britain and Germany, and Hamilton's surge in form, have seen Rosberg fall 19 points adrift.

As the Formula 1 paddock reconvenes at Spa-Francorchamps this weekend, after the annual summer break, Rosberg is hopeful of returning to his early-season form.

"For me, it's like a clean slate at this stage," said Rosberg.

"What's happened so far this season is in the past.

"I can't wait to get in that car, put my foot down and get everything I can from these next races

"Belgium is a great place to kick start the year after the break. It's such an awesome track, with so many challenges and usually some crazy weather just to mix things up even more.

"If you ask any driver they will tell you how much they love racing here.

"And, if you look back through the years, there have been some great moments too – that mega move from Mika HÃ¤kkinen on Michael Schumacher down the Kemmel straight, for example.

"All of that history just makes it even more special, so I'd love to add my name to the winner's list.

"I'm feeling strong in myself, I know I'll have the best car out there and I'm massively pumped to be back on track, so let's see how it goes."

Red Bull and Sauber have the smallest Super Soft allocations, taking six sets per driver, with all others on seven, bar Force India's Nico HÃ¼lkenberg, on eight sets, and the Haas drivers, on nine sets.

Soft selections range from two to five sets per driver, and Medium selections one to three sets.

For next weekend's Monza event, which follows the Belgian Grand Prix in a back-to-back sequence, Pirelli has allocated a set of Soft and Medium tires for the race, and a set of Super Softs for qualifying. 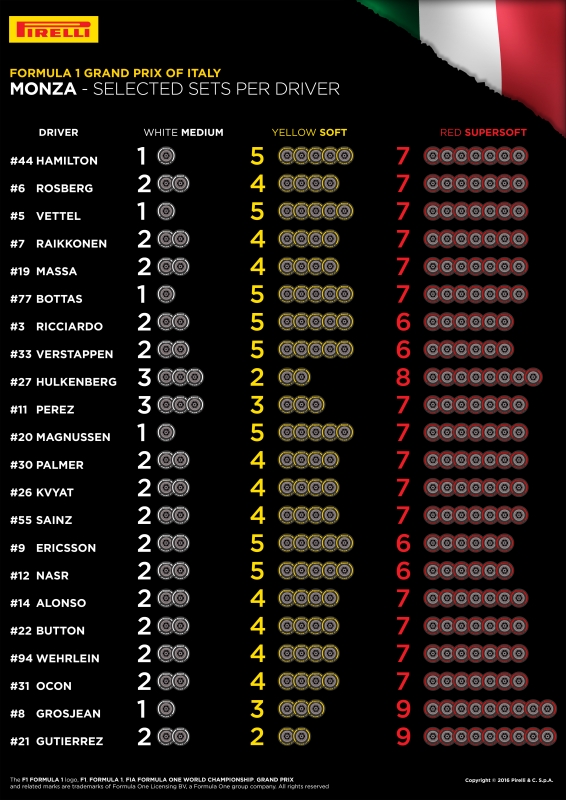