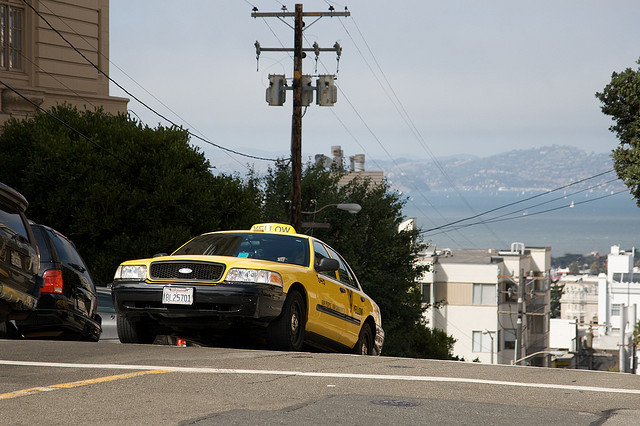 Uber Technologies Inc. will begin using self-driving taxis to ferry customers around Pittsburgh as soon as this month, a first for the industry in a race among automobile and technology companies to make driverless cars commercially available writes Greg Bensinger and Jack Nicas of The Wall Street Journal

Uber’s service, using specially-equipped Volvo XC90 sport-utility vehicles and Ford Focus, would appear to be the first time that commuters could hail a ride in a driverless car. But while the effort signals a breakthrough in commercialization of the technology, it won’t be a brave new world of robot cars: Two Uber employees will be sitting in the front seat of each vehicle.

One Uber employee will be in the driver’s seat with hands on the steering wheel as an emergency backup, another observing from the passenger seat, the company said. Uber will only make a few cars available to start–with the eventual goal of having 100 in Pittsburgh and possibly elsewhere in the coming months–and they will only go limited distances within the city.

The test, which could begin in as soon as two weeks, is limited. The autonomous vehicles may be assigned at random based on customers’ preference, the start location and the length of the trip.

Uber Chief Executive Travis Kalanick said the technology is necessary to lower the cost of ride hailing and car ownership, even if it means the future loss of jobs among Uber’s 1.5 million active drivers world-wide.

“The technology is going to happen because the promise is so real," Mr. Kalanick said in an interview. “It’s existential. We have to have all the best minds working on this."

As part of that effort, Uber said it acquired Ottomotto LLC, a startup that is working on self-driving tractor trailers. Anthony Levandowski, Ottomotto’s chief executive and a co-founder of Google’s driverless car project, will become the head of Uber’s automated-vehicle efforts. Terms of the deal weren’t disclosed.

The announcements are an attempt by Uber to claim pole position in a contest to implement technologies some observers think are years away from safe, widespread use.

General Motors Co., which has invested $500 million in Lyft Inc., Uber’s chief rival, plans to test driverless Chevrolet Bolt taxis with its partner next year using technology it acquired earlier this year in a $1 billion deal for startup Cruise Automation Inc. Ford Motor Co. this week set a goal of producing fully self-driving fleet vehicles with no steering wheel or pedals within the next five years.

Volvo Car Corp., owned by China’s Zhejiang Geely Holding Group Co., has been aggressively developing and advocating for automated car. As part of its announcement, Uber said it struck a $300 million deal with the Swedish auto maker to co-develop additional autonomous-driving SUVs.

Uber doesn’t plan to make autonomous vehicles. Instead, it aims to build the software powering self-driving cars and forge partnerships with auto makers. For the Pittsburgh trial and elsewhere, Uber will buy cars and provide the self-driving technology.

Separately, a federal judge on Thursday rejected a proposed $100 million settlement between Uber and drivers in two states, reopening the debate over the car-hailing company’s freelance labor model.

Alphabet Inc.’s Google founded its driverless-car team seven years ago and its vehicles have amassed more than 1.8 million miles in automated driving, yet it hasn’t said when it will bring the technology to market–or even test it with consumers.

“The difference is Uber is in the business today of transporting people and trying to do it as cheaply and efficiently as possible, and this is technology that is existentially important to them," said Karl Iagnemma, chief executive of Cambridge, Mass-based nuTonomy, which is testing self-driving taxis in Singapore. He said Uber’s plans to start rides so soon also signals that the company’s existing self-driving software likely is more advanced than previously thought.

Uber also aims to be a full-fledged logistics firm, not simply a ride-hailing service. Uber drivers deliver packages and food in several cities, but Mr. Kalanick has said driverless vehicles “should be used to move all the things."

Ottomotto’s Mr. Levandowski said it isn’t clear when his company’s self-driving truck technology would be deployed. Uber issued stock to Ottomotto, which goes by Otto, that could be worth up to 1% of the company if goals are met, according to a person familiar with matter, implying a value of around $680 million based on Uber’s most recent $68 billion valuation.

Proponents of driverless vehicle technology promise a suite of benefits from reducing deaths and congestion to environmental conservation. But much of that depends on software that isn’t yet battle tested and the willingness of regulators.

Indeed there have been some high-profile accidents involving autonomous or semiautonomous vehicles, such as a fatal one in Florida involving Telsa Motors Inc.’s driver assistance software earlier this year.

State regulators largely don’t prohibit self-driving cars. In Pennsylvania, where Uber’s trial is taking place, driverless cars are OK as long as they follow the rules for regular vehicles, including that a licensed driver is behind the steering wheel.

Uber, founded in 2009, only plunged seriously into the autonomous-driving race last year. It recruited researchers and scientists from Carnegie Mellon University, which is based in Pittsburgh, hired the hackers who wirelessly took control of a Jeep in 2015, and earlier this year named former Ford executive Sherif Marakby to head its global vehicle programs.