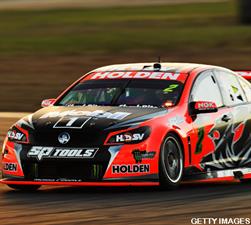 The future of Australia's "most famous motor racing team is in doubt" after Holden ended a 26-year partnership with the Holden Racing Team in a "bombshell announcement" that will see the seven-time Bathurst winner stripped of its name, according to James Phelps of the Sydney DAILY TELEGRAPH.

On a "dark day," HRT lost in excess of A$2M ($1.54M) a year in support when Holden announced "it would not be backing the team" for the first time since '90.
Red Bull Racing Australia will become the Red Bull Holden Racing Team "after winning an exclusive three-year deal to become Holden’s only fully backed-factory team."
HRT is "now fighting to secure its future and is already understood to be chasing"
Toyota in a "determined bid" to remain a Supercars powerhouse. The team was "left without a major sponsor" for next year in a blow that "also could cost" it drivers James Courtney and Garth Tander. Both the former Supercars champions "are off-contract at the end of the year and free to follow Holden at the door" should they be able to find a more attractive deal. DAILY TELEGRAPH,

DECLARING WAR: Phelps reported in a separate piece Nissan "is expected to declare war on Holden" by becoming the next car manufacturer to sign a new deal with Supercars in a "major coup" for Australian motorsport.

Holden ended months of speculation about its future in the sport by signing a new three-year deal to "continue racing two Commodores" with all-conquering team Triple Eight Race Engineering.

Holden's decision to not follow Ford and Volvo in quitting the sport will reportedly "also see Nissan ink a new deal to become the second manufacturer on the grid" in '17.

Holden is "expected to race an all new V6 Commodore" from '18 with an imported Opal Insignia tipped to "replace the famous Australian car in a rebadging exercise" that will see the car become a direct competitor of Nissan’s Altima.

A Nissan source said, "It looks as though they are going to go down the path we are on now." Nissan is "off-contract at the end of the year and have spent the last 12 months reconsidering their future in the sport" DAILY TELEGRAPH