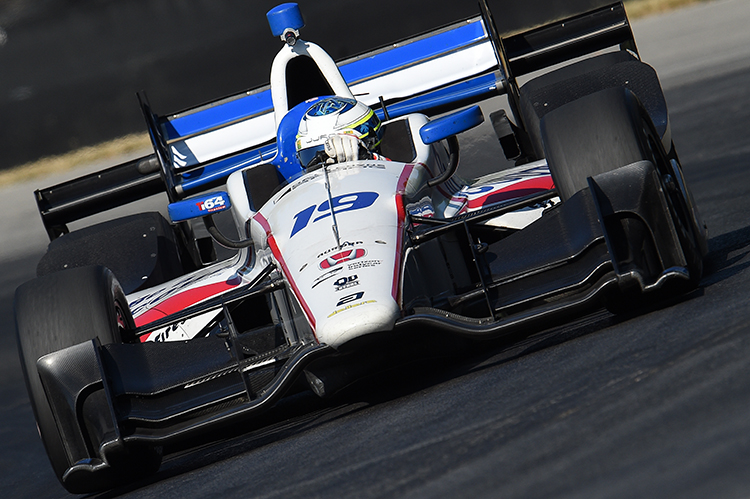 Following a one-day test at Mid-Ohio last week, Enerson was confirmed by team owner Dale Coyne as the driver of the #19 Boy Scouts of America car for the Mid-Ohio round, the Indy Lights graduate will be joining fellow American and full-time DCR driver Conor Daly.

Contrary to Daly, who turned his first laps ever at Mid-Ohio at the test last week, Enerson has previous racing experience at the 2.258-mile, 13-turn road course.

The 19-year-old has won at Mid-Ohio in both USF2000 and Indy Lights, which was also his first win in that series.

Enerson, who raced in USF2000 from 2012 to 2014 and in Indy Lights all of last season and part of this year turned his first laps in an Indy car last Thursday ahead of this weekend's debut in the Series.

Enerson, along with teammate Daly, will be on track starting Friday, July 29 with two practice sessions.

Qualifying for the Honda Indy 200 will take place on Saturday, July 30 and will be broadcast live on NBCSN.

What they have to say:

Conor Daly – #18 Jonathan Byrd's Hospitality & Restaurant Group
"This seems to come as a surprise to a lot of people but this will be my first time racing at Mid-Ohio, so it was nice to be able to test there last week. We got through a lot of things that we haven't been able to get to on a race weekend because they're big changes that take time, so it's good to be able to start with more information as we go into the weekend. This will be the first road course/street course that we've got to test at and then race at, so that will be really nice.

"I think everyone is going to be so, so close. It's one of those road courses that people have been driving on for years and it's been the same for so many years. I think the field is going to be closer than ever which is hard to believe. We just have to do our best to start up front again and try to stay up front this time and get another solid finish under our belt.

"I was really enjoying the track during the test. It's a very physical place and I'm sure it will be hot this weekend so the physical side will be really tough. The track itself is really fun and it flows together really well. Hopefully we can put on a good race for everyone that comes out."

RC Enerson ???????? #19 Boy Scouts of America
"I'm happy to join Dale Coyne Racing this weekend. I didn't think we'd be able to get a ride in 2016 and to be able to do an IndyCar race before trying to go for a full season next year. So it's amazing to be able to get that experience now. On top of that, Mid-Ohio is probably the best track for me to move up at because it's one of my favorites. I've always done alright there, coming off a win last year I think it's a little bit extra motivation.

"I don't know what it is about the Mid-Ohio track but my driving style fits really well. Every time I've raced there, we were always up front. It has elevation changes and the long flowing corners, it's a fun track.

"I think the test went really well. The biggest thing I need to work on is practicing hitting my marks in the pit stops. That's kind of tough to do especially in the race when you have all the pressure on you. I think getting comfortable in the car was the biggest thing for me at this test and then getting used to how much more physical it actually is. I can do an Indy Lights race and feel alright but after one day in an Indy car, I did 118 laps, I was really tired, so that was kind of an eye opener too.

"The biggest thing I am most looking forward to is running with some of the guys that I grew up watching. My first Indy 500, I was three years old and you look at all these guys that have been in it for so long like Helio and Tony Kanaan, it's like wow. You look around the paddock and think you're going to be racing with those guys. It's going to be a big step up." DCR PR