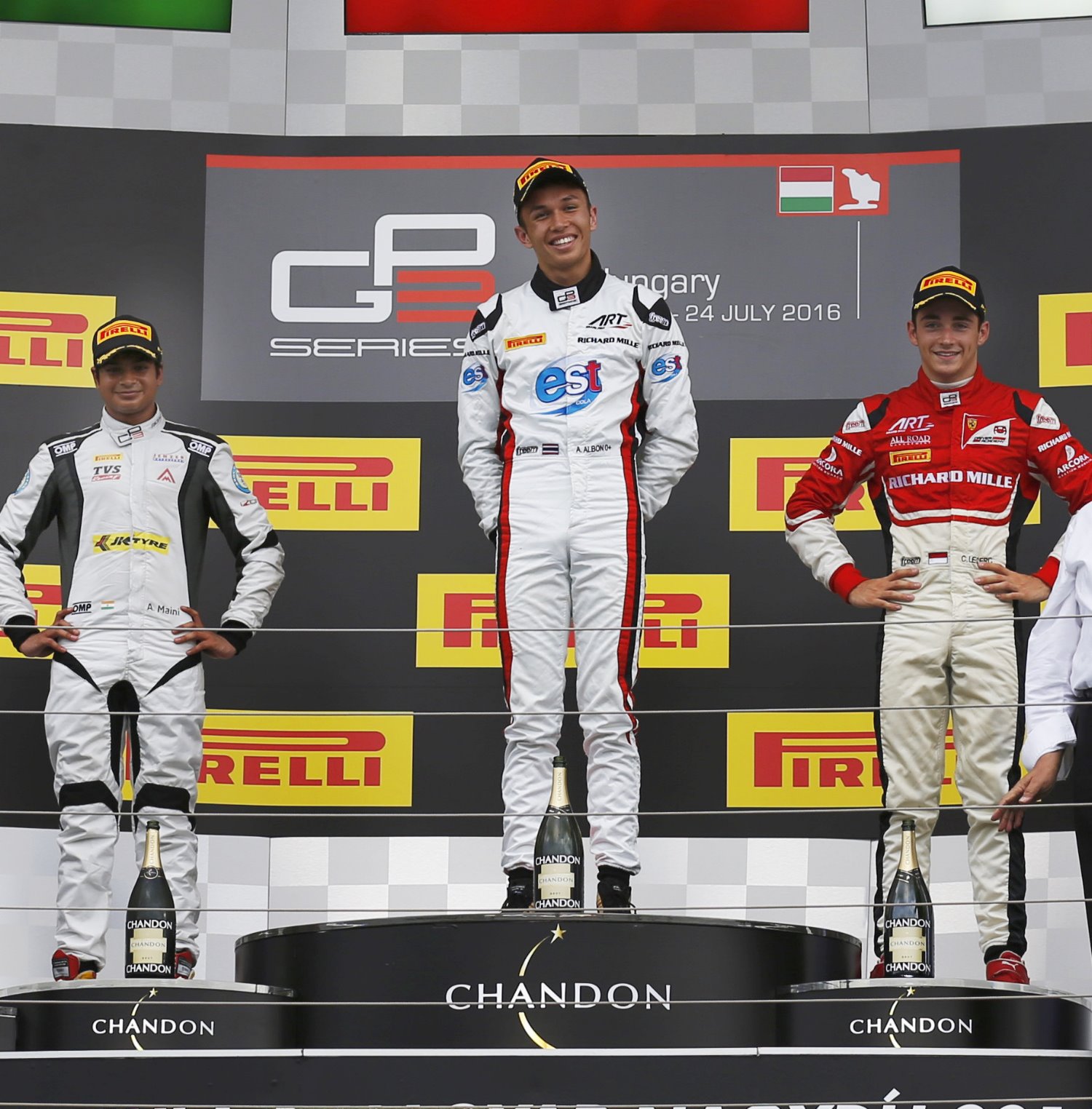 Thai rookie Alexander Albon leaves Budapest a happy man after clinching the GP3 Series lead after pocketing his third victory of the 2016 season. The ART Grand Prix ace started from P2 on the front row and made a great getaway to pass Jenzer Motorsport’s Arjun Maini for the lead of the race. From then on; he drove a mature and controlled race and bagged fastest lap in the process to head the Drivers’ Standings. Maini achieved his maiden GP3 podium whilst ART Grand Prix’s and Scuderia Ferrari Team development driver Charles Leclerc was third.

Slightly cooler temperatures greeted the paddock this morning with Maini starting from reverse pole. The Indian made a clean getaway but Albon fired away from his slot to move into P1. Leclerc remained in P3 ahead of Ralph Boschung. Akash Nandy was caught up in a start-line incident when his car received contact which flipped his Jenzer Motorsport machine over. The safety car was deployed whilst the Malaysian driver was able to get out of the car unaided.

The safety car was deployed for a handful of laps in which his car and debris was cleared away. As the safety car was just about to pull in, Boschung tagged the rear of Leclerc’s car twice. Both drivers were able to continue but the Swiss driver lost several positions in the process as well as damaging his nose cone. The Koiranen GP driver was subsequently given a drive-through penalty for the incident which dropped him down the back of the pack.

Albon’s advantage at the front was just under 1s with Leclerc hot on the tail of Maini. The Thai’s lead was reduced to 0.6s at one point with Albon and Leclerc trading fastest laps throughout the race – both eager to add a further two bonus points to their tally.

Leclerc locked up whilst trying to find a way past Maini, which gave Arden International’s Jack Aitken the opportunity to close in on the Monegasque and add some pressure for the final spot on the rostrum. In the final five lap,s Albon began to increase his margin at the front to over 2s with Maini looking settled in P2. Leclerc had his mirrors full of Aitken as Albon began posting further fastest laps.

At the checkered flag, Albon crossed the line 3.3s ahead of Maini with Leclerc completing the rostrum. Aitken, Nirei Fukuzumi, Matthew Parry, Jake Dennis and Matevos Isaakyan rounded out the top eight.

Albon now holds a three point advantage over Leclerc in the title battle with Antonio Fuoco in third. ART Grand Prix maintain their huge lead in the Teams Standings with Koiranen GP and Trident in second and third respectively.

GP3 Series is back in action next week for Round 5 at the Hockenheimring on July 29-31.