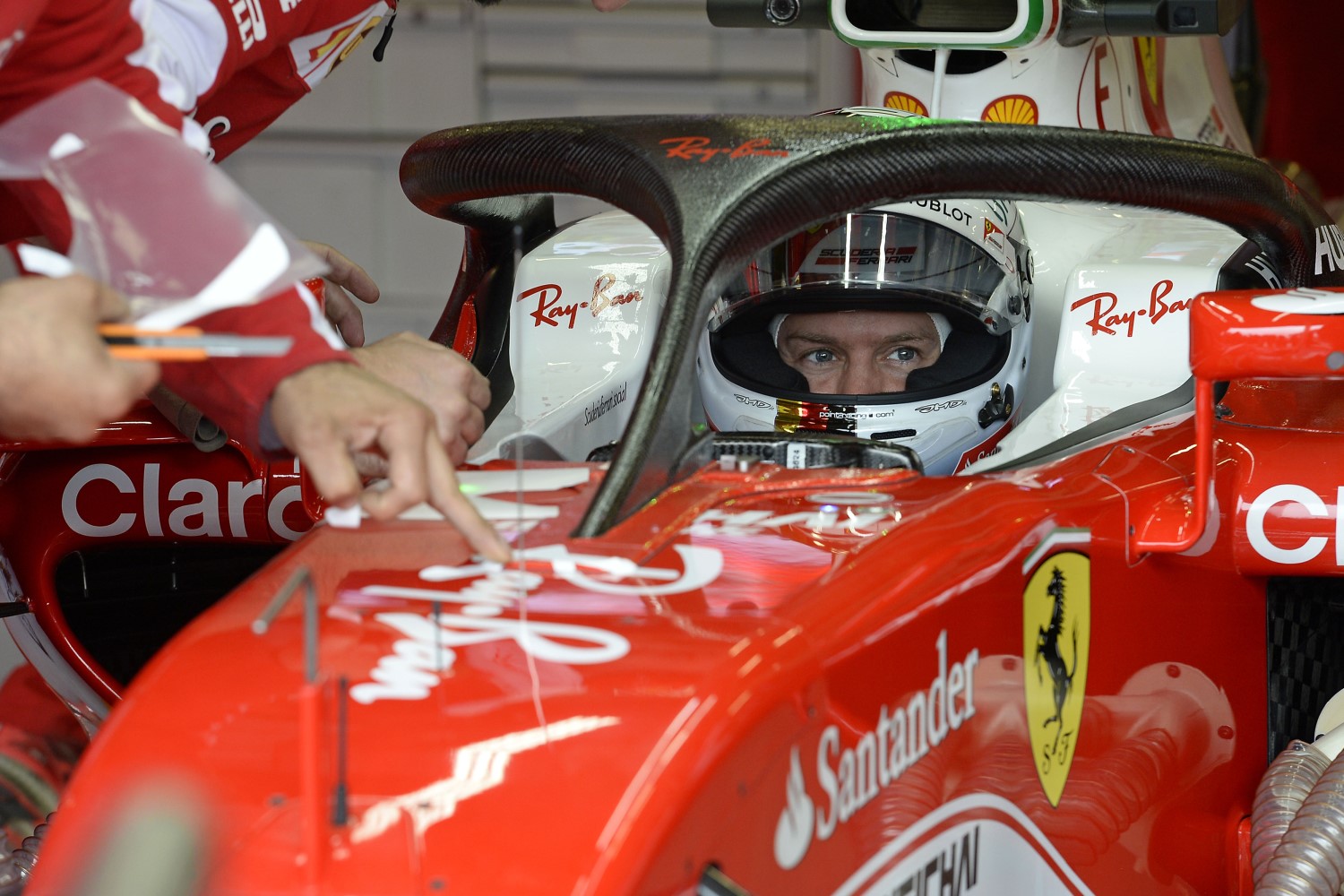 F1 to vote on 'Halo' next week
(GMM) F1 is preparing to vote on the issue of whether or not to introduce the 'Halo' cockpit protection for 2017.

In the drivers' briefing in Hungary, Charlie Whiting and FIA officials showed a presentation that included shocking images and figures that said survival chances increase by 17 per cent with the controversial system in place.

The strategy group will vote next Thursday in Geneva on whether to introduce Halo, and sources report that the commercial rights holders and some teams will vote for a delay of at least one year.

Toro Rosso driver Daniil Kvyat admitted in Hungary that the FIA presentation was "very convincing", but he said he is yet to be fully convinced.

"I don't know if, with the introduction of Halo, we are going too far," said the Russian.

"I may be tempting fate, but I have often said that, coming to the track, I am aware that this could be my last day at work. It seems that now that feeling is dulled.

"I'm not acting like a hero, but after all we are in the race for the fans and for formula one — it is also a show. That is why it is so popular," said Kvyat.

Germany's Auto Motor und Sport claims the strategy group will vote next Thursday on the third development of the 'Halo', after Red Bull's alternative solution called the Aeroscreen was scrapped completely.

The report said that in the latest tests, a flying wheel broke the Aeroscreen and struck the dummy driver's head.

Perez admits Renault 'interesting option'
(GMM) Renault has emerged as Sergio Perez's main alternative in the event that he does not stay at Force India in 2017.

Force India supremo Vijay Mallya moved to end speculation when he said recently that Mexican Perez is definitely under contract for next year.

The Indian's comments had followed rumors that Perez was first in line should Ferrari not keep Kimi Raikkonen.

In Hungary, 26-year-old Perez admitted that Ferrari had been an option.

"From the outside it seemed that Kimi was not doing the right results but the team knows more about what is happening with its drivers.

"Ferrari is a team that is not as competitive as they want — we all want to see them fighting for victories. I think now they live a difficult moment, we heard that James (Allison) will leave and maybe to go Renault, I don't know," added Perez.

Fascinatingly, Perez continues to insist that although Mallya is right that he has a 2017 contract, his future is also in the hands of his powerful Mexican sponsors.

"Let's see this summer what is best for me," Perez said in Hungary.

"I'm in a team with great potential, I trust the team and I would like to stay another season here, but I have to analyze and see what is best for my future."

Perez mentioned Ferrari technical director Allison's potential switch to Renault, and curiously the Mexican driver is also linked with a move to Enstone.

"It is definitely an interesting team," Perez admitted.

"They are not going through a good time, but if they will be competitive then it may be an interesting option. I want to be world champion," he insisted.

Wehrlein not surprised about Rosberg news
(GMM) Pascal Wehrlein says he was not surprised when he heard in Hungary that Nico Rosberg is staying at Mercedes for the next two years.

Asked by the German website motorsport-magazin.com how he heard the news, Manor driver Wehrlein answered in Budapest: "This (Friday) morning. Just like everybody else."

Wehrlein, 21, is strongly supported by Mercedes and was widely regarded as the obvious choice had Rosberg not been retained by the German team.

But he said he is not disappointed.

"No, because it was assumed that his contract would be renewed. It means I have a bit more time to get used to F1," Wehrlein added.

Even though Mercedes is locked up for now, the next step for Wehrlein remains unclear. He could stay at Manor, but it has also been rumored that he could move to the similarly Mercedes-powered Force India, to replace Sergio Perez.

"My future is still totally open," he admits.

"I have a one year contract with Manor and I don't know yet what I will do next year. I think the first talks will take place after the summer break."

Apparently on the brink of joining F1's championship-winning team, rookie Wehrlein's performance in 2016 has been mixed and he admits his future is unclear.

"If someone (a driver) buys into the (Manor) team and there is no place for me, I can't do anything," he admitted.

"I think I have done a good job. I scored a point for the team, which really could not have been expected, but you never know what the future holds."

Alonso still suffering pain from Melbourne crash
(GMM) Fernando Alonso has admitted he still feels the effects of his huge crash in Australia.

The Spaniard walked away from the rollover smash but missed the following race in Bahrain with broken ribs and a partially collapsed lung.

He has since declared that he is back to 100 per cent, but 34-year-old Alonso has now admitted to The Sun newspaper that "I still have pain in my ribs".

"When I'm driving and have to use some muscles around the ribs I still feel it is not normal, like the other side," Alonso explained.

His former teammate Lewis Hamilton had a comparatively minor hit against the barriers in practice for the Hungarian grand prix on Friday, visiting the medical center for an all-clear.

"In MotoGP they drive with broken ankles and collarbones and here we have a sore little finger and they don't want you to race," the Mercedes driver declared.

"Fortunately, I have no problems," Hamilton is quoted by Germany's Focus. "The medical team did a great job."

Mercedes held a margin of 1.5 seconds in FP1, and six tenths in FP2, with Nico Rosberg ending the day on top after Lewis Hamilton's crash.

"We need to better in sectors one, two and three – there is not one sector that stands out," said Vettel, on the subject of Ferrari's deficit.

"I am not entirely happy with the balance, so naturally if the balance comes more together I think we can improve overnight and in sectors one, two and three.

"It's not a surprise that Mercedes is good here."

Vettel says it is important that Ferrari focuses on itself, rather than worry about Mercedes' pace or whether Red Bull has a faster package at the Hungaroring.

Asked if Red Bull is more of a threat than ever, the four-time World Champion replied: "I don't know, today is Friday and I don't value Fridays all that much.

"Looking at ourselves, we need to improve here and there.

"It's quite obvious that Mercedes was very competitive in the morning and afternoon. I haven't seen the long runs, but we need to work on ourselves and see where we are."

Raikkonen ended the day sixth, seven tenths down on Vettel.

"We can still improve, but overall it was not too bad," he said.

"I haven't seen the times. We know that Mercedes are fast. I'm certain we can improve. How much they improve tomorrow is another case. We'll see what happens."

Ricciardo sure Red Bull is second best
Daniel Ricciardo says he and Red Bull are "where we expected to be" after finishing second to Mercedes during Friday practice in Hungary.

Red Bull had a low key first session, with Ricciardo and Max Verstappen back in fifth and sixth, as it completed its running on the Soft tyre.

But the outfit emerged as Mercedes' main challenger in second practice, as it joined Ferrari in using the red-marked Super Soft rubber.

Ricciardo finished six tenths down on Rosberg, after Lewis Hamilton crashed, but over three tenths clear of Ferrari's Sebastian Vettel.

"We would like to be a bit closer to Mercedes, but we're sitting second best.

"We're a bit quicker than Ferrari today, so I think we're more or less where we expected to be. We knew it would be close to Ferrari, but if we can keep our nose in front, that'd be nice."

He added: "I would say [the gap to Mercedes] is pretty genuine. If we're close on Friday it sort of doesn't change too much on Saturday. I would say today is quite representative."

Ricciardo reiterated that his aim is to finish on the podium at the Hungaroring.

"That's definitely the target and hopefully it's me this time," he added.

"I think we looked OK. It was not great on the Super Soft, but the Soft was looking better. I had a little bit going on in the last run, but generally we're in a pretty good position for a Friday."

Verstappen finished three quarters of a second adrift of Ricciardo in fourth position, but explained that he lost a chunk of time on his best lap due to a mistake in the final sector.

"P1 started quite easily. P2 was much better, and we were closer to Mercedes, so it was quite a good day, and the long runs were looking pretty good," he commented.

"The difference in time was I made a mistake in last sector, I went off track."

On his hopes for Saturday, Verstappen said: "I want to improve the car and to improve myself. It will be difficult. Ferrari is not too far away, but we'll see what happens."

Bottas crossed the pit entry line after the designated bollard, while Sainz Jr. re-joined the track after initially peeling in, prompting the stewards to investigate both incidents.

As outlined by the FIA, "drivers must stay to the right of the bollard at the pit entry when entering the pits", while the "dotted white line across the pit exit is the track edge."

Both drivers were deemed to have breached the regulations, with Williams' Bottas handed his first reprimand of the season, and Toro Rosso's Sainz Jr. given his second.

Sainz Jr. picked up his first for a pit exit infringement in Spain.

Any driver given three reprimands in a season will receive a 10-place grid penalty for the current or next event, though only if two or more were for driving infringements.