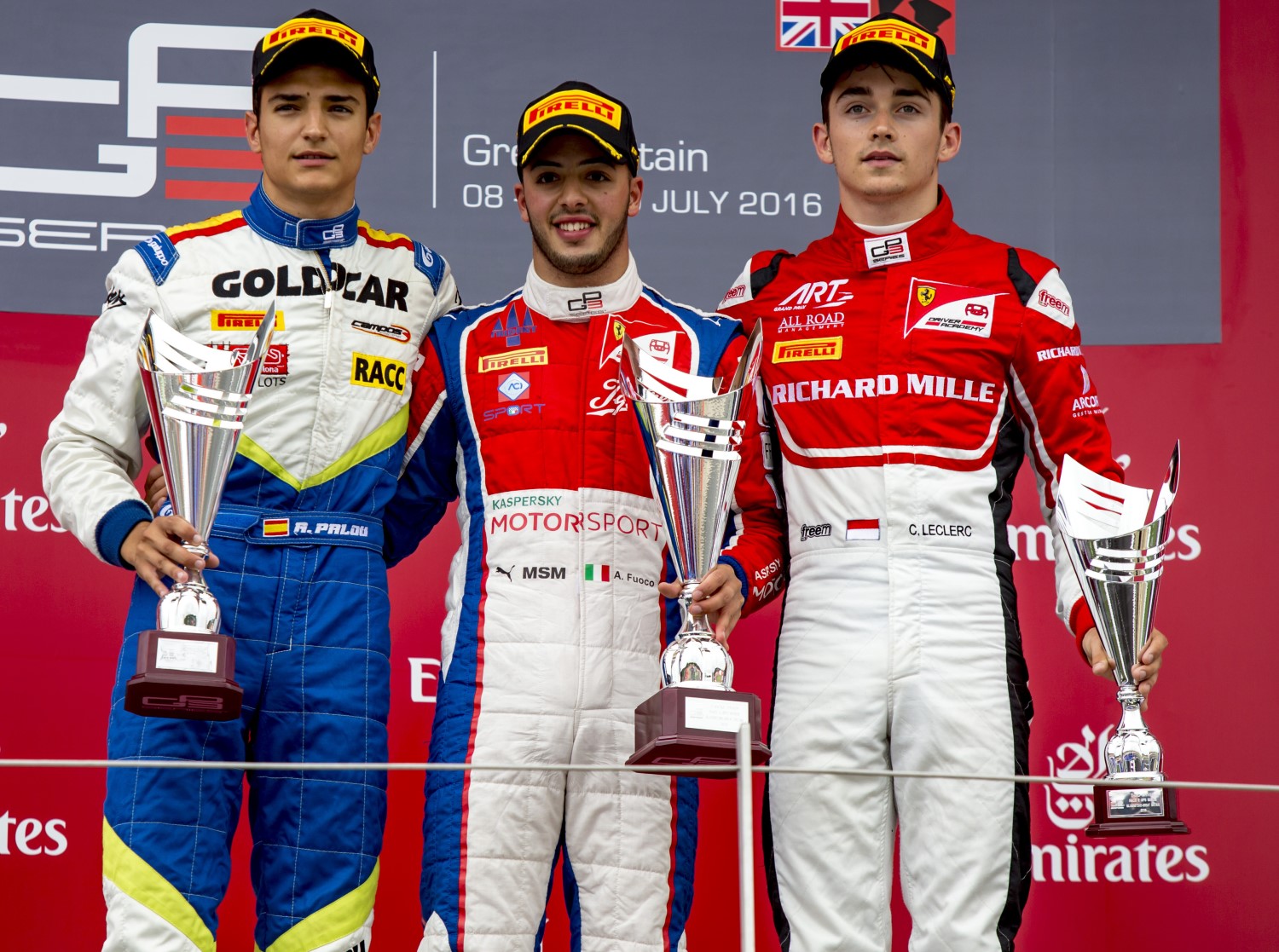 The Italian national anthem played out as a jubilant Antonio Fuoco celebrated his first win in the Series after a storming drive in Silverstone Race 2. The Trident star had started from sixth place on the grid and fought through in difficult conditions on a drying track. The race went to time and the Ferrari Driver Academy ace passed Campos Racing’s Alex Palou who had led the large majority of the race. ART Grand Prix’s Charles Leclerc completed the rostrum and goes back into the lead of the drivers’ standings.

Jenzer Motorsport’s new recruit Arjun Maini started from reverse pole but it was Trident’s Sandy Stuvik who took the lead into T1. Scuderia Ferrari Team development driver Leclerc was up to second from seventh on the grid after passing the Indian driver early on during the opening lap. Palou made a lightning start from P10 to run in third after also passing Maini.

Contact was made between Maini and Koiranen GP’s Matthew Parry; the Brit was penalized with a 5s time penalty. There was a short Virtual Safety car period when Giuliano Alesi and Jake Hughes made contact; with the Frenchman having to retire. Once the VSC had ended, Palou brilliantly passed Stuvik around the outside for the lead of the race after also passing the Monegasque driver.

Parry who had looked racy all weekend had passed Leclerc and then wasted no time in passing Stuvik. Leclerc and then Fuoco were next to pass the Thai driver, as Parry from second had to come into the pits after being shown the black and orange flag for a damaged front wing after the incident with Maini.

Leclerc began hunting down Palou for P1, with Fuoco and Arden International’s Jake Dennis hot on his tail. The ART Grand Prix racer reeled in the Spaniard as he began posting fastest laps; but then suddenly he had his mirrors full of the Italian Fuoco as he lost some ground to the Campos driver. Fuoco chanced an opportunistic move on his Monegasque rival, but Leclerc was wise and took the position back almost immediately. There was a second VSC period after Jenzer Motorsport’s Akash Nandy spun in the gravel at Maggots.

Once the VSC had ended, the top three of Palou, Leclerc and Fuoco were glued together; the Spaniard ran wide at Turn 3 but did enough to retain the lead. Dennis in fourth, received a tap from Ralph Boschung which sent his Arden machine into a spin; the Swiss driver was later penalized for the incident.

As the race went to time; Fuoco was on a mission and got the pass done on Leclerc around the outside and set after race leader Palou. The Spaniard ran wide at Stowe and the Italian grabbed his opportunity to sneak into the lead after carving his way through the pack. The battles continued as the ART Grand Prix of Nyck de Vries and Leclerc had a great dice, with the Dutchman passing his teammate for P3. The duo then passed Palou for the final places on the rostrum, however, the Dutchman had received an earlier time penalty so dropped down to P8 in the final classification.

There was some confusion as the checkered flag was shown one lap too early; therefore the positions were classified from the time the flag was waved: this meant Palou finished second, ahead of Leclerc. But nobody was to deny Fuoco’s day as the Italian’s excitement was clear to see after being overjoyed to achieve his maiden win. Palou claimed his and Campos’s first points of the season with Leclerc completing the rostrum.

DAMS’ Santino Ferrucci posted his best result in his rookie campaign with fourth as did Steijn Schothorst in fifth. Jack Aitken, Nirei Fukuzumi and De Vries completed the final points in the top eight. The busy month of July continues with two more back-to-back races, the first of which is in Budapest on July 22-24 2016.