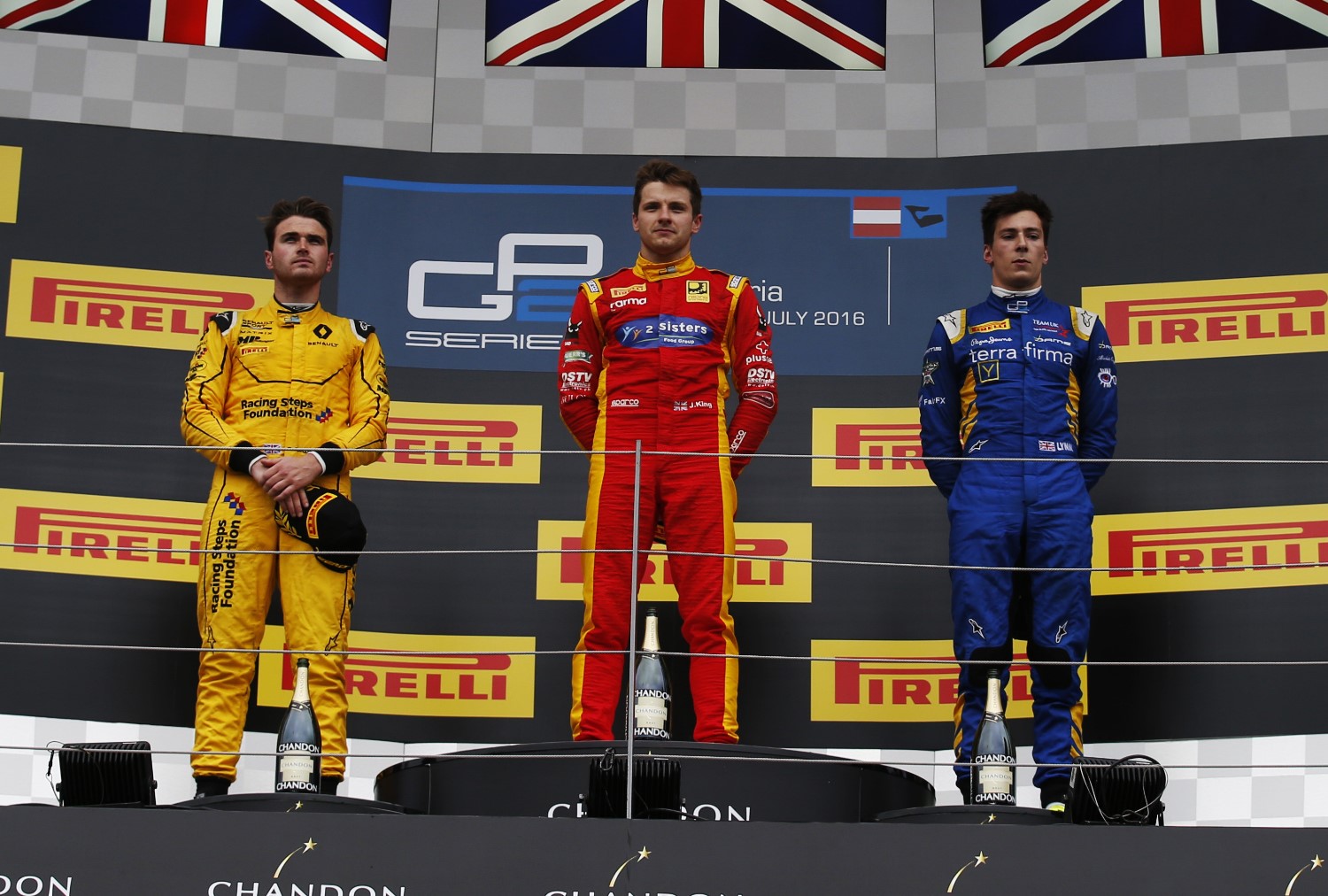 Jordan King has converted pole position into his maiden win in this morning’s Sprint Race in Spielberg, but he had to work the whole way: denying the soaking conditions which saw the race start behind the safety car, the Manor test driver set a string of fastest laps to dominate the race to win by 6 seconds from Oliver Rowland and Alex Lynn.

The grid formed under heavy rain conditions which saw spins on the way out on track: inevitably the decision was made to start the race behind the safety car as the rain slowly lightened, going live on lap 3. King defended immediately after a slightly slow getaway, but teammate Norman Nato was unable to take advantage given the volume of water on track. Sean Gelael and Arthur Pic came together on the top of the circuit, and when yesterday’s podium man spun into retirement the safety car was brought back out to give marshals time to deal with his beached car.

Two laps later the race was live and King was not looking back: the Briton set a string of fast laps to break away from the pack and set up a lead that was not to be denied. Behind him Nato was falling back, with Rowland, Raffaele Marciello and Luca Ghiotto all finding a way past in the tricky conditions over the next few laps, while Lynn was also on a charge, sliding up into the points by disposing of Sergey Sirotkin, Mitch Evans and teammate Nicholas Latifi before bringing the two groups together by coming out on top of a huge battle with Ghiotto for P4 on lap 17.

With the rain stopped and the fast drying nature of the circuit in evidence the teams were all telling their drivers to cool their wet tires wherever they could, but would anyone be brave enough to switch to slicks? Artem Markelov was the first man to gamble, just before another safety car period following Latifi’s spin at Turn one gave the others outside the points the chance for a punt, with the race going live again one lap later.

Lynn was on a charge and claimed Marciello’s scalp after running side by side across the top of the circuit, while behind them Sirotkin, Evans, Pierre Gasly and Antonio Giovinazzi were squabbling over the final points paying positions. King didn’t look back and recommenced his incredible pace over the closing laps (slower only than the drivers on slicks) to rebuild his lead: with Rowland unable to stay with him King won by 6 seconds, with Lynn unable to stop Rowland scoring his best result to date. Marciello stayed out of trouble late in the race for P4, but Giovinazzi was on fire in the closing laps to move up from P9 at the restart to P5 at the flag, ahead of Sirotkin, Gasly and Evans, all of whom picked up a position when Ghiotto spun on the final corner of the race, undoing all of his good work.

Marciello leaves Spielberg with the lead in the drivers’ title fight on 66 points, ahead of Evans on 56, Nato on 55, Markelov and Rowland on 54, Giovinazzi on 53 and Lynn on 51 points, while in the teams’ competition RUSSIAN TIME leads Racing Engineering by 120 points to 100, ahead of PREMA Racing on 99, Pertamina Campos Racing on 80 with DAMS and ART Grand Prix on 72 points as the grid heads to Silverstone.