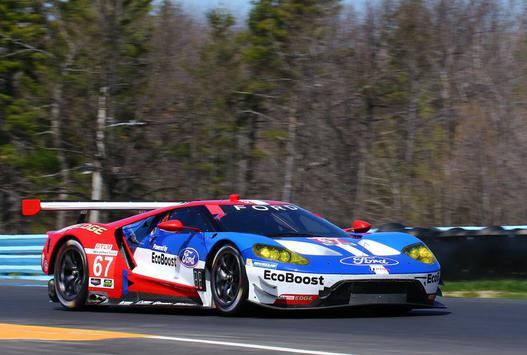 Coming off of class victories at both the most recent IMSA WeatherTech SportsCar Championship GT Le Mans (GTLM) class event and the 24 Hours of Le Mans, Ford Chip Ganassi Racing is looking to continue that momentum when it returns to Watkins Glen International for Sahlen’s Six Hours of The Glen, Round 3 of the Tequila PatrÃ³n North American Endurance Cup (FS1, live, Sunday at 10 a.m. ET).

Ford celebrated the 50th anniversary of its 1966 triumph at Le Mans by winning the GTE Pro class with drivers Joey Hand and Dirk Mueller, who will share the No. 66 Ford GT at The Glen. Richard Westbrook and Ryan Briscoe won the most recent GTLM race at Mazda Raceway Laguna Seca – the first victory for the new Ford – and will pair at The Glen in the No. 67 Ford GT. Westbrook is riding a two-year streak at WGI, previously winning overall for Visit Florida Racing in a Corvette Daytona Prototype in 2014 and 2015.

Ford also has a winning legacy in the event on the 3.4-mile road circuit. A Ford GT40 won the first Six Hours of The Glen back in 1968, with Jackie Ickx and Lucien Bianchi teaming for John Wyer.

“We’ve got pretty good momentum," Hand said. “We had the quickest car at [Mazda Raceway] Laguna [Seca], but we just ran short on fuel and our sister car made it. We went to Le Mans having high hopes, and we had good pace there and we did the race with no mistakes. We did what Chip always says, ‘Do the obvious things right.’

“We kept ourselves clean and had a huge win. For me personally, Watkins Glen is one of my favorite tracks. Now they repaved it. We tested there before we went to Le Mans, and it was super fast, super smooth and even more fun to drive. With all that stuff, I think we’ve got a pretty good recipe for a shot at another win there."

Risi Competizione and Corvette Racing also will be competing at The Glen in the same cars they ran at Le Mans. Giancarlo Fisichella and Toni Vilander, second in class at Le Mans, will co-drive the No. 62 Risi Ferrari 488 GTE. Corvette Racing’s Tommy Milner and Oliver Gavin come to The Glen leading the GTLM standings by 12 points, winning at Daytona and Sebring in the No. 4 Corvette C7.R. Teammates Antonio Garcia and Jan Magnussen were second at Daytona in the No. 3 Corvette C7.R.

Porsche North America will field a two-car entry, the No. 911 Porsche 911 RSR for Nick Tandy and reigning WeatherTech Championship GTLM champion Patrick Pilet, and the No. 912 for Earl Bamber and Frederic Makowiecki.

BMW Team RLL will have the No. 25 BMW IHG Rewards Club BMW M6 GTLM for Bill Auberlen and Dirk Werner, and the No. 100 IHG Rewards Club entry for John Edwards and Lucas Luhr. The No. 25 car will have a patriotic livery to celebrate the Fourth of July, paying tribute to the stars and stripes paint scheme on the BMW M3 GTR that Auberlen, Boris Said and Hans Stuck drove to victory in the 2001 Petit Le Mans at Road Atlanta.

Completing the GTLM entry is the No. 68 Scuderia Corsa Ferrari 488 GTE for Alessandro Pier Guidi and Daniel Serra, who finished second to Westbrook and Briscoe at Mazda Raceway in May.

Coming off a class victory in the 24 Hours of Le Mans, Scuderia Corsa will bring back Jeff Segal to the No. 63 Scuderia Corsa Ferrari 488 GT3, joining GT Daytona (GTD) championship leaders Christina Nielsen and Alessandro Balzan.

The trio won the most recent event in the PatrÃ³n Endurance Cup, the Mobil 1 Twelve Hours of Sebring Fueled by Fresh From Florida. That victory – coupled with the 2014 GTD class victory in the Rolex 24 At Daytona and winning at Le Mans alongside 2015 WeatherTech Championship GTD champions Bill Sweedler and Townsend Bell in a Scuderia Corsa-prepared Ferrari – added Segal to the short list of drivers who have scored class victories in all three events.

“We’re riding a big wave of momentum, winning at Sebring and Le Mans," Segal said. “Definitely good mojo, and Watkins Glen is probably my favorite track in the U.S. I haven’t tested there since it was repaved, but I hear it’s spectacular. We’ve got a super-strong pairing. Ever since Scuderia Corsa arrived at the end of 2012, they’re always been in the hunt. You bring in Christina – who was their top challenger for the title last year – and you’ve got the best possible combination of people and it’s working great so far. I’m happy to be along for the ride."

Stevenson Motorsports and Robin Liddell are riding a four-year winning streak at The Glen. Liddell and Andrew Davis will co-drive the No. 6 Stevenson Auto Group Audi R8 LMS GT3, and will be joined by Lawson Aschenbach and Matt Bell in the team’s No. 9 Audi. The team won the GRAND-AM Rolex Sports Car Series GT class in 2012 and 2013, with Davis joining Liddell in the latter triumph, and the duo won the GS class of the IMSA Continental Tire SportsCar Challenge in both 2014 and 2015 in a Chevrolet Camaro Z/28.R.

Alex Job Racing leads the Porsche contingent with a two-car entry. Cooper MacNeil, Leh Keen and Gunnar Jeannette co-drive the No. 22 WeatherTech Porsche 911 GT3 R, with Mario Farnbacher, Alex Riberas and Ian James in the No. 23 Team Seattle/Heart of Racing entry. Also racing Porsches are Park Place Motorsports with the No. 73 for Patrick Lindsey, Joerg Bergmeister and Matt McMurry, and Black Swan Racing with the No. 540 Papent.com/Fine Arts Enterprises/Boston Athletic Club Porsche for Timothy Pappas, Nicky Catsburg and Andy Pilgrim.