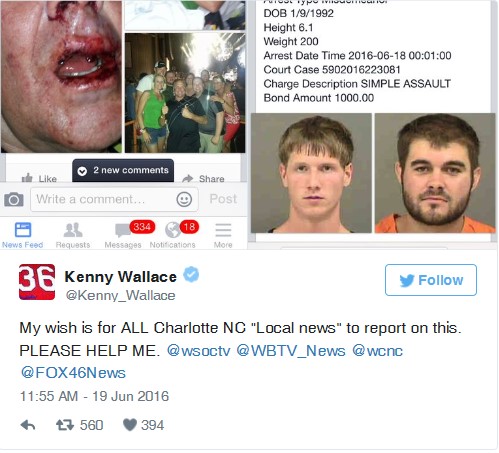 UPDATE An Indian Trail company says it’s being unfairly maligned on social media since one of its more than 70 employees was accused of participating in an assault on NASCAR driver Mike Wallace and his daughter Lindsey.

“The efforts being made to disparage our business and negatively impact its hardworking employees is both disturbing and uncalled for," Lucas Lawn and Landscaping said in a news release.

Lucas Lawn and Landscaping said it’s been the subject of online “verbal attacks" since the postings by Mike Wallace and others. Some have called on the company’s clients to pull their business. Others urged anyone considering using the company to find another firm.

“If you are planning on hiring someone for a landscaping project, I would NOT recommend Lucas Landscaping out of Indian Trail," said a Concord resident’s Facebook post. “Here’s a photo of their latest work! That is Mike Wallace after he was attacked by 3 men who beat him and his daughter after a concert in Charlotte.

The company said such attacks are unfair because it had nothing to do with the incident.

Lucas Lawn and Landscaping said blaming the company “is, in our opinion, a mechanism being used to point blame at those who had no involvement in the matter and, simultaneously, deflect any inquiry into the actions and behavior that may have occurred at the time the situation arose by those making the accusations."

The company said it was “saddened" it had to issue a news release, “but it does, unfortunately, appear that Mr. Wallace and his supporters intend to have this matter resolved in the court of public opinion."

It was unclear Tuesday which of the Lucases charged in the case works for the company. Lucas Lawn and Landscaping’s annual report filed with the N.C. Secretary of State’s Office lists a Paul D. Lucas Jr. as president.

The company’s voice mailbox was full Tuesday. The office of lawyer Kenneth Swain, who issued the news release for the company, didn’t reply to a request by the Observer for comment.

LUCAS LAWN AND LANDSCAPING STATEMENT
“Indian Trail, NC – On Friday, June 17th one employee of our company was accused of being involved in an assault upon one Mike Wallace and Lindsey Wallace Van Wingerden. Since that time Mr. Wallace and various other individuals have chosen to post statements, comments and opinions regarding the circumstances on social media websites. This has resulted in verbal attacks upon our business, suggestions that our clients abandon our company and innuendo regarding our business that we believe is designed to both frustrate the proper administration of justice within our court system and prevent our company from continuing to do business where we employee over 70 individuals who work hard and depend upon their jobs to support themselves and their families.

“This situation arose at an event that did not involve our business or the operation of the business in any way. The efforts being made to disparage our business and negatively impact its hardworking employees is both disturbing and uncalled for. This is, in our opinion, a mechanism being used to point blame at those who had no involvement in the matter and, simultaneously, deflect any inquiry into the actions and behavior that may have occurred at the time the situation arose by those making the accusations.

“Our company takes the actions of its employees, both on and off the clock, seriously and we plan to diligently and appropriately evaluate all of the accurate and undisputed information. However, we respectfully ask that those who rely on social media postings and one sided representations of fact CONSIDER the motivations behind those efforts. No one at our business would expect those who patronize the business of another to vilify or otherwise judge that business based upon what are solely accusations and finger pointing at any one or more of their employees. We feel certain that if a similar situation were occurring to Mr. Wallace, he would be asking for a fair and reasoned approach that included both sides of the equation, not just the one desired by the complaining party. We ask that a rational and objective assessment of the matter be considered before taking actions, as suggested by others, that would harm our professional activities and the families who gain support from our business operations.

“We are saddened that we have felt the need to engage in this release but it does, unfortunately, appear that Mr. Wallace and his supporters intend to have this matter resolved in the court of public opinion. This is NEITHER FAIR NOR appropriate for any of the parties involved to include mr. Wallace himself. This is especially true related to our business which had absolutely no involvement in the matter. We hope that the public will do as we intend, by gathering facts that are properly vetted.

“Our company supports our system of justice and believes that it will operate in an unbiased and objective manner in determining just which individuals may have been at fault in this situation. As suggested above, we believe that efforts to undermine our system, including the verbal attacks on our business, should be viewed dimly and questioned wholeheartedly.

06/19/16 Three men have been arrested in the beating of NASCAR driver Mike Wallace and his daughter after a concert Friday night in Charlotte, N.C.

According to the Charlotte-Mecklenburg Police Department, Nathan Lucas of Indian Trail, N.C., and Randolph Mangum of Monroe, N.C, were arrested early Saturday and both charged with simple assault in the incident.

Paul Lucas (no address listed) was arrested on Friday night and charged with assault on a female.

In a Facebook post, Wallace said he and his daughter, Lindsey Wallace Van Wingerden, were leaving a Rascal Flatts concert Friday night at PNC Music Pavilion in Charlotte when they were attacked in the parking lot.

Wallace said the men left the scene in a white truck with logos from a company called Lucas Landscaping in Indian Trail.

Mike Wallace FB post
I normally would not post personal affairs but this is to help and give advice to our friends, do not ever talk to a group of now what appeared to be drunk or drugged up young adult men or women when you’re trying to get in your car to leave the un guarded PNC amphitheater in Charlotte, NC parking lot after a good Rascal Flatts concert. This is what I looked like after I was knocked out and crap beat out of me. The ambulance driver took this picture we were just supposed to have a fun night. I want to thank my family and friends for helping to protect me from a worse beating as I layed unconscious on the ground.

What’s worse is three of guys that beat my family up were arrested and out of jail before we were out of the hospital.

The white truck they were driving had the business name of LUCAS LANDSCAPING – Indian Trails, NC on the doors, so be careful according to the CMPD this is the third time this year at PNC this group has been involved in an altercation.

Everyone please be careful in the future and take care of your friends that you go somewhere with.

Wallace, 57, has not competed this season. He has 197 starts in the Sprint Cup Series, four wins and 494 starts in the Xfinity Series and five wins and 115 starts in the Truck series. He is the brother of NASCAR drivers Rusty Wallace and Kenny Wallace. Motorsport.com