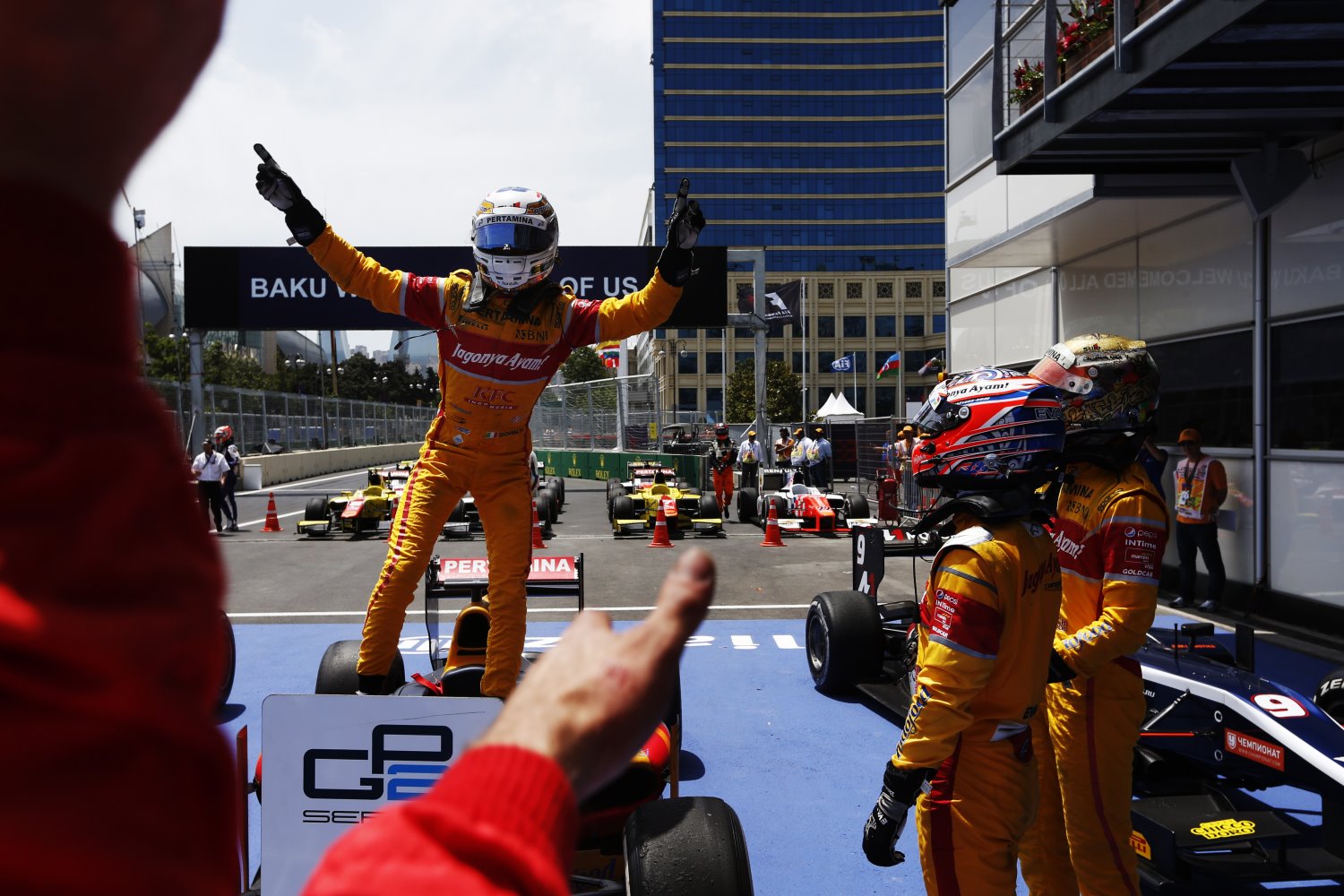 Italian Antonio Giovinazzi claimed debut victories for himself and PREMA Racing in the first ever race at the new Baku circuit in today’s feature race, losing the lead when the lights went out before keeping calm and fighting back as so many of his rivals struggled to win ahead of Sergey Sirotkin, who claimed second on the line from Raffaele Marciello.

Giovinazzi made life hard for himself with a poor start from pole, gifting the lead to Nobuharu Matsushita from Marciello as the poleman dropped to P6 with Sirotkin caught out by his slow getaway and falling back to P8 as Norman Nato spun at the first corner, triggering chaos: Sergio Canamasas and Pierre Gasly hit the Frenchman (who eventually continued) and were out on the spot, as were Alex Lynn, Nicholas Latifi and Marvin Kirchhofer, who all had nowhere to go but into the barriers to start the first safety car period.

At the restart Marciello made short work of his Japanese rival, claiming the lead into Turn 1, with the pair swapping the lead a few times before the Italian could solidify it, while Giovinazzi was starting his fightback by taking advantage of a mistake from countryman Luca Ghiotto to claim P4 behind Oliver Rowland before a second SC period to remove Philo Paz Armand’s car from the wall, handing everyone a free pitstop to remove their super softs.

Arthur Pic and Artem Markelov made tremendous stops to jump up the order at the restart, but the Frenchman locked up and the pair came together as he chopped across the Russian’s front wing: the contact put them both out of the race and prompted another safety car to deal with the debris. Nabil Jeffri’s alternate strategy of starting on the harder compound was paying off as he was in P3 at the restart and was looking for more: he and Rowland dove inside Matsushita at Turn 1, towing Giovinazzi through at the next corner before using his fresher rubber to jump the Malaysian for third on track. Jeffri’s good work was undone by tire wear over the next few laps before retiring in an escape road on lap 14 with no rubber left.

Sirotkin was slowly carving his way through the field, determined to make up for the disappointments of the first two rounds, as was Giovinazzi: the Italian ran outside Marciello at turn one for the lead on lap 18, ahead of Rowland and Sirotkin. The Racing Engineering teammates came together further round the lap and Nato finished his race in the wall at the chicane, bringing out the safety car one more time. The race was now going to time limits, restarting for the last time on lap 24 with 12 drivers sprinting together to the flag in two laps time.

Giovinazzi ran deep at Turn 1 but just held position from Marciello, running four wide into Turn 2 with Sirotkin slipping past Rowland and Mitch Evans mugging Matsushita behind them for P5. Further back Jordan King and Jimmy Eriksson removed themselves from the race, leaving just ten cars left as Sirotkin pushed Marciello hard all round the final lap before out dragging the Italian across the line as the flag dropped for P2. Behind the top 6 Sean Gelael pushed up to 7th on the final lap ahead of Daniel de Jong, with Ghiotto’s tires clearly spent as he dropped back to P9 ahead of Gustav Malja, the last man on track in 10th position.

Despite his dramas Nato hangs onto the lead of the drivers’ championship on 49 points from Markelov on 48, Marciello on 43, Lynn on 41 and Rowland on 34 points ahead of tomorrow’s sprint race: with the drama on display this morning, it promises to be unmissable.