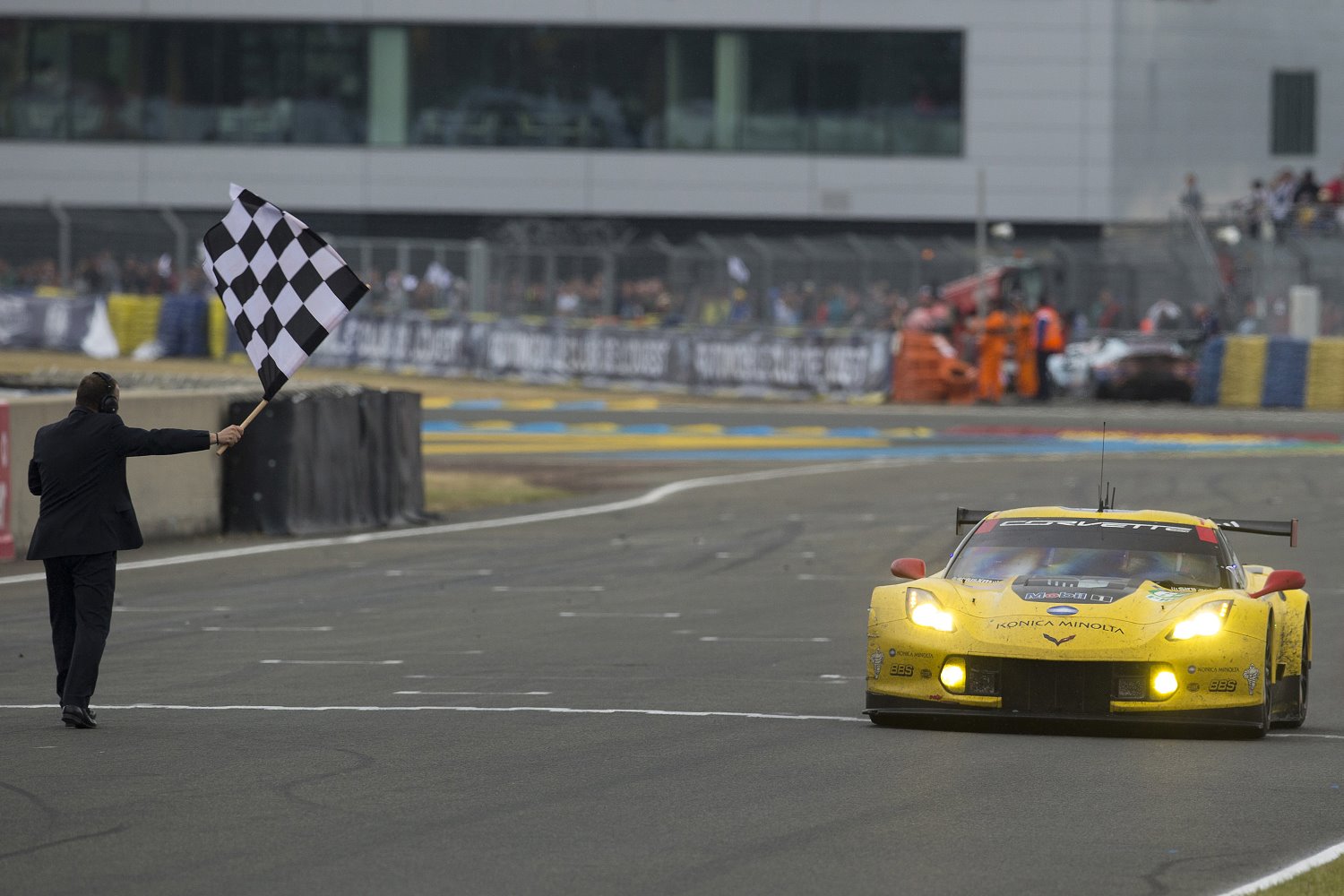 The world’s toughest endurance race beckons once again for Chevrolet and Corvette Racing as the two-car squad aims to write another chapter in its endurance racing history book. The 24 Hours of Le Mans is the marquee event for Corvette Racing each year; the results since 2001 bear out how important the event is to Chevrolet.

Corvette Racing will arrive at Le Mans for the annual Test Day in search of its ninth class victory and a second consecutive triumph. Oliver Gavin, Tommy Milner and Jordan Taylor in the No. 64 Konica Minolta/Mobil 1/Sirius XM Corvette C7.R lead the charge for Corvette Racing as the reigning GTE Pro champions following a storybook race in 2015. Antonio Garcia, Jan Magnussen and Ricky Taylor share the No. 63 Corvette C7.R – the first race together for the trio.

The six drivers have combined for 15 career victories at Le Mans with Gavin winning for the fifth time last year. The No. 64 Corvette was the lone entry in the race following a crash in qualifying for the No. 63 C7.R that forced its withdrawal.

This year’s race will pit Chevrolet against a number of premier automobile manufacturers – many of which also compete in the IMSA WeatherTech SportsCar Championship in North America. Through four races, Chevrolet and Corvette Racing lead the GT Le Mans (GTLM) Manufacturer and Team championship.

Endurance and Corvette Racing go hand-in-hand. No manufacturer can match the record of Chevrolet and its flagship sports car racing team with 27 long-distance victories since 1999. That includes five straight victories in Triple Crown events; in addition to last year’s Le Mans, Corvette Racing has won the last two years in the Rolex 24 At Daytona and Mobil 1 Twelve Hours of Sebring. No sports car team, regardless of class, can boast that level of continuous success in endurance racing’s premier events.

The test program ahead of this year’s 24 Hours of Le Mans has focused on finding the right aerodynamic package for the 2016-spec Corvette C7.R, which meets this year’s Automobile Club de l’Ouest regulations for top-level GT cars that compete in both GTE Pro and the IMSA GTLM class. There are a number of aerodynamic changes from last year’s car including a larger splitter at the front and diffuser at the rear of the Corvette. Side skirts and a repositioned wing also are among the most notable changes, along with updated safety features that are now mandated on all GTE Pro and GTLM cars.

All of those facets along with Michelin tires specific to FIA World Endurance Championship competition have been the focus of Corvette Racing’s on-track testing and engineering preparations. The two Corvette C7.Rs and six drivers performed a final pre-Le Mans test at Road America earlier this month.

Side-by-side, the road-going Corvette Z06 and C7.R race car are virtually identical – a hallmark of Chevrolet’s philosophy of technology transfer. Both cars share a common aluminum frame that provides stiffness (and added safety) while at the same time a weight savings over the previous generation of racing Corvette. Advanced aerodynamics help with air flow, engine and braking cooling, and downforce in the high-speed corners that dot the nearly 8.5-mile Circuit de la Sarthe.

The Corvette C7.R and Corvette Z06 also benefit from the use of direct fuel injection, which helps improve fuel economy to the Chevrolet small-block V8. That often proves critical at Le Mans where longer runs on fuel can mean as much as an extra two laps between stops.

ANTONIO GARCIA, NO. 63 CHEVROLET CORVETTE C7.R: “You need to maximize as much track time as possible on the Test Day. I hope the weather is good but even if it rains you need to try a few things. Laguna Seca the last few years has been where we’ve started running the new Michelin tire for Le Mans. But you don’t really have time to focus on making it work there. So when you get to Le Mans, one of the most important things to concentrate on are tires and then all the new bits and pieces that we have in the Le Mans-spec aero. Year after year, Le Mans has gotten more competitive. Every single tenth of a second there counts, which might seem strange to say considering the length of the track. We have to use all the experience we’ve gained over these first four races in the U.S, and be ready with any improvements as soon possible so we can be as competitive as possible."

JAN MAGNUSSEN, NO. 63 CHEVROLET CORVETTE C7.R: “For us, the Test Day is about getting back in the groove of Le Mans. We come there with a new car and different levels of downforce. We need to learn what the car will do. We won’t pay too much attention to what others will do. When it’s all over we will use that as a gauge to where we are. Our main focus is learning the car and fine-tuning the new aero. When you go there for the test, that’s pretty much what you have. You can adjust a lot of stuff but you’re doing going to redesign anything. You won’t have a chance to know if it will last 24 hours. Obviously after the test we can go back and have a rethink. It’s a lot of time for the engineers to look through the data and try to come up with solutions to whatever problems we’ve had. It is exactly what it is: a test and practice before the main event."

RICKY TAYLOR, NO. 63 CHEVROLET CORVETTE C7.R: “GTE Pro is always super-competitive at Le Mans. This year with four Fords going, just by numbers it will be one of the toughest years ever. Getting that time at Road America and working through lots of things and getting an idea of what the engineers can simulate on the computers over the stretch before the race and understanding certain parameters of the car that apply to Le Mans is important. The team has a solid plan about what we want to do and changes to make. Jordan and I aren’t getting there until the afternoon, so it will be a busy time getting some laps and getting to work through a couple of changes. The team has a solid plan. They’ve done this so many times that while it’s not exactly routine but they can handle themselves well and get a lot of good work done."

OLIVER GAVIN, NO. 64 CHEVROLET CORVETTE C7.R: “The Test Day has always been important, but as things have gotten more finely tuned, and you know what to expect from the car and you know what you should be doing, it becomes quite clear where you are in terms of the car’s performance compared to previous years. You then have to see how that stacks up against competition. I’ve had really good cars at Le Mans and I’ve had some cars that have been quite hard to drive. You always hope that every time you go there, that the package you bring is going to come together and give you a nice, comfortable feeling to give you an attacking style you want to use around Le Mans. If you don’t have that, then you know you’re likely going to be in for a long 24 hours and it makes the job incredibly more difficult to drag a good result out of it."

TOMMY MILNER, NO. 64 CHEVROLET CORVETTE C7.R: “This year especially the Test Day is more important than it has been in years past. We have a new rules package for GTE Pro. It’s the biggest change in our Corvette since we went from C6 to C7 a few years ago. Even then the rules were fundamentally the same. Now we go there with a car that will have quite a bit more downforce potentially. Plus you had on the extra pressure from Ford, Aston Martin has a renewed interest and program… there’s just lots of ‘new’ everywhere. For us, we have something new but it’s not quite as new, which I think will help us."

JORDAN TAYLOR, NO. 64 CHEVROLET CORVETTE C7.R: “Every year when you go to Le Mans, any track time you can get is important – especially with the added car count this year. You really have to be on your game from the word go. Yes we have two long sessions but the lap is four minutes long so by the end of the day you aren’t really going to have that many laps in. You really have to make the most of it. For the drivers, it’s nice to get used to the track again and for the engineers, it’s valuable data they can take to the raceweek."

DOUG FEHAN, CORVETTE RACING PROGRAM MANAGER: “In our 17 years of coming to Le Mans, I’m confident that this will be toughest test we will face at the 24 Hours. The Test Day is more critical now than it ever has been with the number of new cars and new manufacturers. For us, we have spent many hours testing and performing simulations in order to arrive at a package that will give us the best opportunity to win at Le Mans for the ninth time."