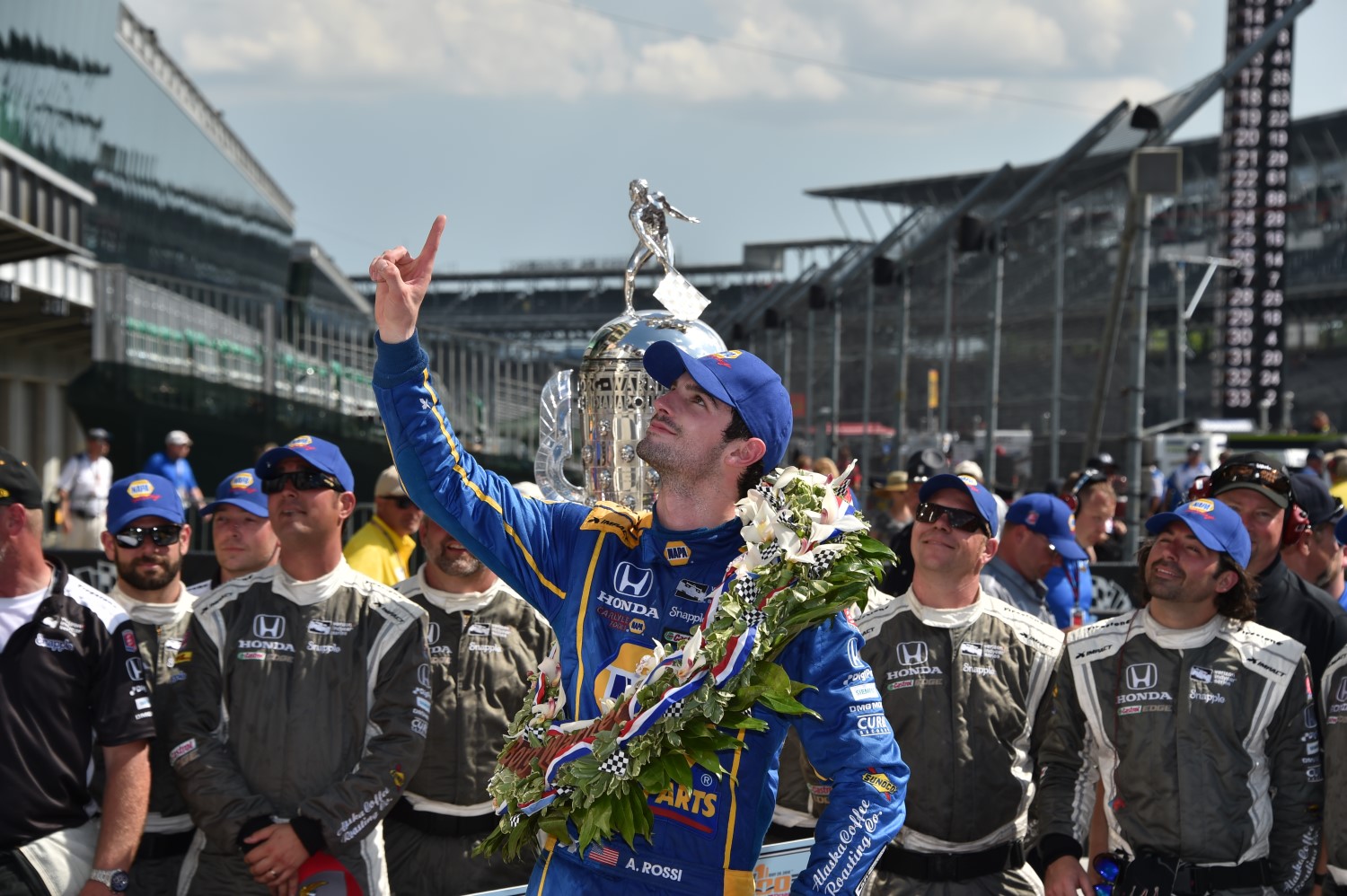 Winning the Indianapolis 500 in any year will change a driver's life. But for a young American rookie to win the 100th edition of the Greatest Spectacle in Racing? That might just change INDYCAR's future, too.

It seems crazy to write, but after a win in one of the biggest races in open wheel history, if Alexander Rossi can find success in the coming weeks to make the name stick, he could become the young new face of the Verizon IndyCar Series.

Yes, some drivers like Josef Newgarden and James Hinchcliffe have been bigger stories over the past couple years. But the stage they succeeded on and the stage Rossi just conquered are two completely different levels.

350,000-plus fans filed into the Indianapolis Motor Speedway for Sunday's Indy 500, the biggest crowd the track's seen in decades. And while the TV statistics for the weekend haven't been revealed yet, it can be inferred that the hype surrounding this race and removal of the local blackout likely led to a decent uptick in ratings and millions of viewers for the annual event.

Rossi's win on this stage, arguably the grandest in all of motorsport, places him in a great position for the series to market moving forward. So, if Rossi may be the next face of IndyCar, just who is this young driver that fans are about to see a lot more of?

First, let's cover the basics. Rossi's a 24-year-old American, born in the humble town of Auburn, Calif. But while he was born in America, Rossi's racing background runs almost entirely through Europe. After progressing through the Skip Barber Racing School in the mid-2000s, Rossi made his way into the American Formula BMW, earning three wins in his rookie year in 2007 and winning the overall championship in 2008.

From there, it was off to Europe. Rossi ran in International Formula Master in 2009, jumped to GP3 in 2010, while also competing in the GP2 Series. This led to another stint in GP2, and, ultimately, Formula 1 in 2014 with a backmarker team.

The only American to hold an FIA Super License, Rossi made his F1 debut in the 2015 Singapore Grand Prix for Manor Marussia F1, finishing 14th after qualifying last on the grid in 20th in a horrible car. Rossi ultimately competed in five of the final seven F1 races of 2015.

Unfortunately for Rossi, his F1 dream was short-lived because he could not raise enough money to buy a good ride. He signed on as a reserve driver for Manor Racing in 2016, but would need to look elsewhere for a chance to drive.

"We followed his career all the way through when I was in Formula 1 and Formula 3 even, all the way through," Andretti said after the Indy 500. "He was our hot, young American prospect to be in (F1). He finally achieved his goal last year, which was awesome. … Unfortunately it didn't work out for him. Maybe in the end, it could work out for you."

"I think it worked out just find at the end of the day," Rossi joked.

Left without a ride for 2016 through Valentine's Day, Rossi finally got a chance in IndyCar just before the start of the season in St. Petersburg.

"In February I wasn't even thinking about IndyCar," said Rossi. "(I was) relatively unknown in American junior formula and they (Andretti and Herta) gave me the shot."

Rossi had a ride – the No. 98 Honda for Andretti Herta Autosport with Curb-Agajanian – meaning he would run the full 2016 IndyCar season, including the 100th Indy 500.

What he didn't have, however, was oval experience. Not a lick. Rossi's first oval race was just two months ago at Phoenix International Raceway. Expectations were low, but Rossi held his own in a 14th-place result.

Meeting expectations was the easiest way to describe Rossi's season up to the Indy 500. The rookie finished inside of the top 20 in every race, but it took until a 10th-place showing in the Angie's List Grand Prix of Indianapolis for Rossi to crack the top 10.

All things considered, there were no expectations for Rossi entering the Month of May, but the rookie quickly turned heads.

Rossi was fast in every practice session during the 500's first week. When qualifying came around, he missed the Fast 9 and a shot at the pole solely due to a desperate last-second run from Mikhail Aleshin that bumped him. Rossi qualified in 11th, the highest of the rookies, and found himself among the best drivers in the paddock as the field roared to life for the annual 500-mile race.

"It's phenomenal," said Rossi. "I'm at a loss for words, but it will change my life, for sure. I don't even know where to begin. … In February I wasn't even thinking about IndyCar, and now we've just won the Indy 500."

From seemingly out of nowhere, Alexander Rossi is an Indy 500 champion. IndyCar has a new young American to market and fans have a new driver to whom to flock .

That is, if he stays.

Rossi's still a reserve driver with Manor Racing. It's no hidden fact that the lure of F1 may still be tempting the newest Indy 500 champ.

"I can certainly say that I'm not in a Grand Prix car anytime soon," said Rossi. "I'm a reserve driver. I sit around and pretend to look important."

While it may not come soon, there is still a possibility that Rossi could jump ship to return to the series he left to join IndyCar. The Californian may not have a deal lined up now, but an Indy 500 win could attract the necessary attention to fuel his return.

Thus is the issue for Rossi. After the biggest win of his career, he may find himself at a crossroads. F1's still out there, promising a chance at worldwide racing and fame. But if Rossi stays in IndyCar, he could become one of the great names in series history.

IndyCar has its man. The name Alexander Rossi will forever be remembered as the winner of the 100th running of the Indianapolis 500. Now it's up to the series to find a way to keep him coming back for the 101st running and beyond. Aaron Bearden/Frontstretch.com