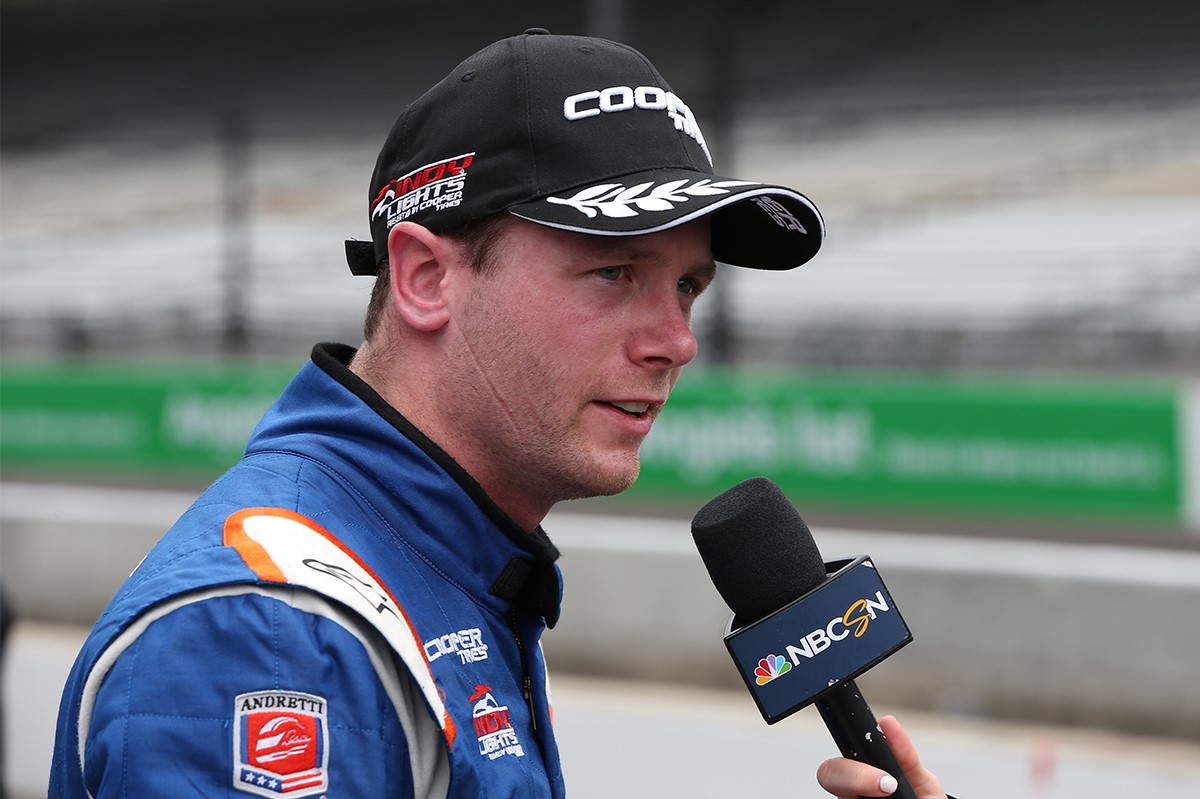 Englishman Dean Stoneman made light of bitterly cold, windy conditions today at the Indianapolis Motor Speedway road course to win another exciting Mazda Grand Prix of Indianapolis Presented by Cooper Tires. The cancer survivor and former FIA Formula 2 champion took the lead soon after an early full-course caution, then held off a variety of challengers to claim a richly deserved victory for Andretti Autosport.

The green flag was delayed a couple of laps after the unseasonably chilly 43-degree weather caught out Schmidt Peterson teammates RC Enerson and Andre Negrao on the parade laps. Enerson recovered from his spin, only to be halted shortly afterward by an electrical gremlin, but Negrao’s race was over even before it had begun following heavy nose-first contact with the retaining wall on the front straightaway.

The run toward Turn One on the first lap of green-flag racing proved predictably eventful, with Serralles making a bold lunge to outside of Carlin teammate and polesitter Ed Jones into the braking zone. The pair turned in virtually side by side, with Serralles perhaps fractionally ahead, only for light contact to send him spearing across the grass on the exit.

Jones narrowly held onto his lead, but only as far as Turn Seven where, despite having wound his brake balance to the rear in response to the cool temperatures, he was unable to slow down enough to make the corner and, momentarily, found himself on the grass too. A little farther behind, Zach Veach inadvertently tipped Belardi Auto Racing teammate Felix Rosenqvist into a spin. Jones resumed in eighth, while Rosenqvist rejoined in 12th.

Stoneman, who had started fifth, took full advantage to nip through into the lead, followed by Urrutia, Scott Anderson (Schmidt Peterson), up from eighth on the grid, a recovering Serralles, then Kaiser and Scott Hargrove (Team Pelfrey).

Stoneman seemed to be in control, edging out a small but appreciable lead within the first few laps, but it wasn’t long before he came under increasing pressure from Urrutia. Serralles soon joined the battle, too, before out-braking Urrutia for second place into Turn One on Lap 14.

On Lap 29, Serralles made a move for the lead at Turn 12, only to slide wide and onto the grass, losing three positions. If Stoneman had any thoughts about cruising to the finish, they were quickly dispelled as Urrutia redoubled his challenge for the lead. But the Englishman was up to the task and took the checkered flag just 0.8659 second ahead of Urrutia, with Kaiser closing to within a similar margin at the finish line. Jones just held off teammate Serralles for fourth, with Rosenqvist, who set fastest lap, also right with the leading group in sixth.

The feature event in the 18-race Indy Lights Presented by Cooper Tires season, the Freedom 100 at the famed 2.5-mile Indianapolis Motor Speedway oval is next on Carb Day, Friday 27, the final day of preparations for the historic Indianapolis 500.

Dean Stoneman (#27 Stellrecht-Andretti Autosport): “It’s been a fantastic weekend here at Indianapolis. It was a very challenging day today; you just had to be smart. It was difficult, starting fifth. I’ve never been the most amazing qualifier but I can put it together in the race. I was happy to get the lead on the first lap but you can’t get too excited because it can all go wrong in a hurry at those speeds. As the race continued and the cars separated a bit, I was hoping the safety car didn’t come out. It was a challenging start to the year but we’re getting there. We’re moving things in the right direction. At the end of the day, consistency wins championships and now that we’ve developed the car well, I’m really looking forward to the Freedom 100."