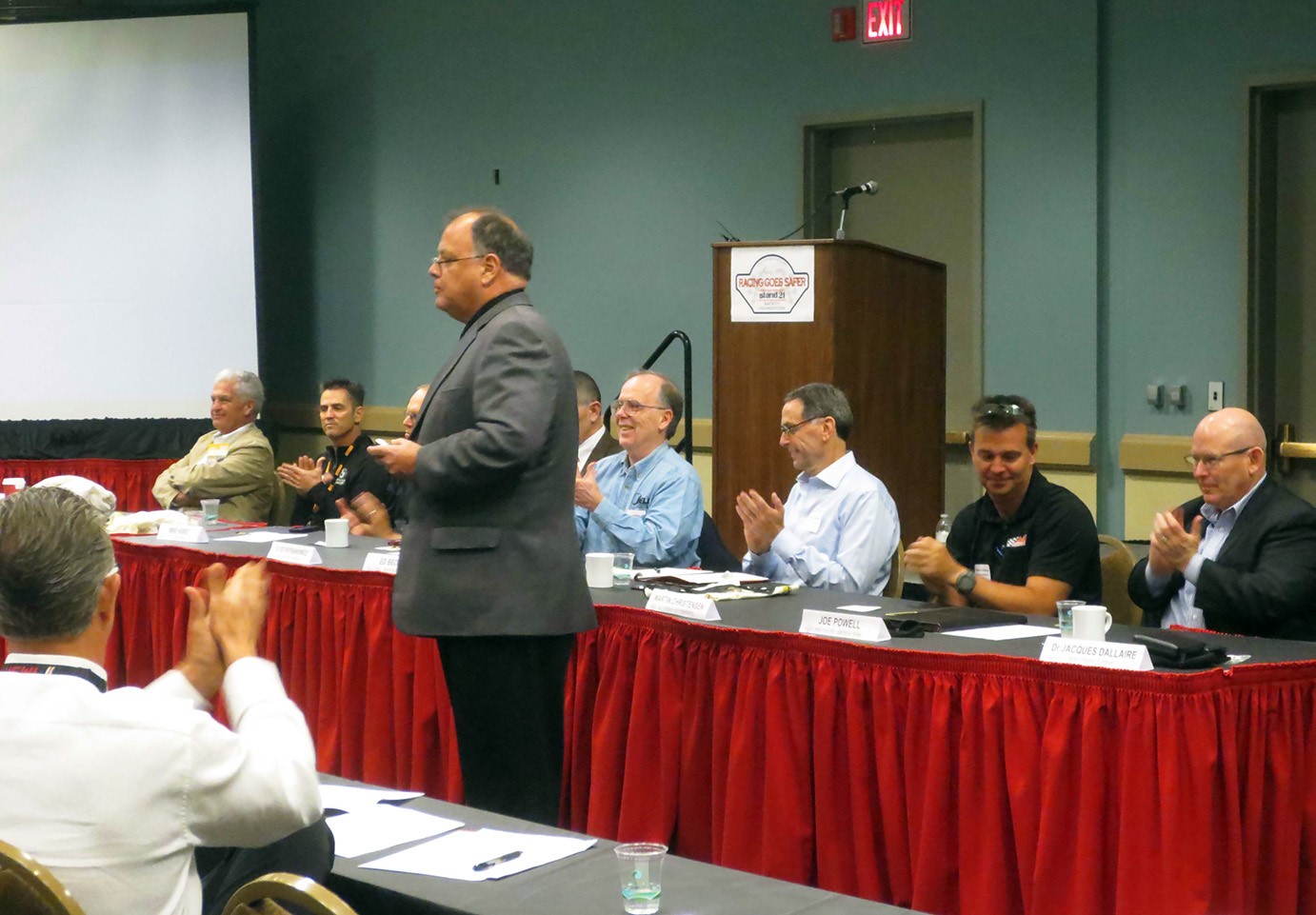 Thanks to the kind support of the Grand Prix Association of Long Beach and its President, Jim Michaelian, 2016 marks the fifth year for the Stand 21 Safety Foundation Seminar at the Long Beach Convention Center, held during the Toyota Grand Prix weekend On April 16th. Stand 21 President Yves Morizot and Vice President Romain Morizot welcomed all who had registered in advance to attend the Seminar.

Foundation Director Don Taylor served as Emcee, engaging these three famous racers for over an hour, inviting them to tell their colorful stories, to the intense interest of the 80 registered attendees. Redman’s illustrated description of his 1967 enormous crashes at Spa-Francorchamps and at the Targa Florio, there followed by a life-threatening fire, were scary reminders of how important it is to surround oneself with adequate protection, an option that simply did not exist at the time.

While Sullivan escaped major injuries during most of his career, he recommended to all to seek the finest and most effective personal protective equipment money can buy, and thanked “Racing Goes Safer" founder and Stand 21 President Yves Morizot for having kindly helped him with a loan when in need in his younger racing days.

Del Worsham described how difficult it is to keep a low-flying missile such as a Top-Fuel, 10,000 HP monster going in a straight line up to 300+ MPH, in under 4 seconds, and how a simple brush with the outer wall easily turns into a major accident, as well as the enormous risks of fire to which the top-level drag racers are subjected.

Dr.Terry Trammell, MD, Safety Consultant at IndyCar, explained to the audience the importance of wearing flame retardant, technologically advanced underwear made of breathable fabric, as an integral part of fire protection, as well as reducing heat stress. The latter, hampering the body's well-being and leading to poor decision making, is often caused by wearing cotton/nylon undergarments under a racing suit, restricting perspiration evaporation. There is a special danger for women drivers if they are wearing nylon brassieres with steel support rings, as nylon will melt over skin and the metal rings can quickly conduct heat, causing severe burns. Most racers need to seriously consider the facts; adequate underwear can increase “safe" time in a fire by as much as 40%.

Dr. Stephen Olvey, MD, Associate Professor of Neurology, University Miami School of Medicine, not a stranger to repairing the mangled bodies of badly injured Indy cars drivers, made an important presentation of the recent discoveries regarding the relation between concussions and loss of memory, leading to dementia and eventually Alzheimer’s disease. This is caused by a protein growing in the brain, forming plaques hampering its proper function. Concussions are a major factor in sports injuries, and while auto racing is somewhat less affected than sports where physical impact is part of the game (football, boxing…), it remains that many racing crashes result in concussion for the drivers. As a result of this realization, post-incident testing of drivers for concussion is becoming more common place in the sport. Dr. Olvey also pointed out that concussions may not only be suffered from head contact with the roll-cage, etc., but also by violent impacts in which the head does not touch anything.

Ed Becker, Executive Director of the Snell Foundation, demonstrated the differences that racers should know in certification procedures and levels of protection between the Snell SA, M and FIA 8860 standards. Mr. Becker showed how previously impacted helmets may look fine from the outside, but their inner liner, often made of expanded polystyrene or other material not offering “memory", can be damaged, making the helmet now truly unsafe to wear.

Mike Hurst, SFI Technical Director, once again warned of the more than ever serious problem of counterfeit, and often dangerous safety items, mostly manufactured in Asian countries and sometimes bearing false manufacturing and certification labels. If the prices are unusually low, racers should beware and inquire about the authenticity of the products and instead, shop from a trusted source. Counterfeit products also present a serious liability concern for track owners and organizers, as accidents involving injury or death and obviously caused by failed counterfeit products, could endanger their livelihood in case of litigation by survivors.

Dr. Jacques Dallaire, President of Performance Prime and Doctor in Exercise Physiology, demonstrated the need to focus to succeed, a state of mind vital to win in motorsports. In his talk titled "Distracted Driving", he demonstrated how absolute concentration on a single task will always be superior to multi tasking, which may lead to loss of concentration and failure.

Joe Powell, a racer as well as part of on-track medical response crew, provided a dynamic presentation on-track readiness, keeping his audience on its toes, showing the often ignored shortcomings of typical club racing with inadequate fire or medical backup, and sometimes the unwillingness of organizers to cooperate, to provide that protection to the racers. Racers should always inquire about what emergency personnel and equipment are available and where they are located on the racing track, before driving a single lap. Quoting "Nitro" Joe Powell: "The best offense is a good defense! Things to think about before you get into the car on race day:
– Don't eat a big meal right before the race. (For the same reasons you are told not to eat before surgery, this lessens the risk of asphyxiation due to a blocked airway.)
– Be aware of your medications, blood thinners, etc. Blood thinners will make it more difficult to stop bleeding in the event of an injury.
– The better overall shape you are in, the better your chances of surviving a bad crash. Fitness is key. – Make sure that you and your team have a copy of your written meds, allergies, insurance, and emergency contacts! (This applies to crew members as well. They should also have their information accessible).

At the Seminar's conclusion, Don Taylor had the audience fill feedback sheets, and the analyzed results are clear: the majority of attendees learne new, vital information, and most have indicated that this new knowledge will change certain aspects of their racing preparation and behavior.

For all involved in the “Racing Goes Safer" Foundation, it means that this Seminar was a success!

Feedback from our audience was positive, with this response as an example:

"I just wanted to say that I learned so much about personal safety in racing… The technical information, such as the proof of fire retardant underwear giving double the time of getting out of a fire without 2nd degree burns was information that you wouldn't get at many places or magazines. The entire professional-grade information on head concussion, and the protection that the Hans Devices gives a driver could be truly life-saving information to anyone who attended the seminar, and again, would be hard-to-obtain information anywhere else."