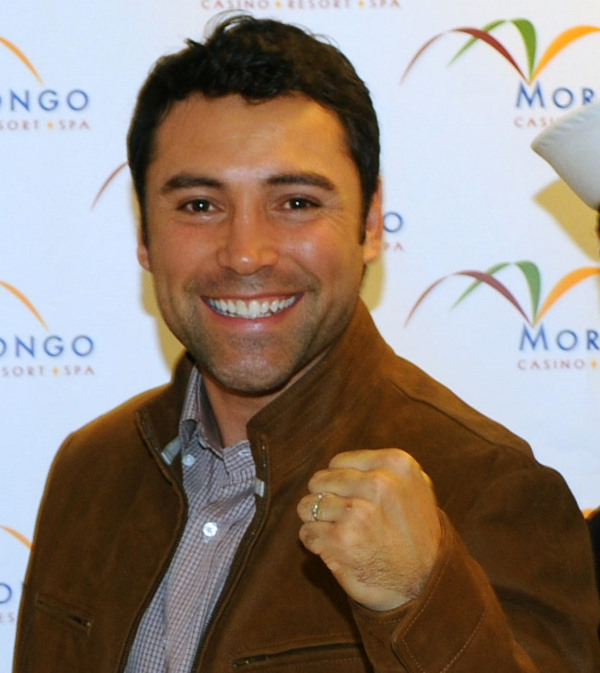 De La Hoya will be joined by Taya Kyle, wife of Navy SEAL and "American Sniper" Chris Kyle, who will wave the green flag for the Verizon IndyCar Series race on Sunday as the Honorary Starter.

In addition, during the pre-race activities, Sgt. Marcus Dangelo of the California Army National Guard 40th Infantry Division Band will sing the national anthem and fans will be treated to a flyover of a Boeing C-17 military transport airplane by the U.S. Air Force out of March Air Reserve Base in Moreno Valley.

De La Hoya, known around the world not only as one of the best fighters of his era but as an elite event promoter, is also a Grammy-nominated singer, astute businessman and active philanthropist. He has been recognized by lawmakers in Washington, D.C., California and Los Angeles for his many contributions to the Mexican American community.

Over the course of his boxing career, De La Hoya was an Olympic gold medalist, 10-time world champion in six divisions and among the biggest draws in the history of the sport. Since retiring from the ring in 2009, he has built the company he founded, Golden Boy Promotions, with a focus on building the sport’s next generation of talented superstars including Canelo Alvarez, Jorge Linares, Lucas Matthysse, Randy Caballero, and David Lemieux.

Elected to the International Boxing Hall of Fame in 2014, De La Hoya has received many accolades from the media for his continued contributions to the sport of boxing and was named “Promoter of the Year" two years in a row by Sports Illustrated in 2014 and 2015.

Taya Kyle is the author of the New York Times bestselling book, American Wife. She is a bold advocate for women and families and a passionate voice for faith, strength and American ideals.

Following the tragic death of her husband Chris Kyle – author of the New York Times bestselling book and Academy Award-winning motion picture, American Sniper – Taya now serves as Executive Director of the Chris Kyle Frog Foundation. The Foundation continues Chris Kyle’s legacy while serving the needs of military and first responder families. Among her achievements, Kyle has been presented with the Ronald Reagan Award at the National Republican Congressional Committee March Dinner in 2015 and was the first woman to be presented the Stonewall Jackson Award on Memorial Day by Charlotte Motor Speedway.

Ticket prices for Sunday, April 17 at the Toyota Grand Prix of Long Beach range from $60 for a Sunday General Admission ticket, which grants access to all the day’s race events, to $87 for a Sunday reserved-seat ticket in grandstand upper levels. There are three-day ticket packages available, as well as pre-paid parking, handicapped seating, Verizon IndyCar Series Paddock access passes, Super Photo tickets and a wide variety of Hospitality Club packages.

Fans can select and pay for their 2016 Toyota Grand Prix of Long Beach seats, parking and paddock passes online at gplb.com. Ticket orders can also be placed by calling the toll-free ticket hotline, (888) 827-7333. A printed ticket brochure that includes a circuit map, ticket prices, order form and other information can be obtained by calling the hotline.