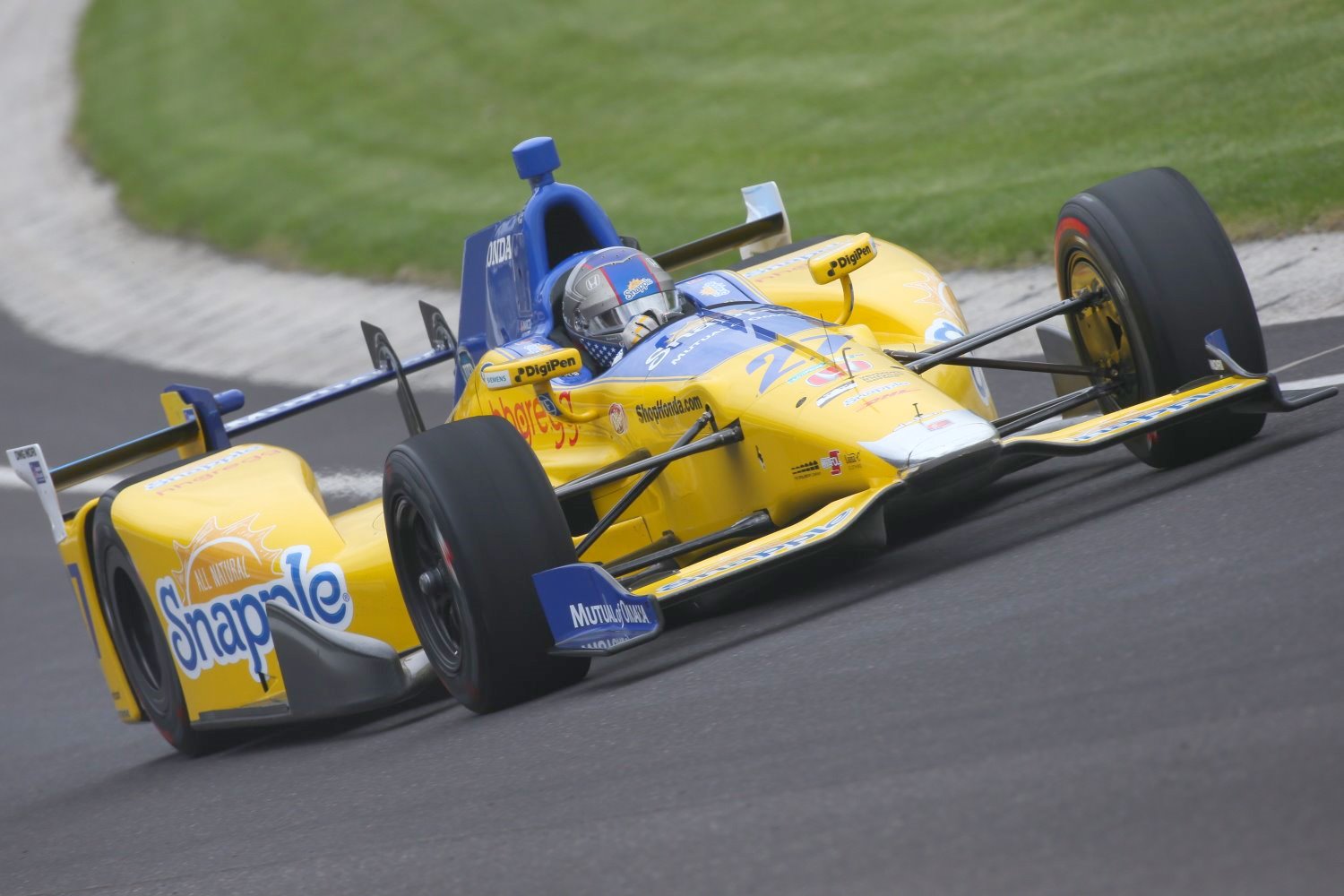 The Verizon IndyCar Series today held a test at Indianapolis Motor Speedway to assess the various configurations of the Chevrolet and Honda superspeedway aerodynamic bodywork kits.

With more than 500 laps turned on the 2.5-mile oval by 15 drivers while dodging intermittent rain on a blustery day, reams of valuable data were gathered in preparation for the 100th Running of the Indianapolis 500 presented by PennGrade Motor Oil next month. Marco Andretti, in the No. 27 Andretti Autosport Honda, posted the fastest lap of the day at 223.427 mph.

"We ran through quite a bit of different combinations as part of the aero kit configuration test," said Bill Pappas, INDYCAR vice president of competition, race engineering. "The conditions weren't ideal, but we did get a lot of information to go over and look through over the next couple of days to get ready for the month of May."

All the cars testing were fitted with domed skid plates for the undercarriage of the Dallara IR-12 chassis, a safety initiative mandated on superspeedways this year by INDYCAR. The domed skid plates add approximately six times the amount of downforce (as compared to the 2015 configuration) when a car spins, which slows the car prior to any potential contact. The domed skids also raise the speed at which a car would have to be traveling to become airborne.

"On the safety standpoint of the domed skid, it's a big improvement, especially in the 90-degree yaw," said reigning Verizon IndyCar Series champion Scott Dixon, who ran just 30 laps in the morning session in the No. 9 Target Chip Ganassi Racing Chevrolet. "We've got to look at safety before anything. Yes, it's going to make the car maybe a little more difficult (to drive), but every car has a pedal and we have more downforce to put on to compensate for the loss."

Andretti's overall fast lap was set in the morning session. His Andretti Autosport teammate, Ryan Hunter-Reay, in the No. 28 Honda, was fastest in the afternoon and second quick for the day at 222.047 mph. Simon Pagenaud, in the No. 22 Team Penske Chevrolet, was third fastest at 221.293 mph.

Chevrolet conducted a private test at IMS for its teams on April 5, so the Ganassi and Penske teams opted not to run in today's windy afternoon session halted several times for light rain. Honda teams used as much track time as they could.

"It's going to be interesting with these skids, for sure," said Graham Rahal, who turned 48 laps in the No. 15 Rahal Letterman Lanigan Racing Honda with a best lap of 218.619 mph. "It's going to take some work to get them to where we need them to be to be raceable."

Schmidt Peterson Motorsports driver James Hinchcliffe applauded the efforts of the two manufacturers and INDYCAR working together at the test to develop a car that checks all the boxes when Indianapolis 500 practice begins May 16.

"The good news is we all seem to be working toward the same thing," Hinchcliffe, driver of the No. 5 Honda, said. "We are all genuinely trying to make a safer car but a car that still races well. I think there is a way to appease both sides of that argument.

"Hopefully by the time we show up here for practice week, we've found that compromise and everybody can be relatively happy."

The test also provided Hinchcliffe his first opportunity to run a lap at speed on the track where he was seriously injured in a crash during Indianapolis 500 practice last year. He missed the remainder of the 2015 Verizon IndyCar Series season recovering, and couldn't wait to put the mishap completely in his rear view mirror.

"Everyone was going to be thinking about it until we got out here and ran some laps," Hinchcliffe said. "It's always nice to be back at the Speedway; we all say that all the time and it's extra nice to be able to go around at pace today.

"Sitting out last year was tough," Hinchcliffe admitted. "Getting to watch all my friends and colleagues go do the greatest race on earth and have to be watching from the sidelines is a big blow, for sure. This is our Super Bowl, this is what we really put as much attention on as anything else. Of all the ones to miss, it's the hardest.

"To get the opportunity now to come back, it definitely feels a little more rewarding."