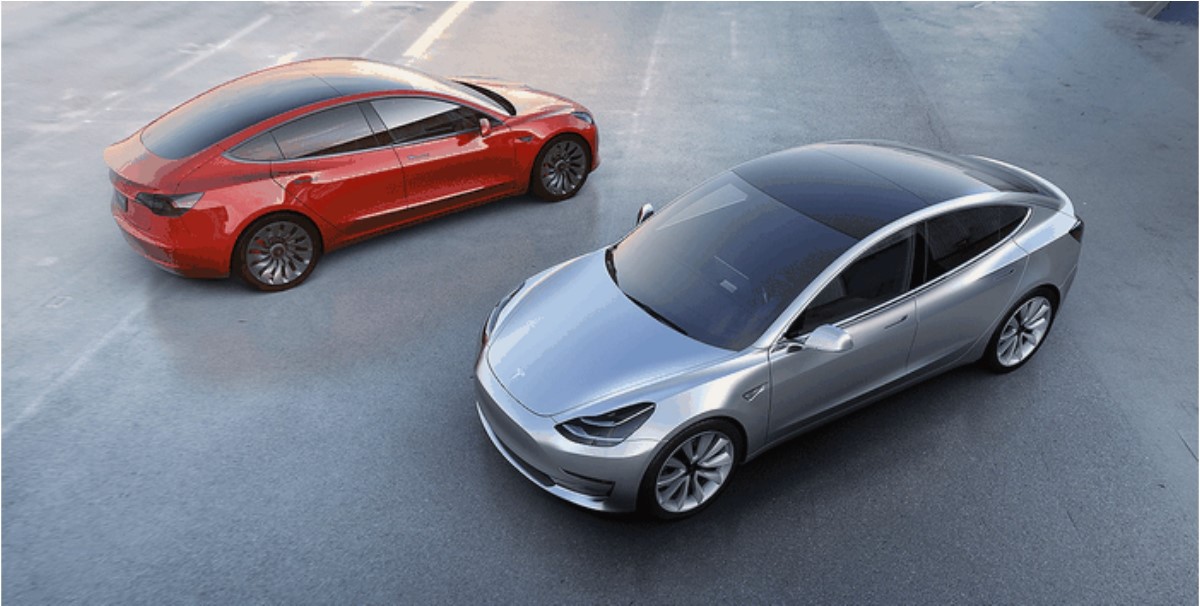 Suggesting there may be significant pent-up demand for an affordable electric car with decent range, Tesla Motors revealed the design of its $35,000-and-up Model 3 during a invitation-only event late Thursday.

The unveiling took place after a day of anticipation during which thousands of people waited in line at Tesla showrooms to place $1,000 deposits on the car, sight unseen.

More than 115,000 people made reservations for the Model 3 within the past 24 hours, Tesla CEO Elon Musk said at Tesla’s design studio in Hawthorne, Calif., as he revealed the Model 3, with an aerodynamic, genre-bending design somewhere between sedan and hatchback and a huge, tablet-like screen between the front seats.

Musk said the Model 3 will seat five adults in comfort and will have a minimum range of 215 miles and a 0-to-60 time under 6 seconds in its cheapest iteration when it goes on sale at the end of 2017.

“I do feel fairly confident it will be next year," Musk said to knowing laughter, given Tesla’s track record of delays on its current products, the Model S sedan and Model X crossover. “As for price, it’ll be $35,000. And I want to emphasize that even if you buy it at $35,000 — no options at all — this will still be an amazing car."

Despite the dearth of details, the surge of reservations for the Model 3, intended to become Tesla’s first mass-market model since its founding in 2003, marks a pivotal moment for the company and for electric cars.

Despite the months of intense hype for the Model 3’s unveiling, Tesla disclosed precious few details on pricing or content, saying it would share more information to launch. Musk did say the Model 3 would come standard with hardware for Tesla’s Autopilot system and the ability to use Tesla’s network of proprietary Superchargers.

He also signaled that Tesla would offer “much faster" versions of the Model 3.

Despite the dearth of details, the surge of reservations for the Model 3, intended to become Tesla’s first mass-market model since its founding in 2003, marks a pivotal moment for the company and for electric cars.

Palo Alto, Calif.-based Tesla sees sales volume from the Model 3 as key to its long-term success. From the moment it goes on sale, the Model 3 will face stiff competition from conventional automakers, including General Motors’ Chevrolet Bolt, which is now in the early stages of pre-production and is scheduled to go on sale by the end of the year with a range of roughly 200 miles on a full charge.

Orders for the Model 3 started Thursday morning, as Tesla gave U.S. customers the chance to submit a $1,000 refundable deposit at a Tesla store to begin the waiting period. Owners of the Model S sedan or Model X SUV were given one priority reservation per vehicle they owned, putting them ahead of first-time buyers in the delivery queue. Tesla also gave priority reservations to its employees and those of SpaceX.

Lines formed at many of Tesla’s factory-owned showrooms, with some of the lines snaking around the block, according to postings on social media. At one point during the day, a broadly grinning Musk visited Tesla’s showroom at a shopping mall in Century City, Calif., giving high fives to every customer waiting in line, a video posted online shows. (He declined requests for photographs, saying he was pressed for time.)

Tesla plans to start assembling the Model 3 in late 2017 at the Fremont, Calif., factory where it builds the Model S and Model X. Deliveries would begin in California and move eastward across the United States, then to Europe and to right-hand drive markets.

Many people, including some of Tesla’s staunchest fans, remain skeptical that the company will hit its deadline, as Tesla has never set a production deadline it didn’t miss. So far, this has not been a problem, as Tesla’s base of fiercely loyal customers have been willing to wait and have forgiven early quality glitches. Mass-market customers may not be so forgiving, said Patrick Min, a senior analyst at TrueCar.

“This is a pretty big test for them in terms of … pushing the vehicle out at this level," Min said.

By moving down-market, Tesla opens itself up to car-buyers who previously were priced out of the company’s showrooms. But despite the headline-grabbing entry price of $35,000, analysts do not expect many customers to pay so little for a Model 3.

“Virtually no one will buy that specific car," David Whiston, an auto analyst at Morningstar, told Automotive News before Thursday's unveiling. He predicted that an eager base of early adopters will push the Model 3’s average transaction price into the $40,000s or beyond. “This is not really the mass market car that some people are referring to it as."

Whiston said Tesla may need an even cheaper car than the Model 3 to reach its stated production goal of 500,000 vehicles annually by 2020, nearly 10 times the 50,580 it delivered in 2015. Tesla, which has never turned a yearly profit and reported $320 million in net losses for the fourth quarter of 2015, has also said that it needs the volume of the Model 3 to be viable in the long term.

“If you really want to start getting into the volume segments, you’re going to need cheaper cars than what they sell today — and even cheaper than the Model 3," Whiston said. “That’s the big question for this company: can they ever get the scale to survive?"

Tesla has said the $35,000 price is before federal and state tax credits. Once on sale, the Model 3 may push Tesla past a threshold for federal tax incentives, which have helped to spur sales of electric cars such as the Model S. Once an automaker sells more than 200,000 electric vehicles in the United States, that company’s vehicles soon become ineligible for the credit, which is worth up to $7,500.

Tesla, which does not break out sales by country, has not disclosed how close it is to the 200,000 mark, but the automaker is expected to pass the threshold as soon as 2018, meaning that the customers who place a deposit on the Model 3 have no guarantee that credits will be available when deliveries begin.

Many people remain skeptical that Tesla will hits its goal of delivering the car in late 2017, given that the Model X went on sale in late 2015, two years later than Tesla initially promised.

Musk has admitted that at least some of the delays on that vehicle were tied to overly ambitious design elements such as upward-opening falcon-wing doors and sliding second-row seats.

Few of those gee-whiz elements are apparent in the Model 3’s design, aside from a panoramic glass roof and the decision to move the front seats unusually far forward for more space.

Like the Model S and Model X predecessors, the Model 3 has a slippery design to cheat the wind. Built from scratch on a new platform, it will provide the underpinnings for additional models including a small crossover. Autonews