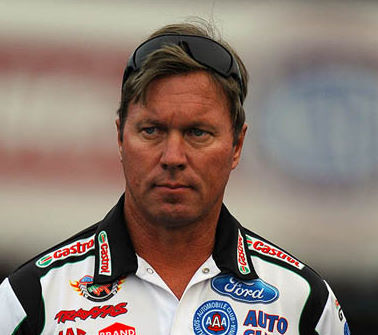 Mike Neff, a two-time National Hot Rod Association (NHRA) Funny Car championship crew chief and race-winning Funny Car driver, has been paired with John Force Racing Funny Car driver Robert Hight since midway through the 2013 season. The Auto Club Chevrolet Camaro SS team is off to a fast start this season, with a victory at the Gatornationals two weeks ago and two other semifinal appearances. Hight, who is 8-2 in eliminations, is the Funny Car points leader entering the DENSO Spark Plugs NHRA Nationals this weekend at The Strip at Las Vegas Motor Speedway.

Neff shares insights on the season so far:

Q: A successful season starts with a solid foundation. What did the off-season program focus on to contribute to such a strong start to the 2016 Funny Car season?

MIKE NEFF: The off-season was more detail-oriented and refining what we had. We finished last season fairly strong; Robert’s car was running good. He won Vegas, the second to the last race, and won Brainerd, so coming down to the end of the year we were definitely getting better and felt like we were really close to what we wanted. Over the winter we filled in a couple of gaps and polished what we had, and came out this year and it’s just clicked. We hit on a few things in testing, which put us right in the middle of it. At the beginning of last year, we had to take a step back because we changed our whole clutch program around by adding another disc (from five to six discs), and that is a big learning curve. When you do that, you pretty much shelve your history of what you’ve done and go down a new road and sort it out. That was part of the reason why we didn’t perform as well as we usually do. At the end of the year it all started to come together, and we just looked at refinements in the off-season. It’s continued early this year in that we’re looking the best we have in a long time.

Q: Part of that foundation is Chevrolet power. Now in its second season, it appears the engine program and Funny Car team are "hitting on all cylinders." How is the Chevy NHRA program involved in supporting John Force Racing?

MIKE NEFF: Chevy has been a big part of our involvement with the new aerodynamic body that we’ve been working on since the latter part of last year and hope to hit the track with in probably two months. Plus, Chevy has been a huge help during testing with providing data, sensors, devices that we put on the car during testing. It was key to have a Chevy engineer at the test sessions do all the things that we don’t know how to do to learn more of what’s going on and how we could potentially improve. They’ve also been really helpful with the research and development aspects, and we feel as if we’re just getting going with their resources. I’m excited about Chevy’s involvement, and the thing that really excites me is it seems they’re excited about it, too.

Q: How would you characterize your work relationship with Robert? Both of you have driven in the Funny Car class and Robert started in the business as a crew member with John Force Racing, so is there a free flow of feedback and information?

MIKE NEFF: That’s one thing that helps our relationship as far as working together. He understands a lot about the car, the parts and how it all works as well as I do. He understands the driving part, and I’ve also driven. That’s probably the biggest thing that has happened to me as a crew chief is getting the opportunity to drive, to experience what it’s like, because it’s so hard to wrap your brain around what it would be like being in that car and the sensation of speed and what goes on. Unless you’ve done it you can’t relate. The feedback from him, too – ‘it did this’ – I can relate to because I probably experienced the same thing in the car. We have a really good working relationship, which shows in the performance on the track.

Q: In the Gatornationals semifinal against Chad Head, when last-minute changes to the Auto Club Chevrolet Camaro SS were made, Robert noted as an example of you being totally calm in a stormy sea. What do you attribute the confidence to charge into such decisions — your experience, your driving days?

MIKE NEFF: I try to stay calm because getting rattled just gets everyone else rattled and it snowballs from there. I try not to second-guess myself. Otherwise, you could do that all day long. I try to make my decision and go with it right or wrong. Most of the time you’re right and experience plays a role in it. The elements we’re fighting constantly are the track conditions. It could be cloudy and the sun could pop out and within five minutes warm the track enough that would require a change in the clutch for us. The atmospheric conditions play a part, too, in that if the sun comes out when it had been cloudy might require us to change the speed of the supercharger to keep up with the formula for our engine tune-up. That’s something we do in the staging area as well. During the Gatornationals eliminations, the sun was in and out, which makes you a little more undecided. But in those situations I just try to go with my gut. Sometimes it all looks good on paper, but you trust your instincts to make a change and usually it works out OK. There’s a lot that goes on behind the scenes that people don’t see how fine-tuned these cars really are. Three grams added to the clutch can make the difference whether you smoke the tires or not. That’s how touchy these cars are, and you have to make the right call.

Q: Do you expect anything less than the Auto Club Chevrolet Camaro SS team to challenge for the Mello Yello NHRA Drag Racing Series championship, and who will be the stiffest contenders?

MIKE NEFF: We expect to be there at the end to contend for the title. Our teammates (John Force and Courtney Force) will be some of our biggest challengers because everything (the set-up) is pretty much the same across the three cars. It seems like a race or two one car will run a little bit better; they seem to take their turns. They’re all very close. Also, the Schumacher cars are certainly very tough, and Del Worsham got hot at the end of last year. Cruz Pedregon can step up at any time. You really can’t take anybody lightly. What you’re seeing is the competition has never been so tight. You really have to have it together.