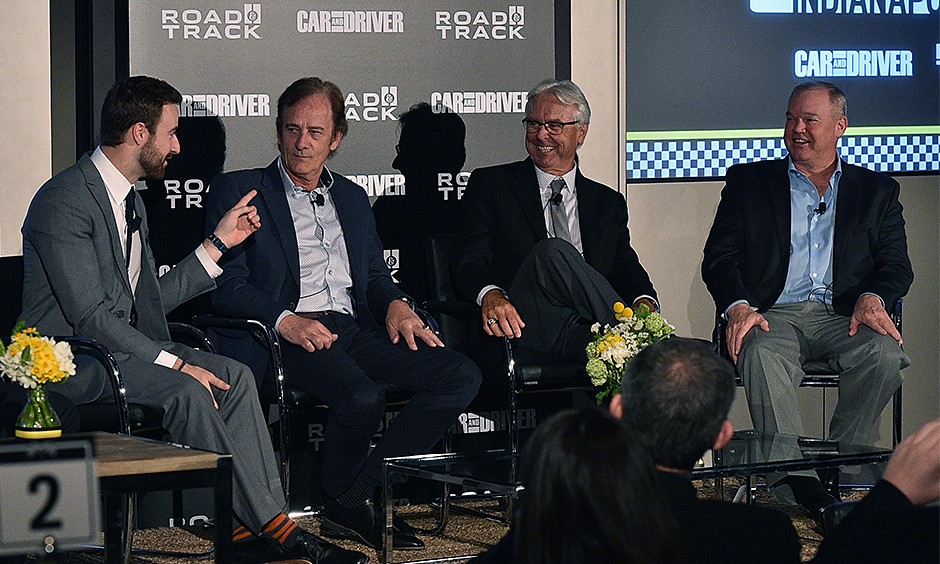 It was fitting that four Indy car drivers – three retired with multiple Indianapolis 500 wins each and one current Verizon IndyCar Series driver – would meet for a forum to discuss everything racing in New York City. For this rollicking and informative discussion was made for the Broadway stage.

“A Celebration of the 100th Running of the Indianapolis 500," held at the Hearst Tower in Manhattan, was sponsored by Car and Driver and Road & Track magazines and streamed live on IndyCar.com, in conjunction with the New York International Auto Show. It featured four-time Indy 500 winner Rick Mears, two-time 500 winners Al Unser Jr. and Arie Luyendyk, and someone who hopes to earn his first “500" win this May, James Hinchcliffe.

There was a plethora of quips and serious stories shared by all four drivers on stage, on a range of topics. Read on for some highlights or watch the entire forum below.

On how racing has changed

“The biggest change is safety," Mears said. “Cars are as safe as they’ve ever been in the history of the sport, period. That’s one of the biggest gains we’ve ever had. The other is how we get to that balance and how we measure things, and that’s the electronics.

“(When he started Indy car racing) we measured (only) steering, throttle and speed. They had just started making laptops. I didn’t even know how to turn one on. After practice, guys would load (data) on a floppy (disc), put a Post-It note that would say, ‘Stick this in the side, push this button, turn this on’ and I’d take one back to the hotel, pull up the graphs and look at them."

To that, Hinchcliffe added, “It’s funny to hear you guys talk about the (tachometer), water temperature and oil pressure. Now I can tell you what my brake bias is, what my roll bar positions are. The technology has developed in such a way from three channels of data to about 130 channels of data. My data reading experience is much different than what Rick’s was. … Floppy disks don’t exist anymore. Eight-track (players) are on their way out, too."

Unser then jumped in. “Really? I’m going to have to catch up on that."

There’s nothing faster than an Indy car

Luyendyk, who assumes a new role this season as a steward in the Verizon IndyCar Series, said racing on the various tracks is unlike any other series in the world.

“If you think about pure speed, and that’s what grabs you, an Indy car goes faster in a corner than a Formula One car goes anywhere on any track in the world on a straight line," he said. “(Drivers from other countries, particularly from F1) would show up here and really be taken aback by the pure speed, and that’s running by themselves before having to deal with turbulence and traffic. There’s so many moving parts and there’s so much that you have to pay attention to, especially in traffic."

Racing has become much closer now

Added Mears, “Today, no matter what you did with the rules, you wouldn’t get the runaways that we used to have. We’re all playing with the same chassis and stacking the same blocks, it’s just a matter of how you stack them. Pretty soon, everybody figures out how to stack them the same way and closes things back up."

To which Mears retorted, “Well, you didn’t have to say it outright."

Reflecting on ‘back in the day’

Whenever you get drivers from past eras together, they invariably talk about what things were like in their time.

“When we raced, there was no pit speed limit," Luyendyk said. “If you were at the end of pit lane, you could afford to come into the lane at 200-plus (mph) and then you were happy you came to a standstill in your pit box."

Hinchcliffe, eyes wide and jaw agape, couldn’t believe what he was hearing. “For the record, that’s terrifying, what you just said," he said. “I did not know that."

“That’s a great point," Hinchcliffe chimed in. “If your outside right front (tire changer) is telling you to go, go, go when somebody’s coming in at 200 down pit lane, I would fire my right front."

Luyendyk deadpanned about some of the more serious crashes he, Mears and Unser had in their careers, prompting Hinchcliffe to add, “Basically what they’re saying is that it’s amazing any of them are still standing, so congratulations on that."

Luyendyk, a native of the Netherlands, joked he had a secret weapon to protect his feet.

“I never broke anything because, you know, Dutch wooden shoes," he said. “Driving with wooden shoes was good protection."

While much of the discussion was filled with jokes, the crowd grew silent listening to Mears and Hinchcliffe recall the worst crashes of their respective careers.

Mears almost lost both feet at Sanair in Canada in 1984.

“They were originally going to take both feet off, and fortunately (team owner Roger) Penske and Dr. (Stephen) Olvey were standing there and said they were going to do something else," Mears said. “They took me back to Indianapolis and Dr. Terry Trammell kind of pieced them back together.

“But when I saw my feet were still there, I knew I was going to drive again. I just didn’t know when. That was the only question in my mind because it’s what I loved doing. If it wasn’t what I loved doing, I’d look down and say ‘Well, I’m done’ whether they were there or not. But if you really love what you’re doing, the risk outweighs the reward and that’s what it’s all about."

“I woke up in ICU, was on a ventilator, had to ‘talk’ with pen and paper and my third question was when could I get back into the car," Hinchcliffe said. “The doctors looked at me completely dumbfounded. ‘This car just did this to you and you want to get back into one?’ It was nobody’s fault, it was just a (mechanical) failure and that happens in anything. That made it a lot easier for me to take.

“I knew I did nothing wrong," the Schmidt Peterson Motorsports driver added, “so as soon as I was healthy enough and the doctors said I could do it, I was going to do it again. As much as my mother wanted me to switch to accounting, it just wasn’t going to happen."

Hinchcliffe had one of the best lines of the night when the panel started discussing the 100th Running of the Indianapolis 500 in May.

“It’s super cool that we’re sitting up here and between the four of us, there’s eight Indy 500 wins. We’ve got two (pointing to Luyendyk), four (Mears), two (Unser) and I’m here (with zero), so it’s super cool to be a part of such an esteemed panel."

Luyendyk then asked Mears, who replied almost in embarrassment with one word that caused the crowd to roar with laughter: “Two."

Unser recalled how he lost the 1989 Indianapolis 500 when he bumped wheels with Emerson Fittipaldi on the 199th lap in the short chute between Turns 3 and 4. Unser went into the wall and Fittipaldi went on to victory lane.

“I gave him the salute," Unser said with a smile. “At that time, I had gotten out of the car, the track was under yellow, so he’s on his last lap. Everybody slowed down, I got out of the car and started walking out onto the track.

“So, he stepped aside and said, ‘Go right ahead.’"

Unser then had what he called “a moment of clarity" and proceeded to congratulate Fittipaldi with a double thumbs-up salute as Emmo drove past.

Looking forward to the 100th Running

All four drivers remarked about how much they’re looking forward to the epic 100th Running of the Indianapolis 500 presented by PennGrade Motor Oil in May.

“The quality of the product is just fantastic," Luyendyk said. “The last couple of Indy 500s have just been so exciting to watch. It’s hard to imagine this race will be held for the 100th time. There’s always drama at Indy and I’m sure it won’t be any different this year."

Added Unser: “It’s the greatest race in the world, and for us to be alive and be present at this time of the 100th running … I think that’s a true blessing to witness the fastest automobiles in the world and the best drivers and teams competing. I feel truly lucky."

From Mears: “I’m really going to celebrate this one because I’m pretty sure I won’t be around for the 200th one."

And Hinchcliffe: “I get to participate in the 100th," he said, glancing to the Borg-Warner Trophy standing tall nearby. “It’s sitting right there. This is the reason we do it, this beautiful trophy. I can’t wait."