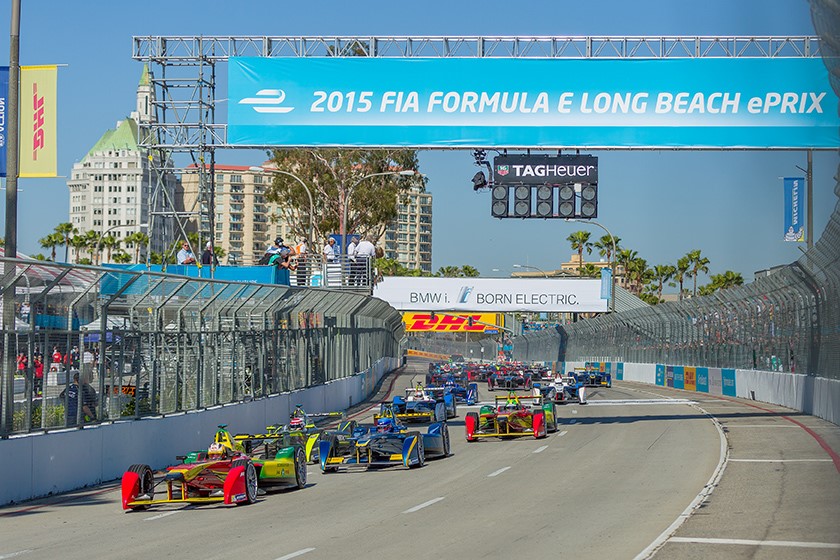 The $25 general admission ticket gives fans access to unreserved seating, the popular eVillage and a number of other activities for the entire race day. For an extra $10, fans can secure exclusive access behind the scenes with access to the race paddock. In addition, from now until March 25, fans can buy three tickets and get a fourth ticket free.

More than just a race, the Long Beach ePrix will include plenty of activities throughout the day to keep the whole family entertained. In the eVillage Fan Zone ticket holders will be able to get up close to the drivers at the autograph session, watch some amazing street dancing and see displays of electric vehicles.

On-track, in addition to the racing, there will be demonstrations of electric karts, exotic electric cars and even an electric Big Foot monster truck.

Formula E also offers fans the unique FanBoost concept, where they can vote to give their favorite driver an additional boost of energy that can be used during the second half of the race. Voting takes place through the official Formula E website and app, as well as Twitter and Instragram using #FanBoost, from 12 days prior to the race until six minutes after the start of the race.

Formula E CEO Alejandro Agag said: “The USA is one of the most important markets for Formula E due to the size and strength of electric car sales there. It is the aim of Formula E to promote the use of electric cars by showing they can be fast and sexy as well as help to reduce air pollution in urban environments. Last year the Long Beach ePrix was one of the best of the season, with Leonardo DiCaprio and Adrien Brody giving the race some Hollywood glamour, while on track it was an emotional victory for Nelson Piquet Jr at the circuit where his triple world champion father scored his first Formula One win 35 years earlier."

There have been four different winners in the six races so far, but reigning champion Piquet (NEXTEV TCR) is still looking for his first podium finish of the year. The championship is currently being led by a pair of ex-F1 racers, with Renault e.dams’s Sebastien Buemi 22 points up on Abt Schaeffler Audi Sport’s Lucas di Grassi, while Sam Bird from DS Virgin Racing is in third.

Long Beach was selected to host one of the 11 international races by championship promoters Formula E Holdings due to its commitment to sustainable mobility and long-running success in hosting large scale sporting events and high-visibility special events. California is the number one market for plug-in electric vehicle (PEV) sales with around 12 percent of national sales alone occurring in Southern California. The Long Beach circuit is the longest running street track in the US beginning in 1975. It hosted Formula One grands prix from 1976 to 1983 before staging annual CART, Champ Car and IndyCar races. Formula E cars use a modified seven-turn, 1.32-mile version of the regular IndyCar circuit. The Formula E cars will use the same iconic start/finish line adjacent to the Marina before heading off in a clockwise direction past the Rainbow Lagoon. They will then turn right onto South Pine Avenue before rejoining with the more familiar track configuration. The cars will then pass around the grounds of the Convention Center before a final right-hand hairpin brings them back across the start/finish line.â€¨All Formula E events take place in just one day – practice, qualifying and a 50-minute race – in order to help minimize disruption to the city.