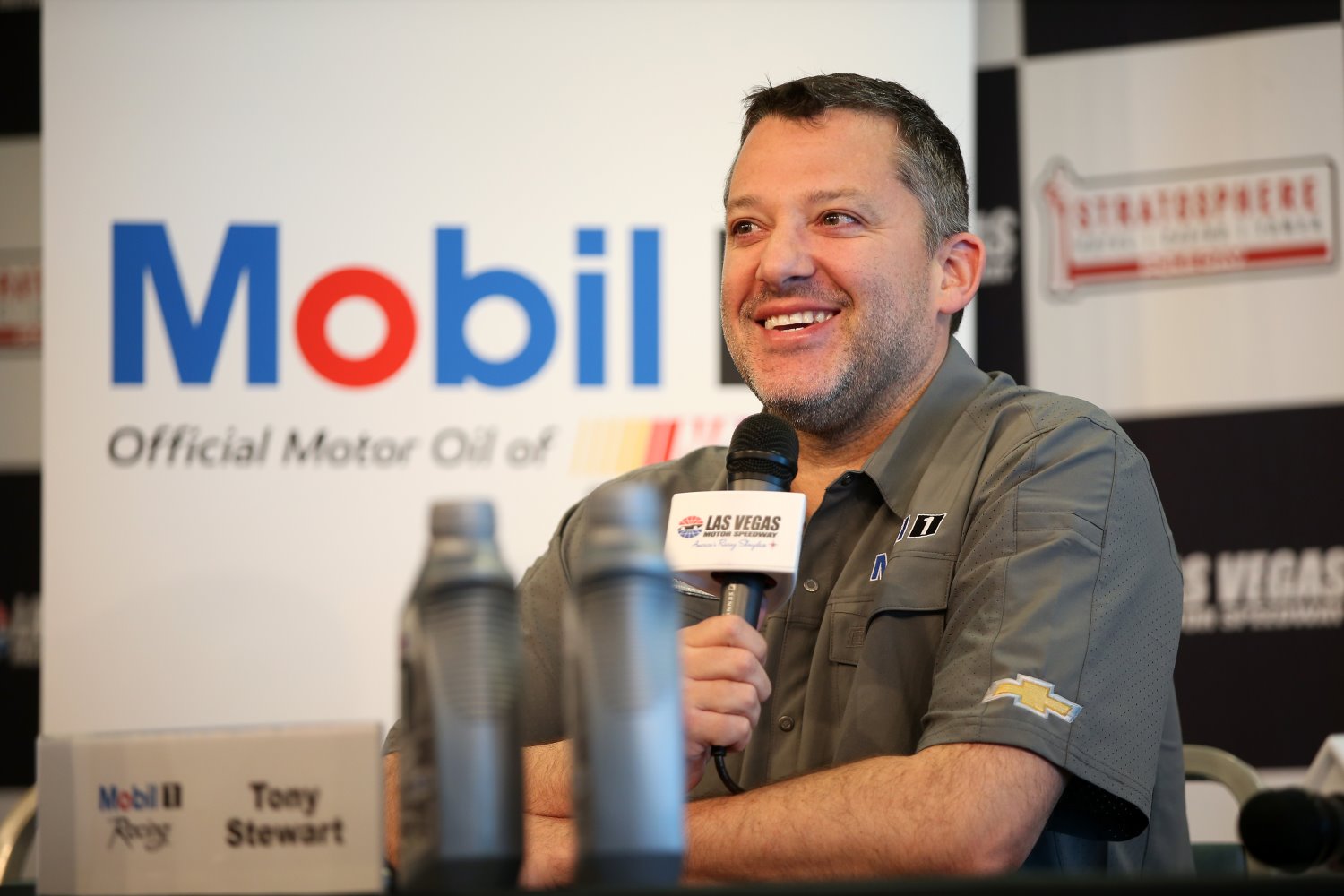 UPDATE Tony Stewart has good news to savor in terms of his health. "You're not waiting on me as far as my mind, I'm ready to go," Stewart told SiriusXM NASCAR Radio after Sunday's Good Sam 500, won by SHR driver Kevin Harvick in thrilling fashion. Four races into his final season, Stewart has yet to turn a lap because of a burst fracture of his first lumbar (L1) vertebra — the uppermost bone in the lower back — in an all-terrain vehicle accident Jan. 31.

"It's just, we had a good doctor visit this week and the X-rays were good," he added. "It wasn't really to see about the bone growth as much as just making sure the rods and screws were staying in place where they wanted them. They were really happy." A return to the cockpit is still on indefinite hold for Stewart.

"The funny part was when the doctor told me, or the surgeon cleared me to drive a street car," Stewart said of his most recent doctor's visit March 9. "I didn't have the heart to tell him I've been driving for almost three weeks. I'm not really one to follow the doctor's orders anyway, so we're fine. I've been up all day today and I feel great, so we're excited about where we're at right now."

Stewart told SiriusXM that part of his rehabilitation has involved strengthening his core; he is expected to make a full recovery. Stewart also indicated that his next scheduled doctor's appointment would come in late April. NASCAR.com

03/10/16 Tony Stewart was evaluated today by doctors, who checked on the injury he sustained in a Jan. 31 all-terrain vehicle accident where the driver of the #14 Chevy for Stewart-Haas Racing suffered a burst fracture of the L1 vertebra. Satisfied with the amount of healing that has taken place, doctors implemented a rehabilitation regimen that will hasten Stewart's recovery.

Future evaluations will be necessary before a timetable is known for Stewart's return to racing.

A full recovery is expected for the three-time NASCAR Sprint Cup Series champion, as is a return to the #14 Chevy this season. Plans for an interim driver have not been finalized. Stewart-Haas Racing

03/09/16 It's been more than five weeks since Tony Stewart suffered a burst fracture of his L1 vertebrae when the ATV he was driving landed awkwardly while the three-time Sprint Cup Series champion vacationed with friends near the California-Arizona border.

Stewart, who has been at the track the past two weekends but continues to deal with soreness from his injury, will learn more about his future in the No. 14 Stewart-Haas Racing Chevrolet on Wednesday when he undergoes a series of x-rays on his injured back.

"That's the first time since the surgery that we'll have an update, have a progress report," Stewart said during a news conference last weekend at Las Vegas Motor Speedway. "But for a month now, I haven't done anything but just kind of chill out. The doctors want me lying in bed and walking. They don't want me sitting and standing. I'm definitely breaking the rules."

Although no timetable has been given for his return, Stewart hopes to get back behind the wheel of the car he co-owns as soon as possible in order to salvage as much as he possibly can of what will be his final season in NASCAR's top series. When he does return, Stewart also hopes that NASCAR will grant him a waiver that would make him eligible for the Chase for the NASCAR Sprint Cup despite missing multiple races.

Last year, NASCAR waved the perfect attendance requirement on Kyle Busch but kept the requirement that the Joe Gibbs Racing driver finish the regular season in the top 30 in points to be Chase-eligible. A similar arrangement is expected to be made for Stewart, provided he returns within a reasonable timeframe. Busch missed the first 11 points races of last season with injuries.

"Whatever they decide, they decide," Stewart said. "I would like to think it's going to be similar to what they did last year with Kyle. The biggest thing I'm worried about is just getting this healed properly. That's my biggest concern, is just making sure that it heals right. I'm anxious to get x-rayed because I'm very curious about what the progress has been like for the last 30 days. … The biggest concern is just making sure it heals right the first time." Fox Sports