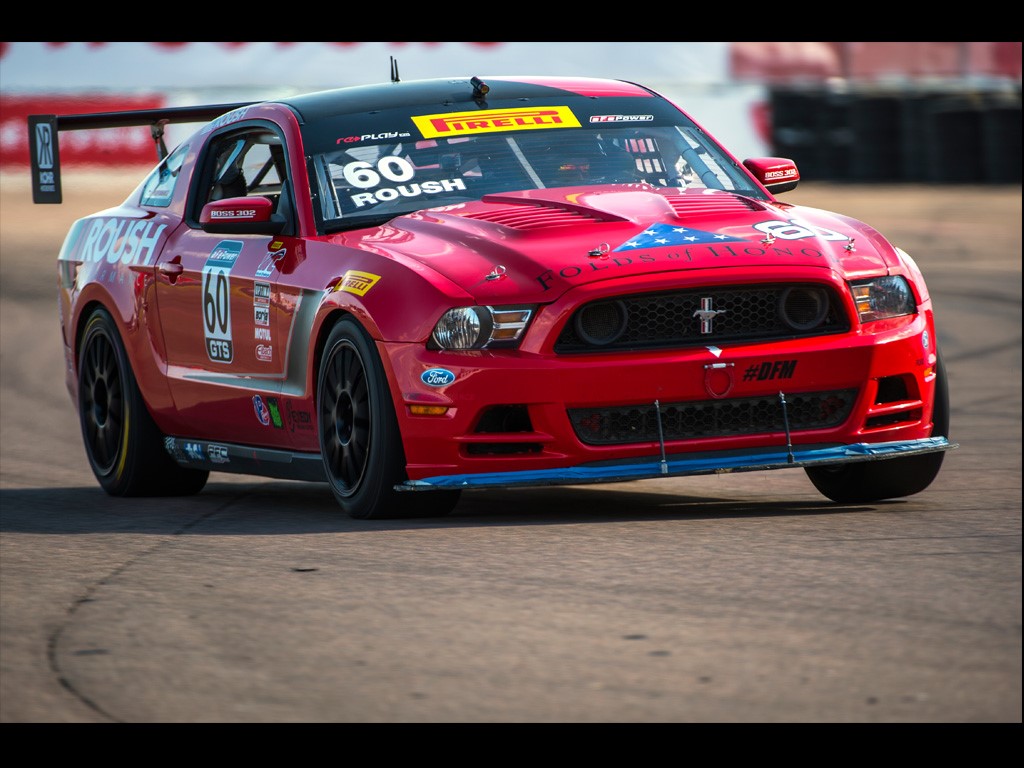 When the green flag flew, pole sitter Roush Jr, in the No. 60 Roush Performance Ford Mustang Boss 302, launched cleanly and into the lead through turn 1. Behind him, second-on-the-grid Lawson Aschenbach, in the No. 10 Blackdog Speedshop Chevrolet Camaro Z28, went door-to-door through the opening corner with Sandberg, who had started third in the No. 13 ANSA Motorsports KTM X-Bow GT4. Aschenbach was able to hold the position with Sandberg slotting into third.

By lap five, Stacy and Sandberg were locked in a battle for third while the top four – Roush Jr., Aschenbach, Sandberg and Stacy broke away from the rest of the field, with Roush Jr. holding a .856 second lead over Aschenbach, 1.70 seconds clear of Sandberg, and 2.083 seconds in front of Stacy.

Back-of-the-field traffic would play a role in the battle, as the cars jockeyed for position moving through the field. Stacy and Aschenbach contacted going door-to-door through turn 1 and Stacy was able to slide by for second position. The contact would leave Aschenbach’s Camaro Z28 slightly wounded shedding loose parts.

As the drama unfolded behind him, Roush Jr. had built an eight-second race lead at the 35-minute mark. On lap 27, Sandberg passed Stacy for second place while Aschenbach lost fourth to Parker Chase, in the No. 19 Performance Motorsports Group Ginetta GT4 and then fifth to Dore Chaponick, in the No. 12 ANSA Motorsports KTM X-Bow GT4.

Roush Jr. would take the checkered flag for his first career Pirelli World Challenge win, with Sandberg closing the gap to 2.6 seconds to finish second with Stacy in third place. Stacy was also awarded the VP Racing Fuels Hard Charger for gaining three positions during the race. Sandberg was awarded the Cadillac ATS-V Move of the race for his pass on Stacy for second.

“Street races are really treacherous. But they are a lot of fun," said Roush Jr. “The shape of the street makes you follow lines that you wouldn’t normally on a race track. Dean Martin and his team really know how to setup the Mustang for the street courses. Dean was always good in the street races. I would put them against anyone. We talked about setup and strategy on the course. We wanted to finish the race well too. I knew Lawson (Aschenbach) would put on the pressure at the start and I felt it all race. I knew people would be coming at the end of the race like Brett in the X-Bow and Nate. I just went as fast as I could without putting the car at risk."

“The KTM X-Bow was extremely consistent today, just like at COTA," said Sandberg. “We were able to manage the tires and had a good race with Lawson (Aschenbach) and Nate (Stacy). It is very, very hard to get around the Mustang and Camaro with their straightaway speeds. Actually, I thought we would be better here at St. Pete than at COTA. But we won at COTA. The X-Bow is better suited for a tight track like here. But we learned a lot about the car at COTA. We were able to get the speed out of the car at COTA. But here it is so difficult to overtake. Overall, I’m very happy with the second place finish."

“I made a big run on Lawson (Aschenbach) in turn one in trying to get second," said Stacy. “I hit the paint on the runway front straight and started sliding. On the inside, I got upside of Lawson and nudged him a little. I wish it would have been clean for the pass. I really study video a lot right now to learn about the courses and talk with Jack (Roush), Dean (Martin) and the team to learn about strategy. They are so helpful for me, even though I am 16."

Results are provisional until posted final. GTS drivers now get set for Round 4 of the 2016 season scheduled for Saturday at 5:10 p.m. eastern at St. Petersburg. Watch the race live at motortrendondemand.com and follow live timing and scoring at world-challenge.com.