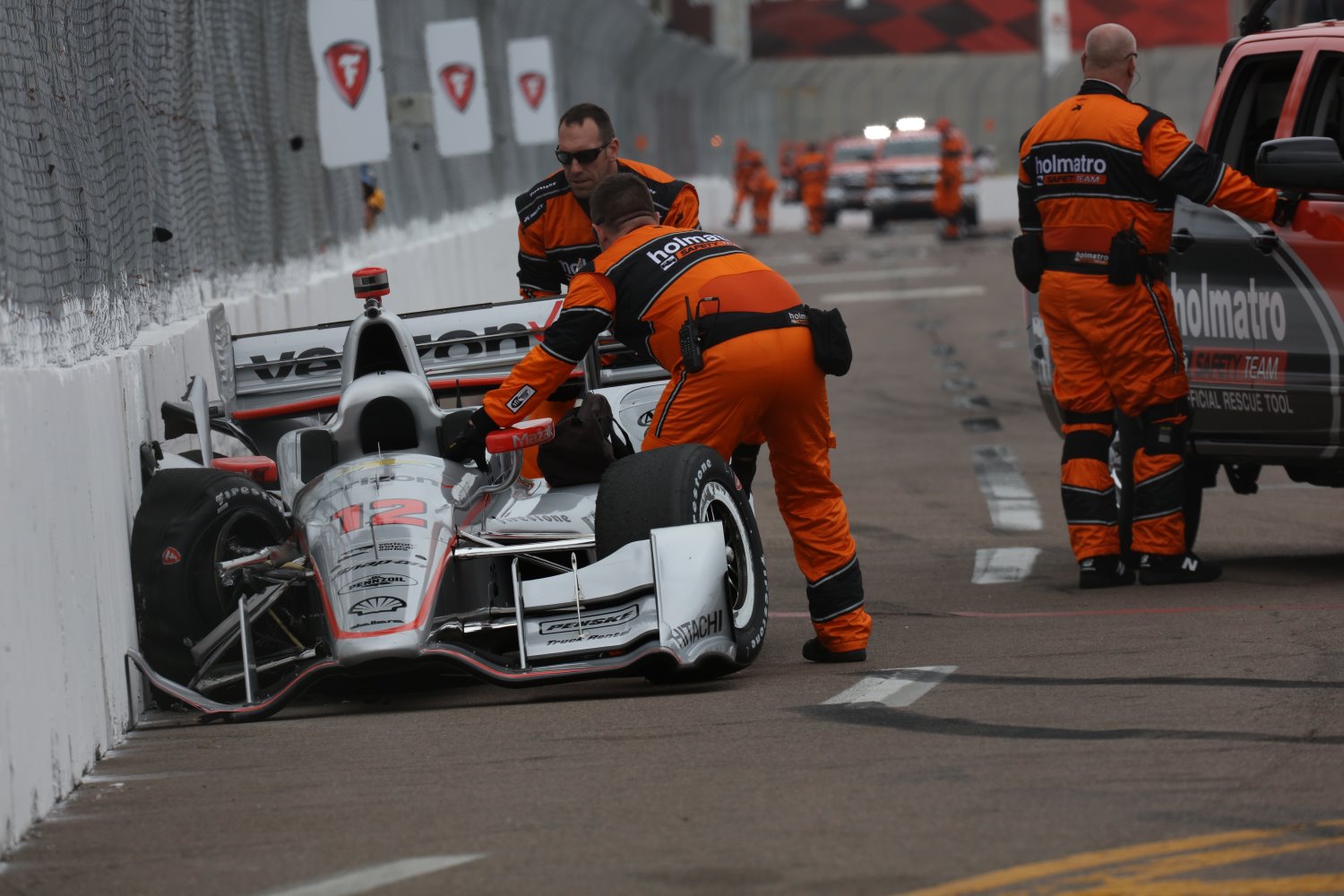 Will Power dug himself a hole by crashing in the first practice session for the Firestone Grand Prix of St. Petersburg. The Team Penske driver redeemed himself by soaring to the top of the leaderboard in the second session.

Power's lap of 1 minute, 0.9431 of a second (106.329 mph) was best among the 22 Verizon IndyCar Series drivers competing in the 2016 season opener on the 1.8-mile, 14-turn temporary street circuit by Tampa Bay. The lap came within three-tenths of a second of the track record Power set last year on his way to winning his fifth pole position at the track.

On just his fifth lap of the first practice, Power crashed his No. 12 Verizon Team Penske Chevrolet entering Turn 9, the car sustaining heavy right-side damage when it hit the wall. Power reported to his crew that he was adjusting the car's brake bias with one hand when it hit a bump and he lost control, forcing the crew to hurriedly repair it between sessions.

"Definitely a bad start," admitted Power, who won the St. Pete races in 2010 and 2014, "but full credit to the guys to get the car back out there, get some laps, get my head around the track and so on.

"Yeah, it was a good session. (We) ran in circles with the setup, but P1, pretty happy."

Scott Dixon, the 2015 Verizon IndyCar Series champion, was second fastest for the day at 1:00.9573 (106.304 mph) in the No. 9 Target Chip Ganassi Racing Chevrolet. Dixon has finished second at St. Petersburg three times but never won here.

"Today, (I'm) pretty happy," said Dixon, fifth on the all-time Indy car wins list with 38. "St. Pete is a bit of a thorn in our side. Second practice, we made some wholesale changes and pretty good gains.

"I think the car has some good potential, which you can see," Dixon added. "Hopefully we can carry that through to tomorrow (for qualifying). Definitely for us it's always a tricky track. It's Friday. Obviously Sunday is the day that counts. Hopefully we can start near the front and make the most of it and have a strong start to the season."

Simon Pagenaud, Power's Team Penske teammate who led the first practice session, was third in the afternoon at 1:01.1796 in the No. 22 Hewlett Packard Enterprise Chevrolet. Honda-powered drivers scooped up the next five spots on the leaderboard, led by Graham Rahal in the No. 15 Steak 'n Shake Honda (1:01.2924).

The afternoon session was halted for nearly 40 minutes for repairs to the track surface in Turn 3. The Holmatro Safety Team and track workers patched the areas with high-quality, quick-setting concrete, allowing the practice to resume for 40 minutes.

A third practice session is scheduled for 11:55 a.m. ET March 12, with knockout qualifying including the Firestone Fast Six session to decide the Verizon P1 Award for the pole starting at 3:40 p.m. The 110-lap race – the 13th on the city street circuit that also utilizes a runway of Albert Whitted Airport – is set for March 13 (12:30 p.m. ET, ABC).

THE MODERATOR: We are pleased to be joined by the two fastest drivers of Friday's practice session, Will Power and Scott Dixon.

Scott, second fastest today, also on podium three times before, but haven't gotten that win yet. What is it going to take to get to that next step?

But today, pretty happy. St. Pete is a bit of a thorn in our side. Second practice we made some wholesale changes and pretty good gains. Put the one set of new tires, halfway through the run actually got some traffic.

I think the car has some good potential, which you can see. Hopefully we can carry that through to tomorrow.

Definitely for us it's always a tricky track. It's Friday. Obviously Sunday is the day that counts. Hopefully we can start near the front and make the most of it and have a strong start to the season.

THE MODERATOR: Will Power, two wins here in St. Petersburg and two pole positions. You bounced back well in the afternoon after a difficult morning (with a crash in practice).

WILL POWER: Yeah, definitely a bad start, but full credit to the guys to get the car back out there, get some laps, get my head around the track and so on.

Yeah, it was a good session. Ran in circles with the setup. P1, pretty happy.

THE MODERATOR: What is your reaction when the other drivers that have been in today say it will take beating a Penske car to win?

WILL POWER: Yeah, I don't know. It's just one of those tracks. It's like Ganassi at Mid-Ohio. Even when we're not that far off, sometimes things just unfold in the right way.

Yeah, quite different setups on the cars. I don't know. It's just one of those tracks for us and I hope it continues.

THE MODERATOR: Questions for Will and Scott.

Q: What is the difference between the Chevy and Honda aero kits?

WILL POWER: Yeah, obviously had a big gain right there. Good competition. I'm sure it's going to be all mixed up tomorrow in qualifying.

SCOTT DIXON: Yeah, they seem pretty even par right now. They were quickest in the first session today. We'll have to see what happens in qualifying, but I expect it to be pretty similar.

Yeah, the cars look quite similar now. Maybe that explains it a little bit.

Q: How close do you think we are to a sub one-minute (lap)?

WILL POWER: Yeah, it will be close. Hard to say with the weather and everything, the wind.

Q: Both of you are driving Chevys. I think Chevy did a change in the rear wing behind the pod section. Do you feel any difference in the car? Are you running that one?

WILL POWER: Yeah, there's definitely gain, more efficient. The car is a little bit quicker. They worked hard. We had to do something to open a bit of a gap from Honda, so it's good.

SCOTT DIXON: Yeah, it's maybe changed the car a little bit. Each team is probably going to be different. But between the two cars that were first and second today, the aero configurations are quite a bit different.

I think we're still feeling out a lot. We haven't done a whole lot of testing. The parts came kind of late.

Hope that we gain a little bit more once we understand the panel a little bit better. Kudos to Pratt (and Miller) and Chevy for bringing the first update of three. Definitely a jump in the right direction.

Q: Will, you told me you crashed in the morning because you hit bumps. Is that the same area where the track came apart?

WILL POWER: No, no. No, it's not. (Power crashed on the backstraight leading to Turn 9).

WILL POWER: Yeah, I didn't even see actually.

Q: There was a red flag on the track, so something was wrong.

SCOTT DIXON: It was a manhole. I was the one that actually hit it, I think. I was kind of halfway in the middle of track, hit it. I think around the manhole, they fill in about, I don't know, two foot either side with concrete. It pulled the concrete out.

I guess they used some (Set 45), some composite material they typically use on the ovals to fix it. It was between Turns 3 and 4 on that straight, and then there was another one.

Q: Was the place that they fixed on the track the same place where there’s always a bump in Turn 3?

SCOTT DIXON: Hard to define. There's many bumps down that part of the track.

You can see it. If you walk the track, visually it stands out pretty big. I think with how we come out of the corner, it's typically not a part of the track that we're on, unless you're passing somebody or it's a restart or something. Yeah, one of the areas that you'll see.

Q: Have you talked to your teammate Max Chilton yet?

SCOTT DIXON: I have not.