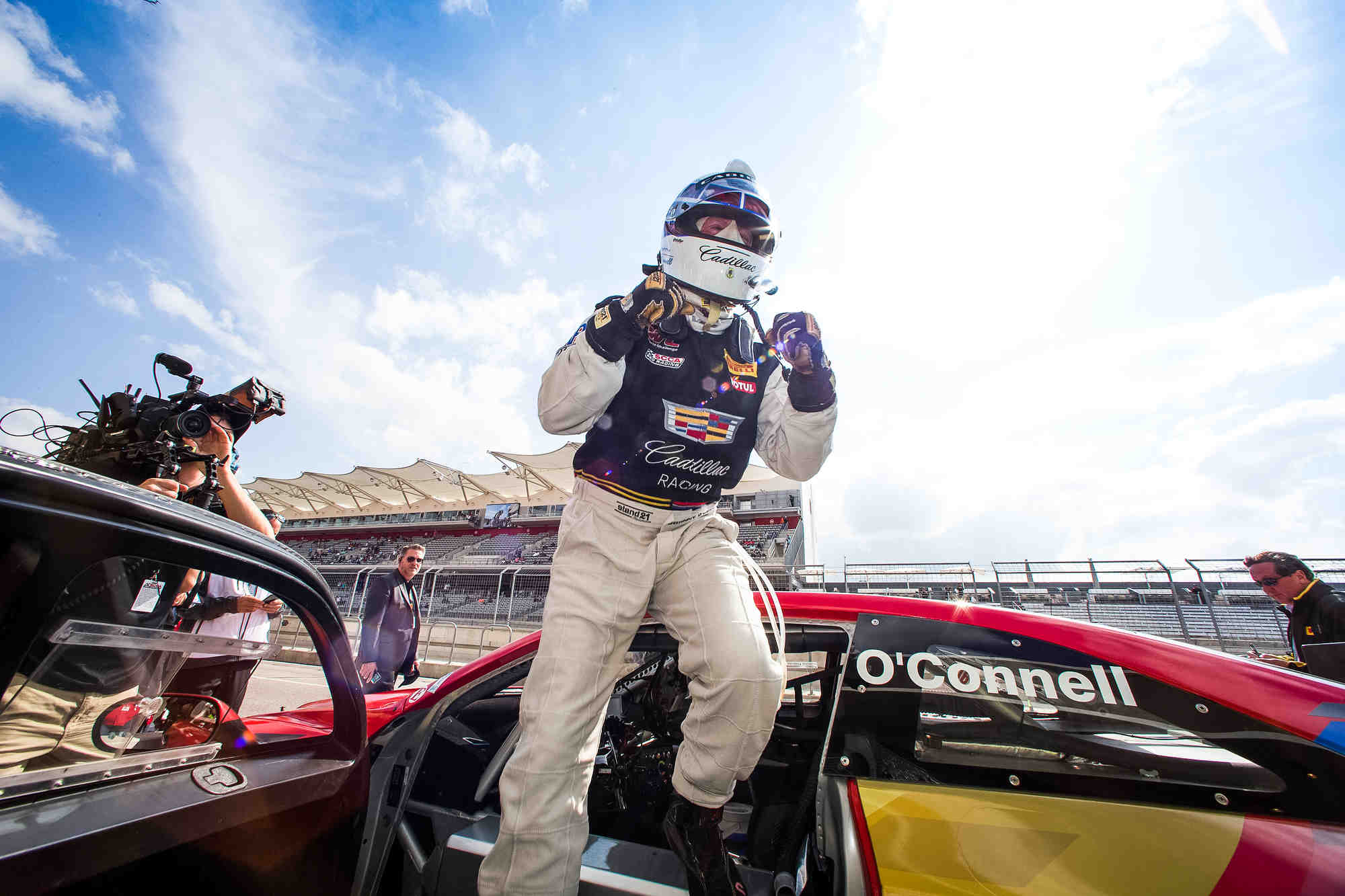 Austin, Texas – Johnny O'Connell, Martin Fuentes and Sloan Urry scored victories at the Circuit of the Americas in GT, GTA and GT Cup respectively, in Round 2 of the 2016 Pirelli World Challenge season at the Nissan Grand Prix of Texas presented by VP Racing Fuels.

On the restart with 40 minutes to go in the 50-minute race, Davison took the lead from his Nissan teammate but was soon issued a 10-second stop-and-go penalty for avoidable contact with Long off the start. That penalty gave Heitkotter the lead back over Cadillac teammates Johnny O'Connell, in the No. 3, and Michael Cooper, in the No. 8, with Alvaro Parente, in the No. 9 K-PAX Racing McLaren 650S, behind them.

GTA pole-sitter Fuentes, driving the No. 07 Scuderia Corsa Hublot Under Armour Ferrari 458 Italia, led in class slotting into the 7th overall position in the race, with Frankie Montecalvo, in the No. 66 DIME Racing Dime R&D Mercedes AMG SLS GT3, in second (10th overall), and Michael Schein, in the No. 16 Wright Motorsports Porsche GT3-R, third in class (16th overall).

The 20-minute mark of the race saw Heitkotter continue to manage a five-tenth-of-a-second lead over O'Connell, with Cooper and Parente following. In fifth it was Andrew Palmer, in the No. 87 Bentley Team Absolute Bentley Continental GT3, who was just ahead of Kyle Marcelli, in the No. 2, CRP Racing Audi R8.

In GTA, the lead margin was six seconds with Fuentes ahead of Montecalvo, while Urry was managing a three-second lead on Udell in GT Cup, with Hardeman running third in class.

With 17 minutes to go, O'Connell pounced going through turn 13, passing Heitkotter for the lead and then pulling a gap. The pass earned O'Connell the Cadillac ATS-V Move of the Race Award.

That allowed Cooper to challenge Heitkotter for second, as Parente also closed on the two and then went around both the Nissan and the Cadillac for second as a multi-car battle erupted. Through turn 12, Palmer followed Parente, while Heitkotter slowed and then entered pit road with a suspected flat tire.

As the field shuffled at the front, O'Connell, series GT Champion for the last four years, opened a gap over Cooper in second. Marcelli was up to third ahead of Fogarty and Thompson. Fogarty's Gainsco car continued to move forward, catching Marcelli with six minutes to go in the race. Using traffic to his advantage, Fogarty passed Marcelli for third position slotting in behind the two Cadillacs.

In GTA, Montecalvo continued to close on Fuentes, bringing the gap down to 2.5 seconds, but not getting any closer, while a similar race was unfolding in GT Cup, with Udell closing in on Urry for the race lead.

O'Connell would go on to take the victory ahead of Cooper in second and Fogarty completing the podium. The last lap saw Thompson execute a solid maneuver on Marcelli on the outside, exiting turn 1, to take over the fourth position. Marcelli finished fifth on the day.

In GTA, Fuentes won his second straight race in as many days finishing sixth overall, with Montecalvo in second, ninth overall, followed by Mills, third in class and 15th in the final order.

"The key for us was to get a decent start," said O'Connell. "Saturday (Round 1) I managed to go from third to ninth in the first corner as everyone seemed to be doing a rim shot on the outside. Today was better in turn one as I went from third to third. I thought there might be a penalty for the 33 Nissan (Davison) as he went on the far outside to pass me. When I saw the misfortune that Patrick Long had (with the front straight crash), I knew this was an important day. Patrick is a top line driver with a great team. When you see something like that happen, you need to make the most of it.

"You have to connect the dots. Heitkotter did an amazing job leading that race. I had an idea in my mind how the pass would go and I was doing little things to try and setup the pass for the lead. It took me a lot of time to get in position to make things right for the pass. I was able to set up the pass in turn 12 with more momentum. I faked like I was going left and went right. Then I didn't want to make any mistakes. Then you hope everyone behind starts battling among themselves and they slow each other down. That is pretty much what happened. I'm very proud of everyone at Cadillac. They dug deep and it's a good way to start the season."

"I can't complain about the weekend at all. Winning both poles and both races," said Fuentes. "The Scuderia Corsa Ferrari team gave me a tremendous car all weekend. Today's race saw me in the middle of the GT fight with some of the McLarens, Audis and others. They were really fighting each other hard today. I think I wore out my tires a little too much early in the race. The car was moving around quite a bit at the end of the race. I just wanted to keep the car under me and be smooth. The street circuit in St. Pete is next and anything can happen there. So we really wanted to score as many points as possible this weekend at COTA. Our goal is the championship and we need score points each weekend and on a consistent basis. Overall, it was a great weekend for us."

"It feels amazing to take my first Porsche GT Cup win here at COTA," said Urry. "Last year was a little frustrating by not getting on the winner's podium. So today is very special. I'd like to be up here many more times. Our race was pretty clean. I took the lead and had to battle Alec (Udell) in the early portion of the race. He put the pressure on me the whole race. I knew I couldn't make any mistakes. "

Of note, Montecalvo earned the Optima Batteries Best Start Award advancing 11 positions at the start of the race as well as the VP Fuels Racing Hard Charger Award for gaining 10 positions overall in the race.

Catch all the action from COTA on an expanded CBS Sports Network broadcast, scheduled for Sunday, March 13 at 10:30 a.m. eastern. Unofficially, O'Connell leads in GT Driver's Championship points, while Fuentes leads in GTA, and Urry in GT Cup. GT, GTA and GT Cup teams next take to the track on the Streets of St. Petersburg, Florida, for Rounds 3 and 4, March 11-13, with live timing available on world-challenge.com and live video on motortrendondemand.com.