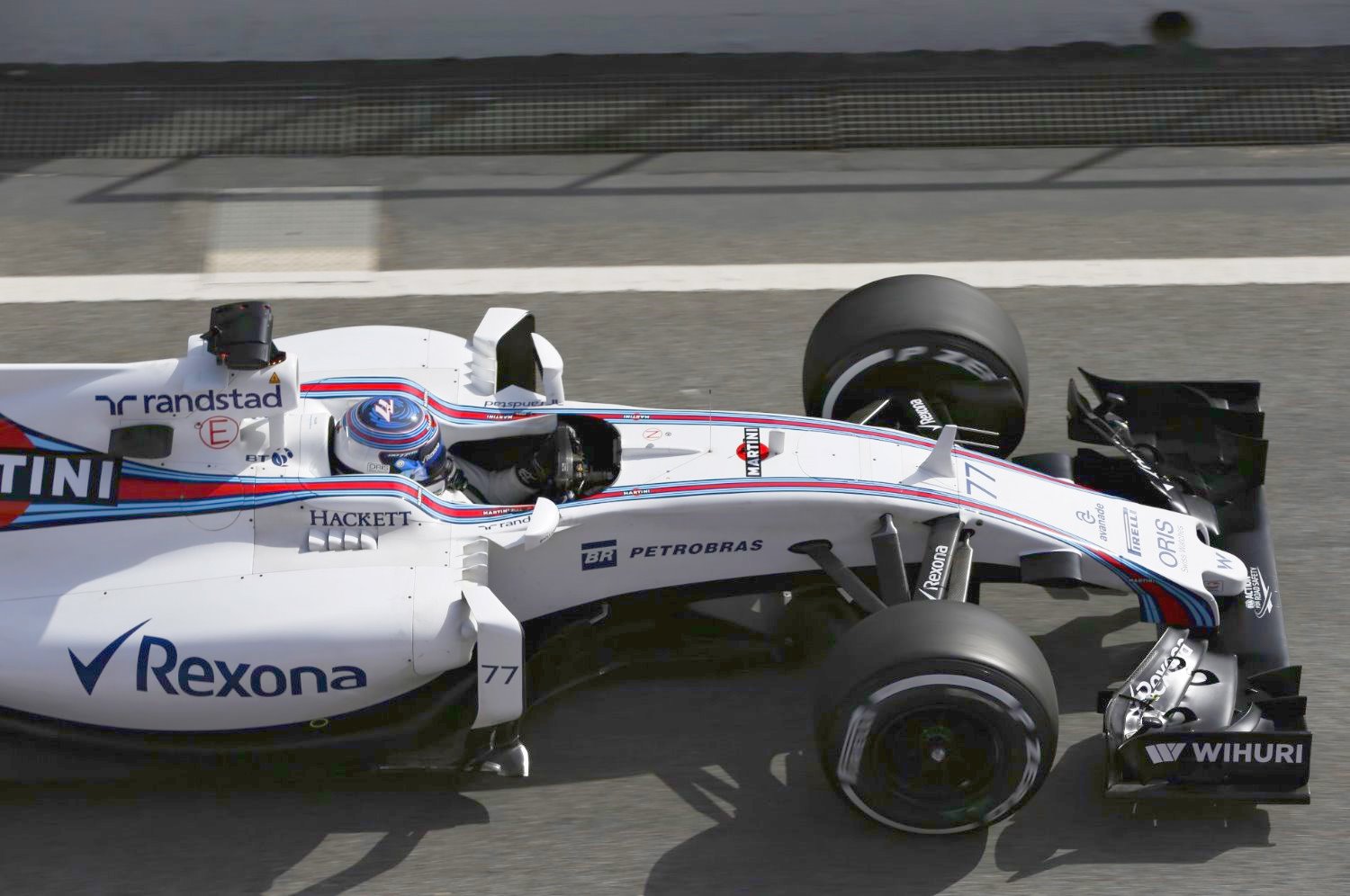 For the first time in two weeks Valtteri Bottas put Williams on top in Formula 1 pre-season testing at Barcelona thanks to the Pirelli Super-Soft tires.

The Finn clocked a 1m23.261s in the afternoon on the softest Pirellis, and he also completed a series of qualifying simulations on the soft tires.

Mercedes again split driving duties with Lewis Hamilton's fastest time from the morning, set on the soft Pirellis, 0.361 seconds off the pace of Bottas on the Super-Softs.

Kevin Magnussen was another to run the super-softs and it paid off as the Renault driver finished third quickest. He was 0.672s down and got in 126 laps on the day.

Jenson Button's McLaren ended the day fifth on soft tires, with 121 laps to his name.

The American Haas outfit had a day to forget, with Esteban Gutierrez managing just one lap due to turbo problems.

Valtteri Bottas:
It’s been another good day. That’s it for me now for testing before we go to Melbourne. I’m feeling prepared and good in the car. I’m glad we have made progress during testing and I’m sure we will do even more before Melbourne. That’s it now for driving from my side. There’s more to follow in the next two days as we will discover more with Felipe. Thanks to everyone in the team for all their hard work over the last two tests and thanks also to Mercedes HPP.

Lewis Hamilton
Reliability is our strength at the moment. The strength within the team has grown even further. It's really motivating for the season. The car was good, quite strong, we did some lower fuel running today but some work needs to be done balance wise. Getting onto the softer tyre was a good experience but we've got some work to do still.

Nico Rosberg
It was another useful day of testing. I did a full Melbourne race simulation and I feel well prepared now for the first race. The team have done a great job so far both in the factory and here on track. The car feels great out there and I haven't had a major problem yet. I hope this will continue for the last two days.

James Key (Technical Director)
"A positive and productive day today. We completed more laps than we planned for, so the programme was well covered. In the morning we ran some aero tests and several new chassis developments, continuing to learn more about the STR11 chassis. In the afternoon we concentrated on race runs, as we did yesterday. Carlos did a good job with several long runs in quick succession and gave very useful feedback for us to work on this evening. To accomplish such a high mileage again today with 166 laps is another positive and testament to the good work the team have done over the last few months with the new car. We look forward now to the last two days of the test, only one day left of final preparations for each driver before we head to Melbourne."

Carlos Sainz (Car 55)
"What a wonderful day for myself and the whole team! It was a trouble-free one and we managed to run through the planned programme. I’m very happy. Everything is feeling great and I feel better in the car every day that goes by, which is promising. I’m also very pleased to have completed a further 166 laps today, it shows once again that the car is reliable and it gives us confidence before the start of the season."

Daniel Ricciardo
"Quite a lot of laps today. Obviously we did a race simulation, which was definitely on the to-do list and I’m glad we got through it successfully. It was important to do that today and also important for me to do the laps to see how my body feels and it was positive on both sides. The car feels very decent. The last half hour on track the wind picked up a bit and the sun got a bit lower so that made it a bit more challenging but otherwise a pretty good run today."

Head of Race Engineering, Guillaume Rocquelin:
"A very busy day for the whole team out here today. In the morning we did a lot of pit stop practice, all of which went very smoothly. We also built some aero mapping and normal running into the morning session, which was productive. In the afternoon, we moved across to race simulation. I don’t think we were alone in that, as plenty of teams were out there working through race programmes and I’m happy to say that ours went well. We got through 135 laps today, the most we’ve done in a single day at these tests so far and we didn’t encounter any problems. We are hoping to run through a similar programme with Dany for tomorrow when he takes over the driving again."