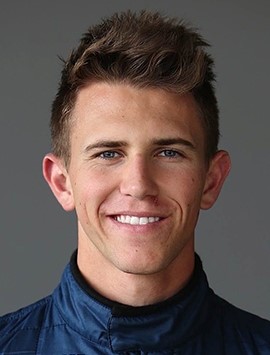 PALMETTO, Fla. – Pursuing a racing career requires sacrifices, but few drivers have had to make the kind of choice that TJ Fischer did: continue playing college football, or put all his focus on auto racing. Four years after leaving his football pads behind, Fischer joins the Mazda Road to Indy, signing with Team Pelfrey in the Cooper Tires USF2000 Championship Powered by Mazda with the hopes of achieving his dream: a ride in the Verizon IndyCar Series.

Fischer’s family moved from Wilsonville, Ore., near Portland, to Vacaville, Calif., when he was 10 years old, but it wasn’t until the move to the city south of Sacramento that the racing bug hit in earnest.

What first started your interest in racing?

My dad used to race go-karts when we lived in Oregon and I was always at the track with him. I loved it; I thought it was so cool. We had the equipment and I was always at the racetrack, so it was natural that I would get into a kart. When we moved to California, it really clicked with me. There were so many tracks within an hour of us and there was so much great competition in the area.

Take us through your racing career to date.

I competed nationally in karting and won some championships. My goal was to get into formula cars, so when I was ready, I did a test. Eric Purcell was my engineer and my mentor, along with my coach, Jeff Andretti. There’s so much more going on in a car, and more is expected of the driver – learning data, understanding weight transfer and vehicle dynamics – so having their knowledge made for a really good combination.

I did a limited schedule in 2012, because I was going to college and playing college football. I gave that up and switched to an online school to pursue my racing career. 2013 was great; I won 17 Formula Car Challenge races in a row, won the championship and was a Mazda Shootout finalist. Later that year, I got the chance to move to the UK and race with Cliff Dempsey Racing in the Formula Renault 2.0 UK series. I lived with the Dempseys; they’re a great racing family. It was a good opportunity to experience not only the racing but the culture. It was an entirely different side of racing. It was very competitive and challenging, with a lot of international drivers. I finished sixth in the points.

I raced in the Formula Renault 2.0 ALPS championship last year, finishing eighth as the top rookie. It was a full European championship and I got to race at tracks like Monza and Spa, which was a dream come true.

How difficult was the decision to give up playing college football?

I had a scholarship to play football, but I knew that racing was my real passion. I did well, with a couple of receptions, but I wasn’t able to put 100 percent focus into anything when I was playing football AND going to school AND trying to race. Football and school alone is a full-time job. Racing became a weekend thing; I would play football on Saturday and race on Sunday. But Jeff Andretti told me that if I wanted to make racing my career, I had to make it 100 percent. He was a big proponent of me staying in school, but we knew that if I was going to race, I had to do it right now. So now I’m doing online school and focusing on racing.

What got you interested in the Mazda Road to Indy and the USF2000 series?

My goal has always been IndyCar, so it made sense to come back to the States and join the Mazda Road to Indy and now seems like a very good time to come into it. It’s the ladder system that takes you to IndyCar. Mazda really supports the program and the scholarship is a really good incentive. Also, we’re trying to bring sponsors on board so we can continue moving up the motorsports ladder, and the program makes it possible to offer a sponsor a return on investment. The competition is the other big factor – there are so many great drivers coming into the series. The series has always had good drivers and that looks to be continuing. So if I want to have a career in IndyCar, coming back here and joining the Mazda Road to Indy was the best way to go. And with Team Pelfrey, they had USF2000 and Pro Mazda teams and now are in Indy Lights. They went from the ground up, which is really cool.

What are your expectations for 2016?

I’m trying not to have too many expectations, but inevitably, I want to go out there and win! Realistically, I think we can compete for top fives, try to get on the box and get to the top step. It will take a lot of work, learning the car and the tires. And I haven’t raced on any of the tracks except for Mazda Raceway Laguna Seca.

Favorite racetrack and what is your best memory about that track?

I like Mazda Raceway Laguna Seca, but I have to say Portland International Raceway. My dad took me there to see IndyCar races when I was young and I have so many good memories from that. In my first year of formula racing, I got to race there and it was so cool, to race on the first track I ever went to.

Playing football. If I’d stayed, I’d be finishing my senior year of eligibility. It’s strange, because all my friends are graduating from college this year!

Do you have a “hidden" talent?

Is ping pong a hidden talent? I’m okay, but my neighbor beats me regularly.

What do you do to relax?

I got introduced to meditation last year as a way to calm my nerves and get out of my head a little bit. But I enjoy playing sports, training, running and biking. And I play basketball. I can’t play football anymore!