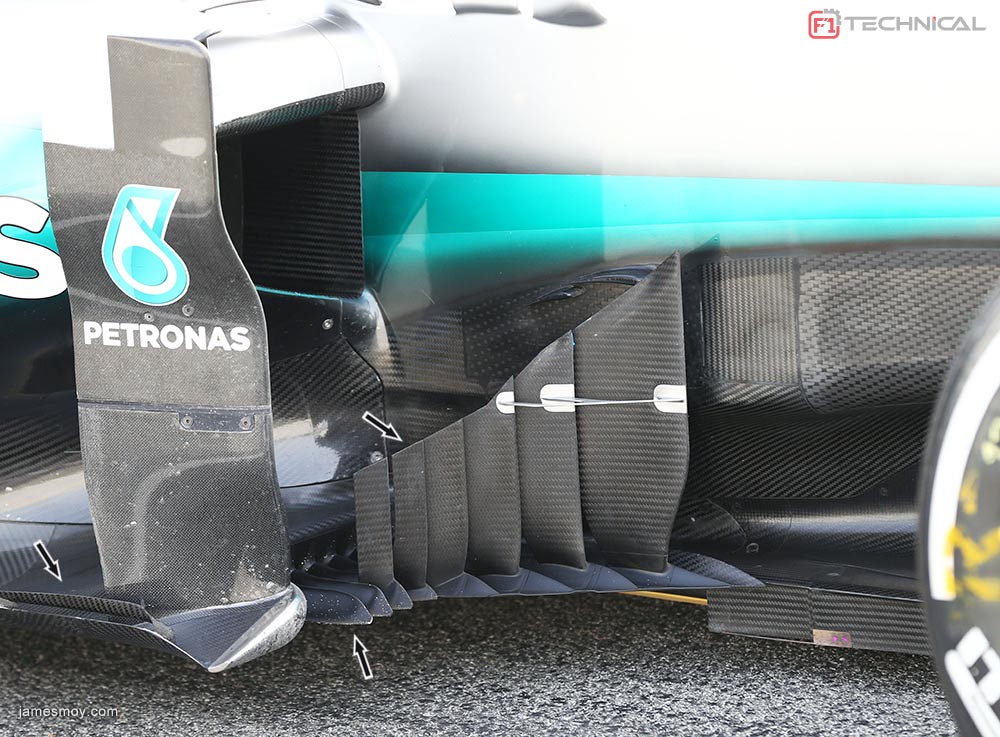 Having completed more than the targeted mileage on the first day of testing, and actually topping their mileage record from any test session since the introduction of the current engine regulations, Mercedes are again one step ahead of the competition as they have already started to add new aerodynamic components on their car, a single day after the W07 debut.

Named the W-floor by Mercedes, the area ahead of the sidepod now features a number of serrated horizontal and vertical panes, all aimed at directing or conditioning airflow towards the rear of the car. The more conventional layout here is to have a barge board, which is a solid vertically standing panel that guides air away from the centerline of the car, and around the sidepods. The thing is that with sidepod undercuts becoming so thorough and smooth, that there is less need for such a panel, forcing teams into the investigation of other things to put in this – largely unregulated – area.

So, instead of pushing air outboard, the 6 new panels allow for air to bleed through the system, into the low pressure area that is behind the "combined bargeboard". The interesting bit here is that each vertical panel attached to a separate forward extension of the floor. And just like with the vertical items, this used to be a single, continuous panel of carbon fiber.

However, as air is flowing outboard in this area, the slight curve in the floor extensions help "fetch" some of that air, and push it underneath the floor, where it will be worked further downstream by the diffuser to create efficient downforce all over the car's floor.

Judging the complexity of the elements, it looks unlikely that many teams will be able to copy this rapidly, but one can wonder if this is the beginning of the end for the traditional barge boards that have existing on F1 cars for numerous years. F1 Technical