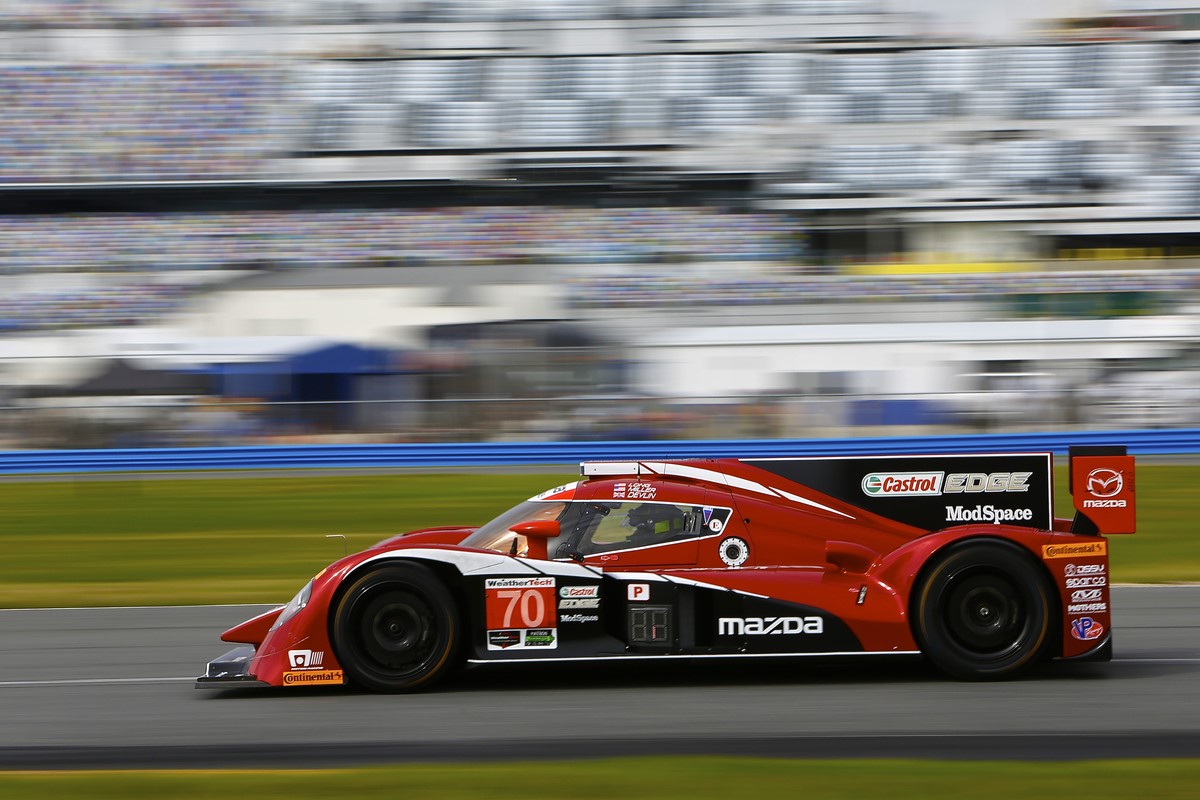 When John Doonan, Mazda’s director of motorsports for North America, recalls the 2016 Rolex 24 At Daytona, the memories are bittersweet.

Yes, it was the fastest the two Mazda Prototypes have gone since they joined the IMSA WeatherTech SportsCar Championship at its inception in 2014. Yes, one of the cars led the race several times, turning out some until-then fastest laps of the race. And yes, when called upon, the drivers and the SpeedSource crew excelled in some trying circumstances.

But no, neither car finished, with both suffering from problems that didn’t show up in extensive pre-season testing.

The more successful run came from the No. 55 Mazda Prototype, which took the overall lead four hours into the race with driver Jonathan Bomarito. He pitted for a driver change while leading at the six-hour mark for Spencer Pigot to take over, but the engine wouldn’t restart and the team changed had to change the electronic control unit, losing three laps. Pigot regained the three laps, and turned the car over to Tristan Nunez, who had to park the No. 55 just short of the halfway mark for valvetrain problems, and a subsequent fire.

For the No. 70, the news was even worse. Just 20 minutes into the race, driver Tom Long slowed and parked on the infield grass. A failed crankshaft and flywheel did enough damage that the car wasn’t able to return.

Again, Doonan says that none of these issues showed up in testing. Again, it’s another confirmation to the old adage: Testing isn’t racing. “Both problems were surprises after all the miles we had driven before the season started," Doonan says.

If there were to be problems with the Mazdas, it was likely to be with the new MZ-2.0T engine, because the past two seasons have essentially been extended tests for the rest of the car, when the team did the best they could with an uncompetitive diesel engine.

The gas-fired MZ-2.0T is similar to the engine the Dyson team ran in LM P1 competition in the American Le Mans Series before the ALMS merged with GRAND-AM to form the WeatherTech Championship. The block is carryover but little else, and the other engines used in the Prototype class have logged a lot of race miles.

“We’re still learning," Doonan says. “We left Daytona with a spring in our step, knowing we can run up front. It was encouraging – more positives than negatives."

The SpeedSource team moves to the Mobil 1 Twelve Hours of Sebring with the same driver lineup, plus one new driver that Doonan can’t name, pending finalized contracts. The race, on March 19, is a week before the IndyCar season opener in St. Petersburg, where Pigot will make his IndyCar debut for Rahal Letterman Lanigan, but Doonan expects to have Pigot back in the car at Sebring.

Whether it’s at Sebring or another track, it’s likely that sooner rather than later, Mazda will earn its first podium in the Prototype class, after more than two full years of work. And when it happens?

“I’d be lying if I said I haven’t thought of that," Doonan says. “That whole scenario has gone through my head, just like it has gone through the head of every team member. I want it for all those people who have worked so hard. At least now, when we leave the garage area, we know we’re going to be in the hunt."