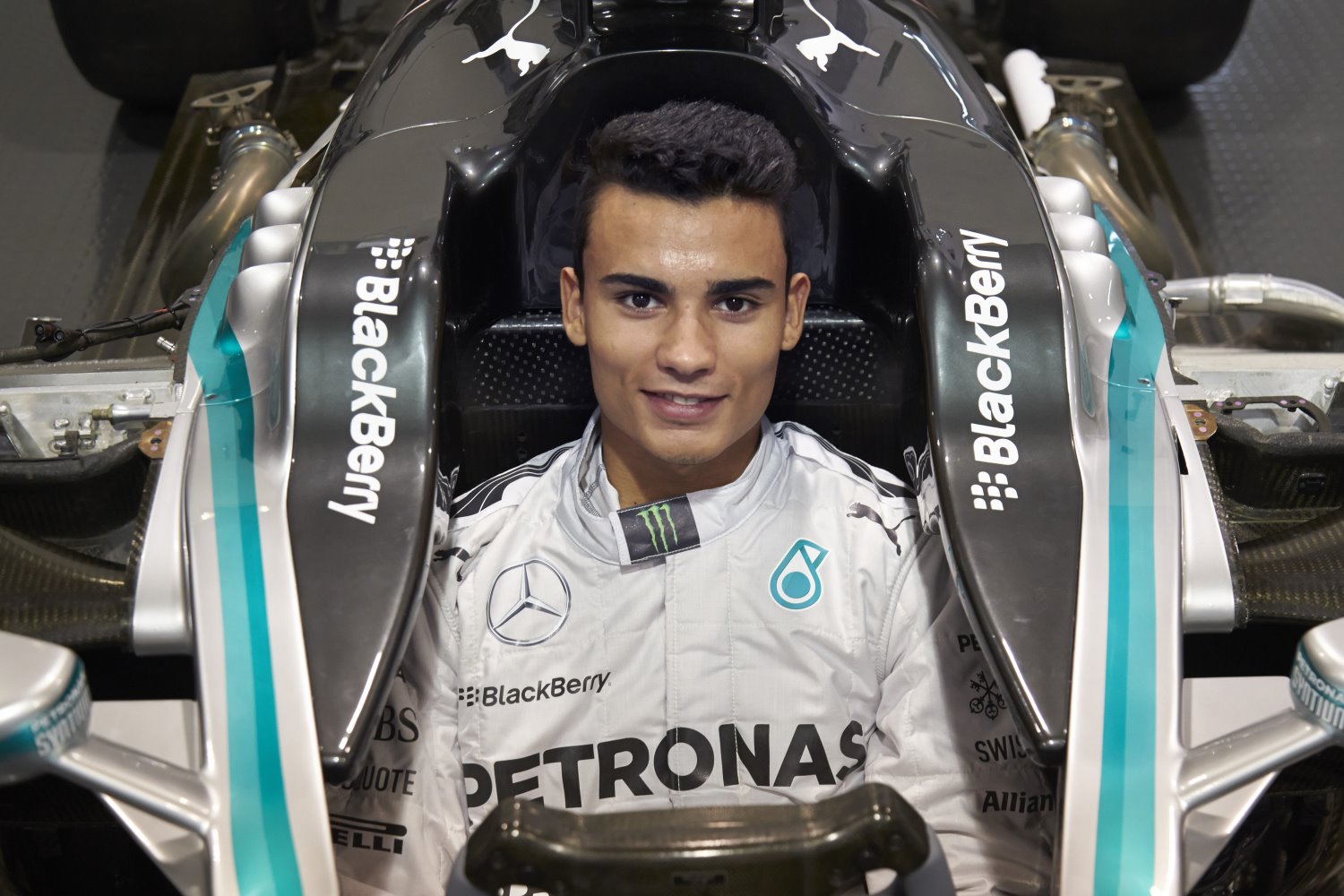 Wehrlein to race with Manor in 2016 – Bild
(GMM) Pascal Wehrlein will make his F1 debut for Manor this year.

That is the claim on Wednesday of the major German daily Bild Zeitung, referring to the Mercedes reserve driver and reigning DTM champion.

Mercedes chief Toto Wolff has admitted to negotiating with the newly Mercedes-powered backmarker team about a seat for Wehrlein this year, but it was believed Alexander Rossi, Rio Haryanto and Will Stevens are all better funded.

However, Bild claims: "Pascal Wehrlein (21) will race this year for the Manor team. The deal is to be announced soon."

According to former F1 driver and now German television pundit Christian Danner, it is good news.

"From a talent perspective, Pascal has already proved that he belongs in formula one. Now he must show it to all of the German fans," he said.

Villeneuve reveals F1 career mistakes
(GMM) 1997 world champion Jacques Villeneuve has admitted to making a couple of mistakes during his formula one career.

"I don't regret anything," he told the French magazine Auto Hebdo.

"My only mistake was to renew the contract with BAR (in 2002) when I had an offer from Renault," the French Canadian revealed.

Had he switched to Renault, Villeneuve would presumably have been Fernando Alonso's teammate, who went on to win his two world championships in 2005 and 2006.

Villeneuve, 44, also admitted his career could have taken a different turn shortly after wrapping up his first and only title with Williams in 1997.

"I actually received an offer from McLaren," he said.

"Adrian Newey had called me to ask me not to sign with BAR and to join him instead," said Villeneuve. "He liked me because he had seen what I could do with his cars at Williams and there was enormous respect between us."

At McLaren, Mika Hakkinen won back-to-back world championships in 1998 and 1999.

"It's easy to say today that it would have been great at McLaren, but how can you miss having your own team?" added Villeneuve, who co-founded and funded BAR with his manager Craig Pollock in 1999.

Petrov eyes F1 future for Russian team
(GMM) F1 could have a Russian team in the not-too-distant future.

Former Renault and Caterham driver Vitaly Petrov, who was the first Russian to race in formula one, will this year return to action in Le Mans' LMP2 prototype class, driving for SMP Racing.

SMP is a Russian bank, and Petrov said of the racing program: "Although nothing is defined yet, we will perhaps one day be in formula one.

"LMP1 is also under consideration," he is quoted as saying in Paris by France's Canal Plus broadcaster. "SMP Racing has the means to become one of the best teams in the world."

Grosjean enjoys simulator run in 2016 Haas car
(GMM) Romain Grosjean says he enjoyed his first run at the wheel of Haas' 2016 car — in the virtual world.

The Frenchman told the sports daily L'Equipe that, two weeks before the real version gets up and running, he drove the new American team's first car in the simulator.

"The feeling was quite good, even if, in the beginning, it was necessary to solve lots of small technical problems.

"But once the grip improved, it was possible to drive well," Grosjean said, revealing that the track he drove was Barcelona, where Haas' machine will also get its real-world rollout in two weeks.

He cautioned that relying too heavily on the simulator would be a mistake, "but I think the foundations of the car appear healthy".

Grosjean said he also crossed paths at the factory with new teammate Esteban Gutierrez, who was having a fitting for his 2016 radio earpiece.

"Esteban was, as usual, smiling and cheerful," he said. "We both want to work well together to help the team.

"He will also go in the simulator and confirm – or not – my first feelings about the car," added Grosjean. "We still have a lot to do, including the fitting of the seats.

"I believe it will not be until the first Barcelona test when I see the car for the first time in real life."

The Venezuelan, replaced for 2016 by former McLaren driver Kevin Magnussen, confirmed that his F1 adventure came to an end due to problems with his PDVSA sponsorship.

"The situation changed dramatically within a few hours and I found myself without a sponsor, and everything else came from that," Maldonado told Italy's Autosprint.

"I don't feel anger but I feel anything but happy," he admitted. "It was a bolt from the blue."

Maldonado's annual backing by PDVSA, the crisis-struck Venezuelan state-owned oil company, was estimated at about $50 million a year.

As to what went wrong, the 30-year-old answered: "No comment. These are sensitive areas that I am yet to clarify. I'm thinking only of an alternative so that I can keep racing.

"PDVSA has always done a great job and also supported other drivers and other sports, and I am sure that the support for other sports will continue."

Maldonado contested almost 100 grands prix for Williams and Lotus, even winning the 2012 Spanish grand prix, but he said: "I raced in the worst moments of their (the teams') history."

As for his Barcelona win, Maldonado insisted: "It was one of the biggest surprises in the history of F1, but not to me, because I deserved that joy.

"The party in the Williams factory was warm and unforgettable — anybody who thinks it is a cold team is wrong," he said.

And Maldonado's final season was in 2015, during which Lotus almost collapsed.

"It's a shame," he said, "because the car was good, but the financial problems meant we couldn't develop. Then the reliability problems came from old pieces that broke which were not replaced to save money."

Schumacher staying in F4 this year – report
(GMM) Michael Schumacher's son will delay his move into the highly-competitive European F3 series for at least another year.

That is the claim of Germany's Sport Bild, revealing that 16-year-old Mick will instead spend another full year in the formative single seater category Formula 4.

It is believed, however, that young Schumacher will combine both the German and Italian editions of F4 in 2016, amid speculation he will drive for the Ferrari-linked Prema team.

"Mick did a very good job in his tests for us," said team boss Angelo Rosin. "We are very interested in working with him in the forthcoming season."

Schumacher's manager Sabine Kehm said she will only make a statement "when we have something official to say".

Briatore changes face with plastic surgery
(GMM) Flavio Briatore is a radically changed man, according to the latest gossip reports emerging from Italy.

Chi, an Italian gossip magazine, has published paparazzi photographs of the former Renault chief looking not only markedly thinner, but with a noticeably changed face.

The flamboyant 65-year-old Italian, ejected from F1 amid a race-fixing scandal and more recently convicted of tax fraud, confirmed his new face in the form of an Instagram 'selfie'.

Dr Diaz Gutierrez, a Spanish plastic surgeon, told Spain's El Mundo newspaper that he estimates the work would have cost Briatore "between 10,000 and 25,000 euros".

F1's 'glorious days' are now – Andretti
(GMM) Mario Andretti has counted himself out of the constant criticism of modern formula one.

The F1 legend and 1978 world champion raced in the glorious era between the late 60s and the early 80s, but he stops short of saying it was F1's best period.

"There will always be those who say 'The old days were the best', the Italian-American, now 75, told the Spanish daily newspaper El Pais.

"But I always prefer to look forward. The glorious days of F1 are now. I enjoy the great popularity around the world and the technology on the limit," he said.

"In those (earlier) years we saw some amazing icons and some great drivers, but I like how everything has progressed. I'd give anything to be 30 years younger and a driver now," Andretti added.

He also said to talk down the 'heroes' of today's F1 grid is wrong.

"The champions today would be champions in the other decades," said Andretti. "And vice versa. The only difference is that we had less safe circuits and cars."

However, Andretti also backs F1's planned next moves, possibly including bigger and grippier tires and at least 1000 horse power.

"Any driver will tell you that he wants more power," he said. "And the fans would love to see faster cars too — fans are very important and we must not forget it.

"Now they are talking about making them (the cars) more difficult to handle and it would create interest and show up the drivers who have more talent," he added.