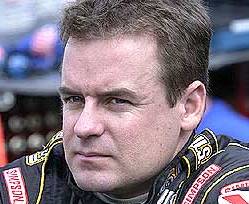 Thirteen years ago, Jerry Nadeau's life changed forever. During a practice session at Richmond International Raceway, he crashed hard into the wall, driver's side first. That crash left Nadeau with a traumatic brain injury, immobility on his left side, a collapsed lung and broken ribs. The crash not only ended Nadeau's career, but also had great implications for his personal life.

"A lot of tough things happened," Nadeau said. "I got divorced, had to sell my house and had to start over again. Then I lost my father who I was very, very close to from cancer." While Nadeau admits his road has been up and down, he has had some successes recently both on and off the track.

"I've got a great wife," Nadeau said. "I have a little girl who is eight months old. I also have a thirteen year old Natalie from my first marriage. So, I have two girls and that's really interesting." Nadeau has also been keeping his hand in racing in a way that might be somewhat surprising to his fans.

"I love driving and I don't think I can get that out of me," Nadeau said. "I got asked to go to Japan a month ago and I did some driving at Fuji Speedway, an old Formula One race track. His racing fix also included attending one of dirt track racing's most competitive events. "I went this year to one of the greatest weekends in racing, the Chili Bowl," Nadeau said.

"It was amazing and really fun. I reconnected a little bit and saw a couple of people I knew from the past. It was just great to be back." Nadeau has also kept his driving skills sharp in a unique way, by helping young drivers handle the challenges of being newbies behind the wheel. "I do work for an organization called B.R.A.K.E.S.," Nadeau said.

"It's a driving company where we help teenagers learn to drive." B.R.A.K.E.S., which stands for 'Be Responsible And Keep Everyone Safe', was started by drag racer Doug Herbert after his two boys were killed in a car accident. In addition to his work on the track and with teen drivers, Nadeau has also been focused on reaching out to others who have suffered a traumatic brain injury.

"For me, right now, it's all about family and kids," Nadeau said. "Like so many people, I'm still on the fence on where I want to go and what I want to do. "I appreciate all of my former fans. But I need them to know that I'm now trying to move on and get on with my new life as it is today. I want everyone to know that you just have to keep going and marching forward, no matter what You all have to know that there will be something on the horizon that will hopefully inspire you. That is what I'm trying to hold onto at this point in my life." Popular Speed