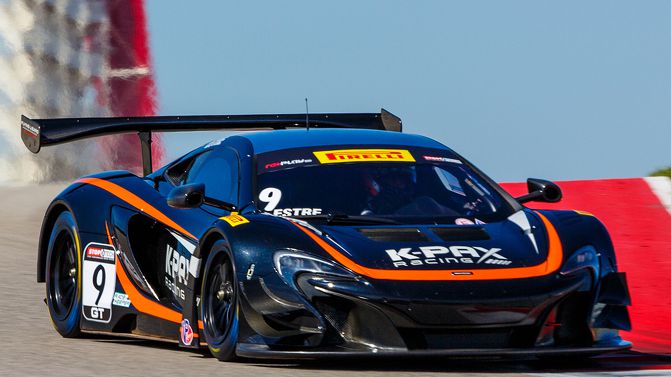 After a highly successful season competing in the Pirelli World Challenge with the McLaren 650S GT3 in 2015, K-PAX Racing is returning to the competition bigger and fully armed to fight for the championship with three McLaren 650S GT3 race cars for 2016.

"This is going to be our year," said K-PAX Racing owner Jim Haughey. "The McLaren 650S GT3 is such a powerful car, and with this driver lineup, we’re fully confident we’ll be at the front. Alvaro has proven his speed in Europe, and Colin impressed McLaren GT enough to be taken in to the Driver Academy. Austin has the experience to build on for a very impressive year. This year, we have everything it will take to represent McLaren at the forefront of sports car racing in North America."

The championship winning team will build on last year’s success by again utilizing the engineering, crew and marketing services of Flying Lizard Motorsports.

"We can’t wait to get the 2016 Pirelli World Challenge season underway," said Program Manager Darren Law. "We’re locked and loaded for a serious assault on the championship, bringing three McLarens and three new drivers all capable of winning races and taking the championship."

In 2015, then McLaren GT Factory Driver Kevin Estre earned the team four wins and an additional three podiums, proving to be a seriously contender for the championship. Replacing Estre in the #9 McLaren 650S GT3 will be McLaren GT Factory Driver Alvaro Parente. After a successful career in open wheel racing where he won the 2005 British Formula 3 Championship and the 2007 World Series by Renault Championship, including the A1 GP and GP2 series, Parente made the transition to sports cars. In 2011, Parente became an official McLaren GT Factory Driver, quickly establishing a career and a reputation worthy of the title. The 2015 International GT Open series champion will be new to the Pirelli World Challenge as well as many of the tracks he will be competing on.

"Alvaro is a McLaren GT Factory Driver with a very impressive resume," said Law. "In speaking with other members in the racing community, including Kevin Estre, we won’t be disappointed in his speed or race craft and we are looking forward to having him join us this year."

American racer Colin Thompson is no stranger to victory circle, building an impressive resume during the last few years in sports cars. He established himself as a champion in 2014, claiming the IMSA Porsche GT3 Cup title, then followed up with the 2015 Pirelli World Challenge Porsche Cup championship. Thompson drove with Flying Lizard Motorsports twice in 2015, at the 12 Hours of Sebring and Petit Le Mans, again proving his skills behind the wheel. At the suggestion of the Lizards, McLaren GT invited Thompson to test with the factory at circuit Paul Ricard in France. After an impressive test, McLaren GT invited Thompson to join their development driver program, appointing the young American a position as a McLaren GT Academy Driver.

"I have known Colin for several years now and have been following the progression of his racing career," said Law. "His resume shows he can not only turn a fast lap, but he knows how to race. The Pirelli World Challenge GT class is a logical next step for him to show that he can compete at the highest level of GT racing. We are proud to be a part of this new step in his career, and are excited to see what he will do."
Although only 17 years old, Austin Cindric’s racing resume is growing at a rapid pace. Though just a few years ago, his claim to fame may have been his father, Team Penske President Tim Cindric, Austin has now made a name for himself as an incredibly diverse and talented race car driver. In 2014, Cindric raced in both Mazda’s Road to Indy’s USF2000 series and the Global RallyCross Championship, as well as in a one-off race in the Continental Tire Sports Car Challenge. That same year, he was one out of five drivers selected by Porsche for their annual Young Drivers Academy. In 2015, he participated in the prestigious Bathurst 12 Hour and also raced full time in the Continental Tire Sports Car Challenge, and the Red Bull Global RallyCross Lites Series. That year he also competed in select rounds of the NASCAR Camping World Truck Series, Pirelli World Challenge and the FIA World Rally Cross Championship. At Canadian Tire Motorsport Park, Cindric became the youngest winner in Continental Tire Sports Car history, proving he has what it takes to finish on top.

"I first had the opportunity to work with Austin when he came through an advanced racing class at the Bondurant Driving School while I was working there a couple of years ago," said Law. "I knew then that he was a talented driver. Austin has since been very busy racing multiple types of cars, and has driven more cars at the age of 17 than most people have raced in their entire career. He is well rounded and fast, and we really want to give him an opportunity to fight for a championship this season."

The Pirelli World Challenge has become one of the leading championships, attracting top names from across the GT grid – both in terms of teams and drivers," said Andrew Kirkaldy, McLaren GT Managing Director. "The K-PAX Racing team proved to be a front runner throughout 2014 with the 650SGT3, and enter the new season looking to build on the success with a strong line-up. Alvaro is one of the fastest and most consistent drivers on the grid, and he brings a wealth of experience racing with the 650SGT3 throughout last year. The championship visits some of the most exciting and iconic circuits across North America, and It will be a new challenge for him, but he is joining a world class outfit, and I am confident that the combination will be hard to beat."

The team will hold a test with the three cars and drivers later this month at Circuit of the Americas before the 2016 Pirelli World Challenge season kicks off at the circuit March 3-6.