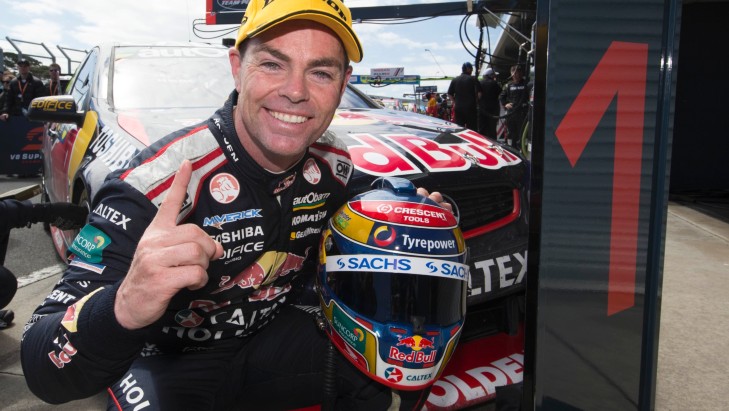 Craig Lowndes has won his fifth Barry Sheene Medal for the best and fairest driver at tonight’s V8 Supercars Gala Awards in Sydney.

Lowndes won his sixth Supercheap Auto Bathurst 1000 this year and also brought up his 100th race win before eventually finishing runner up to Mark Winterbottom in the Drivers’ Championship. The 41 year-old was also voted the Fan’s Choice Most Popular Driver.

Red Bull Racing Australia walked away with the Castrol Edge Champion Team trophy for the sixth year running, securing their place at the head of pit lane for another season. Holden was Champion Manufacturer of the Year.

70 year-old Rogers, who has been involved in Australian Motorsport for over 50 years, is the 19th member of the select Hall of Fame group, joining names such as Peter Brock, Allan Moffat, Mark Skaife and Dick Johnson.

V8 Supercars CEO James Warburton said 2015 had been a year to remember and the sport continued to go from strength to strength with attendances and TV ratings continuing to rise.

"By working together we have built a sport that is better financed, more professional and with bigger crowds and broadcast on more platforms," he said.

Warburton said the sport was the third highest attended in Australia, enjoying a lucrative broadcast deal, attracting new sponsors and expanding into new markets overseas as it continued to improve its profitability.

He thanked the teams, drivers, broadcasters and government and commercial partners for working together to return V8 Supercars to its rightful place as one of Australia’s leading sports.

"The turnaround of our sport is complete and we are now focused on our 2025 vision to take V8 Supercars into the next decade. If we continue to work together we will cement our position as one of Australia’s top three sports and ensure the future of the category for generations to come."