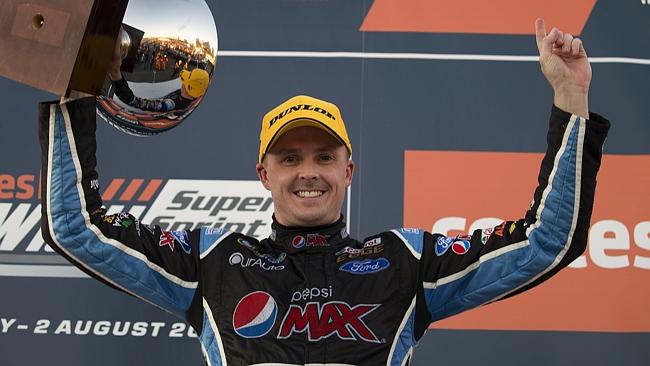 Mark Winterbottom has been awarded the 2015 V8 Supercars Championship trophy after the final race in Sydney this afternoon.

The Pepsi Max driver clinched the title yesterday, but wins with a margin of 238 points over nearest rival Craig Lowndes, having finished fourth in the 250km mini-marathon at the Coates Hire Sydney 500.

The man known as 'Frosty' has been in the category full-time since 2004, and takes home his first title, two years after his breakthrough Bathurst win.

It is also his Prodrive Racing team's first Championship win.

"It's awesome to put the number one on the car," he said after being presented the trophy.

"I've just got to thank everyone who supported us, all the sponsors – they've been amazing, all the partners at home … thank you to them.

He has had some time for it to sink in overnight, and now the season is officially complete, Winterbottom and his team can celebrate properly.

"It's awesome it's complete – we pack up, go home, we celebrate and enjoy it … I'm over the moon, I'm going to hit the party tonight and tomorrow night and the next night and just celebrate this!"

Earlier in the day, the team's young gun Cameron Waters – who stepped in for injured Mostert in New Zealand and Phillip Island – secured the V8 Supercars Dunlop Series.

"For Cam to win the DVS as well, everyone in the workshop has put in a massive effort," Frosty said.

In a first for the sport, Winterbottom will unveil his 2016 car tomorrow with the number one on the side.

While Frosty took the Championship, Shane van Gisbergen continued his love affair with Sydney Olympic Park, winning the final race of the 2015 season and his last with TEKNO.

He led his soon-to-be teammate Jamie Whincup home by 0.4 seconds, winning his third consecutive Sunday race at the street circuit.

The Kiwi appeared lucky to avoid investigation after an early incident with pole sitter and then-leader James Courtney at turn nine. Courtney hit the tires, dropped to fourth and struggled with damage to the rear for the rest of the 74-lap race, ultimately finishing 12th.

Rick Kelly in his Nissan Altima made it home third, with Champion Mark Winterbottom fourth.

"Thanks to my team here, it's an awesome way to finish – thanks for a great three years," van Gisbergen said getting out the car, after congratulating Winterbottom on his title win.

The Prodrive Fords weren't able to take the Teams' Championship after losing Mostert, with Red Bull winning by 136 points as Lowndes and Jamie Whincup gained momentum in the second half of the season.

Both the Teams' and Drivers' Championships Trophies will be officially awarded to Winterbottom and Red Bull Racing Australia respectively tomorrow evening at the V8 Supercars Gala Awards.