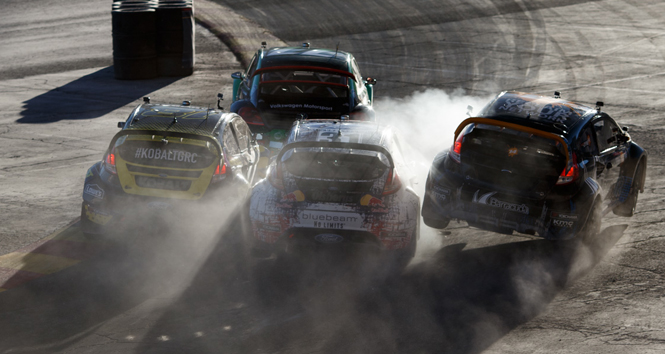 For the second consecutive year, the crowning of the Red Bull Global Rallycross champion will be streamed live and worldwide online via Red Bull TV. The 2015 Red Bull GRC season finale, to take place on the Las Vegas Strip, will be shown starting at 7PM PT/10PM ET on Wednesday, November 4. Toby Moody and Ricky Johnson will call the race from the booth, with Will Christien in the pits.

Both the Supercar and GRC Lites championships will be up for grabs in Las Vegas, with a pair of teammates leading each championship chase. Volkswagen Andretti Rallycross teammates Scott Speed and Tanner Foust have won each of the past four Supercar races and enter the finale going up against one another for the crown, while Olsbergs MSE teammates Austin Cindric and Oliver Eriksson will attempt to hold off Dreyer & Reinbold Racing’s Miles Maroney to settle the GRC Lites championship amongst themselves.

Red Bull Global Rallycross Las Vegas will also be broadcast on the NBC family of networks. The Supercar action will be shown on Sunday, November 8 at 6:30PM ET/3:30PM PT on NBCSN, while GRC Lites racing will air on Wednesday, November 11 at 4PM ET/1PM PT.

Designed to produce some of the fastest and most exciting racing in motorsports, Red Bull Global Rallycross pits small production-based cars against each other in door-to-door racing featuring dirt, asphalt, and table-top jumps. With enhanced engineering and safety features, the cars produce 600 horsepower and can accelerate from 0-60 miles per hour in less than two seconds, and can also withstand 70-foot jumps and other vehicle contact. For more information visit www.RedBullGlobalRallycross.com.

About Red Bull TV & Where to Find It