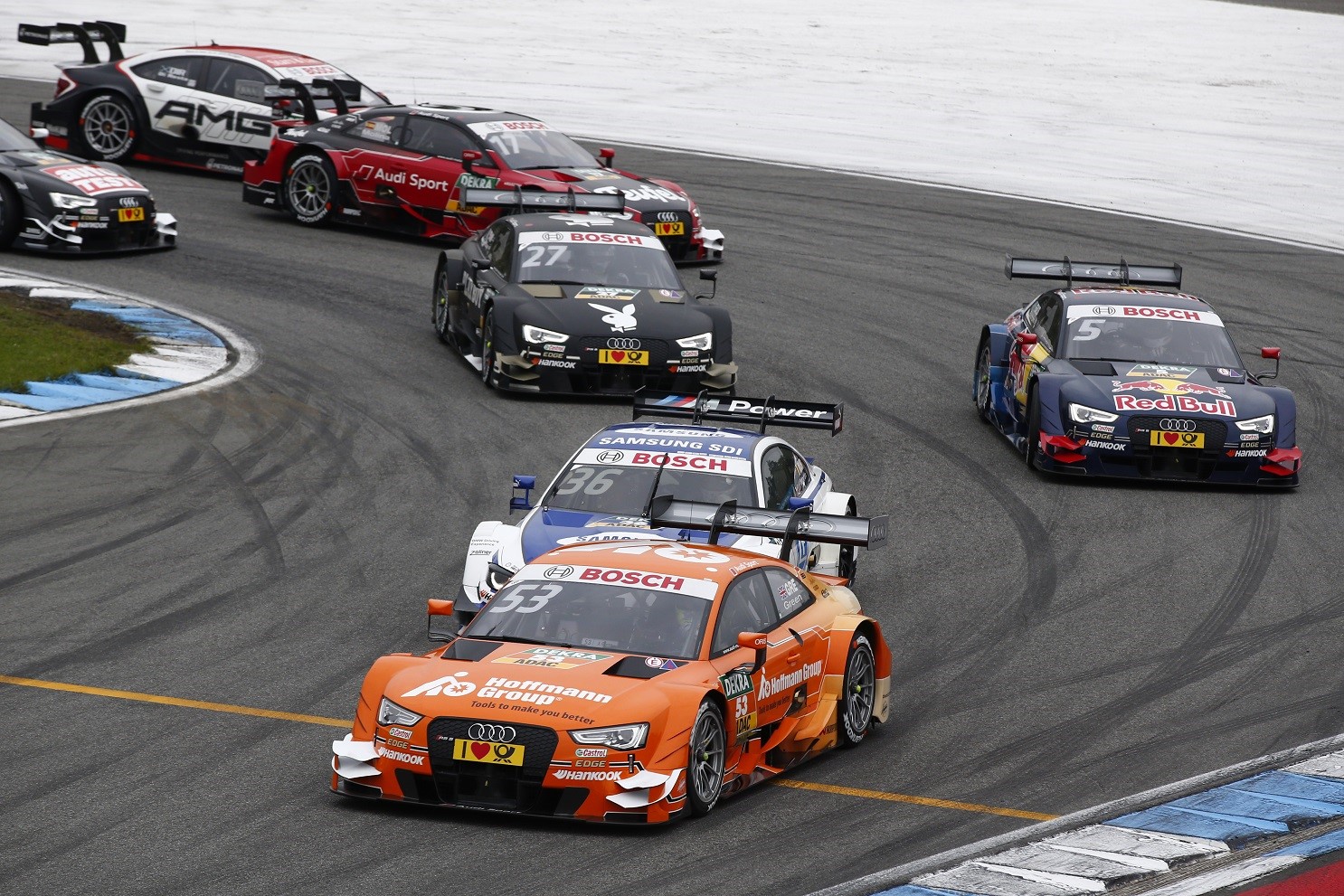 The Hockenheimring Baden-Wurttemberg seems to suit Jamie Green: in the DTM finale at the Motodrom, the Brit ended the season just like he had started it back in May: with a race win, his fourth of this year. The Audi driver dominated proceedings in the 18th DTM race of the season and after 39 laps, he crossed the finish line as the dominant winner, accompanied by the traditional fireworks display.

"After the problems I had this season, driving up front today and to win was a sheer pleasure," Green said. With the twelfth win of his DTM career, Green also secured runner-up spot in the final drivers' standings. "Generally, I am happy with the season, this way my best year in the DTM and I am looking forward to the future." Behind him, Mattias Ekstrom and Edoardo Mortara completed the successful Sunday for Audi by finishing second and third respectively. In total, 135,000 enthusiastic motorsport fans attended the DTM weekend at Hockenheim.

Out in front, Jamie Green drove an almost solitary race. Behind the winner, many thrilling duels provided plenty of action: next to Edoardo Mortara, who had started the race from 13th place on the grid and was able to finish on the podium, Paul Di Resta also made up numerous positions. The Scot, who finished fourth in the race as the best-placed Mercedes-Benz driver, worked his way up from eleventh place on the grid. Bruno Spengler even managed to make up twelve positions in the race: the BMW driver made progress from 19th on the grid to finish seventh.

While champagne was sprayed at Mercedes-Benz for the newly-crowned DTM champion Pascal Wehrlein on Saturday already, BMW decided the battle for the manufacturers' crown in its favor in the final stages. Maxime Martin, Antonio Felix da Costa and Bruno Spengler in sixth to eighth place and Martin Tomczyk in tenth position scored the decisive points that allowed the brand from Munich to win the manufacturers' title.

BMW won with 602 points from Audi (595 points) and Mercedes-Benz (534 points). And even though Pascal Wehrlein didn't score any points in his first race as the new DTM champion – the 21-year-old finished in 20th place – his team gooix/Original Teile Mercedes-AMG had a sufficient advantage in the teams' standings to secure the title with a total of 225 points. "Winning the drivers' title is the biggest success in my career in motorsport," Wehrlein said.

"I will never forget this title all my life, this is a very special moment. That Christian (Vietoris) and I now also won the teams' title, is simply great. Tonight, it's party time!" BMW Team RMG ends up second with 206 points from Audi Sport Team Abt Sportsline (201 points).

The changes in the regulations for the 2015 DTM season have resulted into plenty of variety in the races. The 18 races produced 13 different winners and the battle for the DTM drivers' title was only decided during the final race weekend of the season. Prior to the season finale, four drivers still had mathematical chances of becoming champion. There was also plenty of variety in the pole positions: 14 different drivers claimed the best starting grid positions at least once.