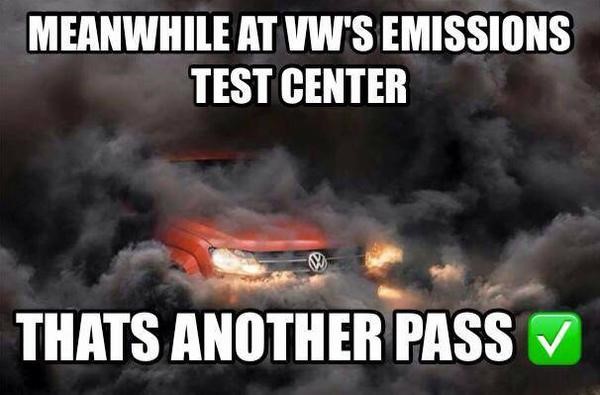 Reports are that 2.1 million Audis and 2.8 million VWs in Europe alone have the diesel emission cheating software. A worldwide total has yet to be announced. The image to the right shows the VW emission test facility.

09/23/15 The Diesel Technology Forum issued the following statement regarding clean diesel vehicles in the U.S.

The Diesel Technology Forum does not comment on specific cases or circumstances involving individual companies and enforcement actions by the government. However, to the extent that these circumstances have raised questions about diesel technology in general, we offer the following:

The circumstances involving a single manufacturer do not define an entire technology, or an industry. Vehicle manufacturers and engine makers have invested billions of dollars in research and development to successfully meet the most aggressive emissions standards in the world. They continue to work closely and cooperatively with the Environmental Protection Agency, California Air Resources Board, international regulatory bodies, as well as environmental and other interest groups toward common goals.

Nothing has changed the fact that the diesel engine is the most energy efficient internal combustion engine. It is a proven technology and its unique combination of efficiency, power, reliability, performance, low-emissions and suitability for using renewable fuels ensures a place for diesel technology to help meet the demands of a global economy.

We are also confident that consumers will continue to find the new generation of clean diesel cars, trucks and SUVs as a competitive choice to meet their personal transportation needs.

Finally, it is important to focus forward on the significant accomplishments of an entire industry that developed and refined clean diesel technology to what it is today – a key strategy in achieving current and future energy and climate goals.

"I am doing this in the interests of the company even though I am not aware of any wrongdoing on my part," Winterkorn said after an emergency meeting with Volkswagen directors.

Winterkorn, 68, was Volkswagen CEO for eight years. The German company, which also owns the Audi and Porsche brands, had just achieved his long-standing goal of overtaking Toyota (TM) to become the biggest automaker three years ahead of target.

But his position had looked increasingly precarious since the scandal broke Friday, when U.S. regulators said the company had deliberately programmed some 500,000 diesel-powered vehicles to emit lower levels of harmful gases in official tests than on the roads.

Winterkorn, an engineer and former head of Audi, said he was stunned by the scale of the misconduct, and was accepting responsibility to clear the way for a "fresh start" for the company.

"The process of clarification and transparency must continue. This is the only way to win back trust. I am convinced that the Volkswagen Group and its team will overcome this grave crisis."