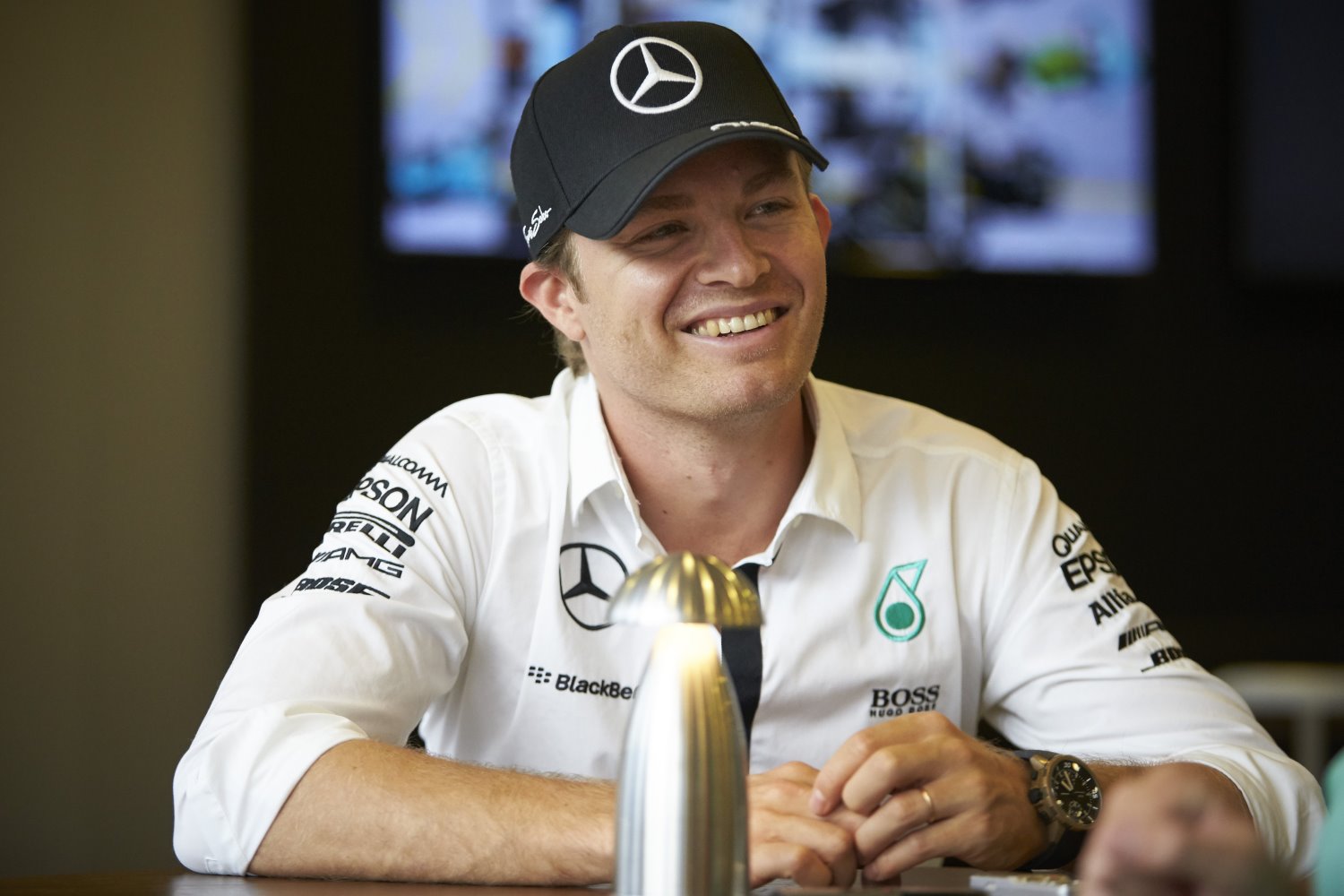 That is despite the fact that Rosberg's retirement at Monza leaves him a whopping 53 points behind, which in the past might have been enough for a team to conclude that a clear championship pecking-order should be imposed.

"No," Wolff told Speed Week, "there are still seven races left and 175 points still to give out. So nothing is decided yet."

Indeed, while downbeat after Monza, Rosberg said he is not giving up.

"I know I need a small formula one miracle if the championship is still going to work out for me," he wrote in his latest column for Bild newspaper.

"But my fighting spirit is still alive. 'Give up' is not in my vocabulary. I still believe that I can be world champion," Rosberg added.

So Wolff said the pair will be left alone to fight, even though the chasing Ferrari of Sebastian Vettel is ready to pounce.

"We will let them fight, just as we always have done," he insisted.

Both David Coulthard and Mark Webber have been at championship-winning teams as their respective teammates consistently dominated.

"My weakest year was the year after (Sebastian Vettel's first championship) and Nico is going through that now," former Red Bull driver Webber told BBC radio.

And Coulthard said he can also relate to Rosberg's plight, having often struggled during his McLaren years to match Mika Hakkinen.

"I know what it is to be alongside a driver who fundamentally is just that bit faster," he said.

"You don't give up and say 'Oh, he's better than me.'. You keep digging deep, and keep thinking of ways to win. You keep believing.

"But Rosberg has not been the equal of Hamilton this year, and he knows that," Coulthard added.

La Repubblica newspaper claims the F1 technology, worth some EUR 100,000, was taken overnight between Saturday and Sunday in a garage corridor reserved for the Silverstone based team.

"Force India made a complaint to the police", the Italian report said.

Legal battles loom on F1 sidelines
(GMM) Two legal battles are threatening to break out behind the scenes close to the world of formula one.

Mark Sutton, a renowned F1 photographer, is furious that without seeking permission, Lewis Hamilton used a photo of him doing a burnout on a motorbike whilst leaving Monza on Sunday for his Instagram account.

"The cheek, nerve and blatant misuse of copyright … and intellectual property!" Sutton said on Facebook. "Any lawyers out there who understand breach of intellectual copyright, let me know!"

And a regular spat between the Jean Todt-led FIA and former F1 doctor Gary Hartstein is also still raging, after Hartstein suggested officials of the governing body might be liable for the death of Jules Bianchi.

Hartstein's latest comments earned him a letter from an FIA lawyer, who accused the American of posting "defamatory remarks" with the "sole objective of harming the FIA and its leadership in your quest for personal vindication and publicity".

The letter was revealed online by Hartstein, who also published a copy of his reply to the FIA's lawyer.

"When writing," he wrote to the lawyer, "I am always scrupulously careful to verify my facts, and to present that which is not factual as not being factual."

Financially-crippled Lotus headed straight from Monza to the London high court, where the British tax authorities pressed for the Enstone team to be put into administration.

The case, surrounding an unpaid tax bill, was adjourned until September 18 — the day of Friday practice ahead of the forthcoming Singapore grand prix.

"It appears Lotus were saved for now by representatives of Renault at the hearing," said Telegraph correspondent Daniel Johnson.

A deal between Lotus and Renault, however, still has not been done.

Germany's Auto Motor und Sport said the reason for the delay is because Renault wants to pay Lotus by using extra funds that would be assigned by Bernie Ecclestone to give the new factory team the same 'special status' as enjoyed by Ferrari, Mercedes and other grandees.

"The biggest obstacle is written confirmation (of the status) from Ecclestone to (Renault president) Carlos Ghosn," said correspondent Michael Schmidt.

"Ecclestone has promised it verbally to Ghosn that the world titles of 2005 and 2006 will put Renault among the factory teams," he added.

Until the Renault deal is done, Lotus is basically financially crippled, with an unnamed team member saying the next races in Singapore and Japan "will be critical".

The situation is apparently making team driver Romain Grosjean nervous, as the Swiss newspaper Blick reports that the Frenchman may have been targeted by the new American outfit Haas.

At Monza, while Felipe Massa and Valtteri Bottas battled hard to the line for third and fourth, Ferrari's Sebastian Vettel finished a full 22 seconds clear of the pair.

"Ferrari has a very big budget; much bigger than ours," Symonds told Brazil's Globo.

"They made a huge investment to make a better chassis but especially a better power unit, which was their biggest problem in 2014," he added.

Brazilian Massa agrees, saying Ferrari's latest engine upgrade was obviously better as it made its debut at Monza.

"Now it's as competitive as our Mercedes (engine)," he said. "And on a track like Monza the engine makes a tremendous difference.

"Each race gets harder for us, as they continue to improve their car," added Massa.

Monza should be 'untouchable' – Hamilton
(GMM) Sunday's checkered flag has already waved, Monza is firmly on the 2016 calendar, but the future of the historic and popular Italian grand prix is still making news.

That is because figures both inside and outside of the paddock can barely imagine an F1 beyond 2016 without the Autodromo Nazionale, and the passions it inspires.

And yet Bernie Ecclestone had departed Monza warning that a deal beyond 2016 is now "unlikely".

The reigning Monza winner, Lewis Hamilton, attended a sponsor event in Milan on Monday, with the Tuttosport newspaper quoting him as saying Monza's place on the calendar should be "untouchable".

"You see Ferrari flowing through the veins of the fans. It's like their DNA. It's like they're born with the red shirt, like Superman and his suit," the Mercedes driver added.

"Monza cannot be touched," Hamilton said. "It is important to keep the historic races, as where there is history, there is passion."

So after weeks and more of petitions and pleas, F1 supremo Ecclestone appears now to have softened his stance regarding Monza.

Italy's Sky quotes him as saying: "I'm sure we will do something."

Ecclestone's confidante and friend Flavio Briatore has a similar message, although he warns that it is still up to the race organizers to agree a deal with the supremo.

But Briatore said: "Bernie knows the importance of Monza. My feeling is that the grand prix will stay here for years.

"There are these historical races to maintain, even if they are worth less than the others. History is important for formula one, and I think Monza has more appeal than Malaysia," the former Renault boss added.

F1 revs up borrowing to hand $1bn prize to shareholders
The owners of Formula One have completed a refinancing that has paved the way for a large dividend payout to the company's shareholders.

Last year, F1's bank borrowings accelerated by $2bn (Â£1.3bn), half of which went to investors. CVC, the private equity firm, received $350m in line with its 35pc stake.

The payout followed a strong year for the sport, with pre-tax profits up more than a third from $284.6m to $394.1m, and revenue clocking up a 3.2pc rise to a record $1.8bn, according to its latest accounts.

The improved financial performance came after F1 supremo Bernie Ecclestone established new races in Russia and Austria. The sport returned to Austria after an 11-year hiatus, while Russia joined the season with a grand prix in the Olympic resort of Sochi.

Mr. Ecclestone has taken the sport to emerging markets, where it is promoted to hundreds of millions of television viewers in an attempt to drive tourism. As the F1 calendar is limited to just over 20 races, it puts a premium on the race slots and has fueled an arms race in the amount countries are prepared to pay.

Together Austria and Russia pay an estimated $62m in annual hosting fees, outstripping the $46m paid by India and South Korea.

The jump in profits and sales is likely to help improve F1's appeal to suitors, including Qatar's sovereign wealth fund and RSE ventures, owner of the Miami Dolphins NFL team. The duo is understood to have made an approach to buy a controlling stake this year.

Mr. Ecclestone's strategy will see F1 return to Mexico in November and the addition of a grand prix in oil-rich Azerbaijan next year to give a record 21 races. Together, fees from race hosting and broadcasting made up $1.2bn of F1's total revenue with a further $161m from television production as well as travel and freight services to the teams.

Revenue from the sale of tickets to F1's corporate hospitality outfit, the Paddock Club, grew 4.9pc to $110.9m last year. It attracts some of the world's wealthiest people. Recent guests have included Michael Douglas, the Hollywood actor, George Lucas, the director, and Mexican billionaire Carlos Slim.

Growth last year was driven by increased corporate demand at the new races. Advertising and sponsorship received a similar boost. F1's portfolio of partners includes Rolex and the Emirates airline.

The teams are among the biggest beneficiaries, as their prize money comprises 63pc of the sport's earnings before interest, tax, depreciation and amortization (EBITDA). F1's total costs increased by 5.2pc to $1.2bn last year, while EBITDA and prize money rose 8.2pc to $863.1m. In turn operating profits fell 2.4pc to $519.8m.

CVC has made $4.4bn from dividends and selling down its stake in F1 since it took over the sport in a leveraged buy-out in 2005. Its remaining stake is understood to be worth $7bn to $8bn and has a premium attached to it as it controls the voting rights. Telegraph