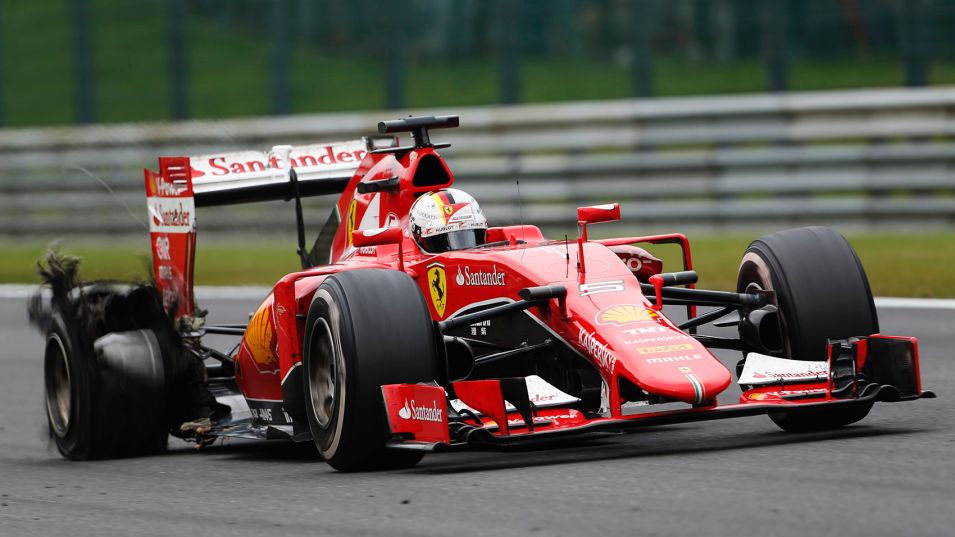 But after the latest incident in IndyCar involving the death of former F1 driver Justin Wilson, the FIA race director admitted formula one must also continue to work on better protecting the drivers' heads.

In the case of Wilson's death, he was hit by the nose-cone structure of a crashed rival's car, raising questions about whether the same could happen in F1.

"We don't know whether our noses are secured better or worse than in IndyCar," Whiting told Germany's Auto Motor und Sport, "but I can say that our testing is very strict.

"In any case, we will speak with our counterparts from the IndyCar series to see if we can learn something from this horrible accident," he said.

In the wake of the Wilson tragedy, the FIA has already committed to re-commencing tests on a couple of cockpit protection concepts, including a sort of 'halo' structure that was devised by Mercedes.

As for an entirely closed cockpit, Whiting said: "I don't think this (Wilson) accident will change our minds in terms of closed cockpits.

"We believe that the disadvantages outweigh the benefits," he added.

"Nevertheless, we will continue our efforts to find a way to deflect flying debris away from the cockpit, but this is anything but an easy task."

Whiting said the results of next month's testing will be presented in early October.

McLaren not best car on 2015 grid – Honda
(GMM) Honda insists it is not solely to blame for McLaren's woeful 2015 season.

With the MP4-30 raced by champions Fernando Alonso and Jenson Button still seriously off the pace, most fingers of blame have been consistently pointed at Honda, the obviously-struggling Japanese engine maker that returned to F1 this year.

But Yasuhisa Arai, Honda's under-fire F1 chief, insists: "The (McLaren) car does not have the best mechanical and aerodynamic grip.

"Compared to Red Bull there is still a big difference," he is quoted by Spain's El Confidencial, referring to data obtained by GPS.

McLaren has been piling the pressure on Honda to improve, but even team boss Eric Boullier admits the MP4-30 chassis is not perfect.

"To be fair to Honda," he said, "our chassis is better than last year's, but not the best in the pitlane.

"Our car is quite 'draggy'," Boullier reportedly admitted, "we still have to improve things here and there."

And Alonso is quoted as saying: "We are trying to improve performance.

"We are not good enough in power or aerodynamic and mechanical grip, so there are still many things to put in place to be competitive and win championships."

Hamilton not excited to secure pole trophy
(GMM) With eight races still to run in 2015, Lewis Hamilton already has his hands on one prize.

It is the new pole position trophy, awarded to the driver with the most poles each season.

The new measure was introduced for 2014, with the regulations now demanding that a "trophy will be awarded to the driver who sets the most pole positions" each season.

Last year, the winner was Hamilton's Mercedes teammate Nico Rosberg, although the German warned his British colleague not to get too excited after clinching it in Belgium.

"I never got my trophy for last year," Rosberg told Hamilton, "so don't expect a trophy coming your way for that."

"The pole trophy is not particularly exciting," he said. "Winning the world championship is the goal, but getting poles is definitely a great thing.

"I would give up everything else – all the poles, the pole trophy – for the world championship but I'm really happy with how qualifying has gone this year," said Hamilton. "It's been a huge step."

Team boss Toto Wolff admits that qualifying is a big reason for Hamilton's success in 2015.

"You do half the job on a Saturday," he is quoted by Italy's Autosprint, explaining that controlling the race from the front is particularly crucial this year.

Poles or not, however, team chairman and F1 legend Niki Lauda thinks Hamilton is simply "unbeatable" at present.

"Nico is fighting like crazy," he said, "but Lewis raised his game. I think he was unbeatable, especially at Spa.

"If Lewis does not do a mistake in the next couple of races it will be hard for Nico" to win the title, Lauda added.

Hakkinen can understand Vettel outburst
(GMM) Mika Hakkinen says he can understand Sebastian Vettel's outburst in the wake of the Belgian grand prix.

The Ferrari driver's expletive-filled rant about the safety and quality of official tire supplier Pirelli's product in 2015 has been criticized by some, including F1 legend Niki Lauda and Eddie Jordan.

But former double world champion Hakkinen said: "I can understand that a driver will react like that in such a situation — particularly at Spa where it is really fast and a puncture is always dangerous.

"80 per cent of the performance of a driver is his mental strength," the Finn said in his latest interview with the sponsor Hermes, "so if this happens, and your self-confidence begins to falter, so too do your lap times.

"I remember practicing in 1997, I came out of Eau Rouge and onto the Kemmel straight and suddenly the suspension failed at about 330kph. Until that happens at such a speed, you can forget how fast you are going," added Hakkinen.

It is understood that Pirelli is still analyzing the exact cause of Vettel's blowout, with the marque's leading theory being that Ferrari pushed the limits too far in terms of tire life.

"It is true that the cause of the problem is not fully understood, and it is a cause for concern," FIA spokesman Matteo Bonciani told Auto Motor und Sport.

"We are in constant contact with Ferrari and Pirelli to find out what happened and, if necessary, to agree upon countermeasures."

Bonciani admitted that it is possible the FIA will react by agreeing to Pirelli's proposal that a maximum tire life per set be imposed in future, among some other new measures.

"Yes," he confirmed, "if our joint analysis shows that this would help."

After fans decried the grid penalties that spilled into in-race penalties for cars falling foul of the long-life engine rules this year, the FIA agreed to a tweak.

For McLaren-Honda at Spa, it meant the team could rack up penalties totaling an incredible 100-plus grid demotions for changing engines throughout the weekend, but never fall lower than last place on the grid.

Team managing director Jonathan Neale said it was a "strategy to get more engines in the pool to give us a clearer run" into the second half of the season.

But when asked if McLaren had abused the new rule, F1 race director Whiting told Auto Motor und Sport: "The FIA had expressed these concerns to the strategy group.

"However, we had the feeling that the negative comments from almost all parties concerning the penalty system with additional penalties in the race was harming the sport even more.

"Of course," he added, "the rule was written in good faith, not to give the incentive to do what Honda did."

Toyota, Bell Helmets among Lotus creditors
(GMM) Charles Pic is not the only creditor at embattled Lotus, it has emerged.

Prior to the black and gold cars being impounded by court bailiffs at Spa-Francorchamps, the Enstone team was already running into financial trouble.

Xtrac, a transmission specialist, had filed a 'winding up' petition in the British high court, while Pirelli had threatened not to release tires due to an unpaid bill.

The problems then came to a head in Belgium, when disgruntled former reserve driver Charles Pic pressed his claim for $800,000 that was enforced when bailiffs entered the paddock and seized Lotus' race equipment.

Italy's La Gazzetta dello Sport reports that Lotus has now returned to its UK headquarters, with a "compromise" reached between team lawyers and creditors.

Pic is not the only one claiming unpaid bills, correspondent Luigi Perna said.

The others are "Toyota for the use of the motor home" and "Bell for the helmets", with Perna adding that the disagreements are "not yet completely resolved".

Mercedes working on race start solution
(GMM) Mercedes is working on changes to its clutch system, following a series of bad race starts.

At the last four races, and despite their otherwise dominant form, Lewis Hamilton or Nico Rosberg have often struggled to get off the line efficiently.

Boss Toto Wolff has declared the technology problems "unacceptable" as they date back now to Austria and into the FIA's new race-start clampdown era in Belgium last weekend.

Rosberg got a particularly bad start at Spa-Francorchamps, but he admitted he "messed up".

"It was also because we did another formation lap," he explained, "and that puts more temperature into everything and then things change."

So with the new rules now in place for the last eight races of 2015, Mercedes is reportedly working on a solution.

But it reportedly will not be ready until Singapore late next month.

"At Spa and Monza we can live with a bad start, because it is possible to overtake," the engineer added. "But for Singapore we need a solution."