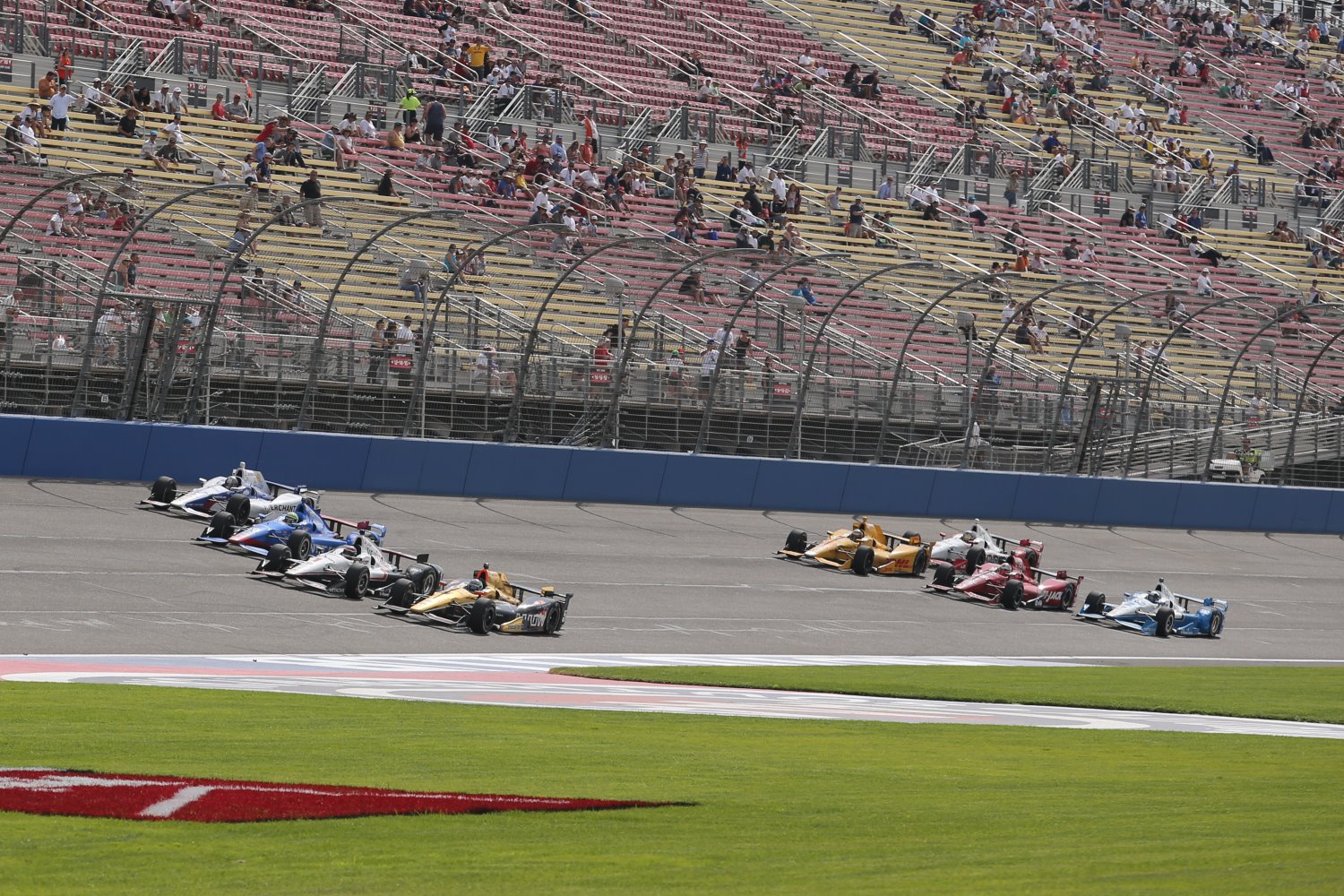 [Editor's Note: After seeing IndyCar put on the greatest race in the history of motorsports at Fontana 4 weeks ago in a demonstration of 'pack' racing done right] NASCAR chairman Brian France's pleas for more pack racing in the Sprint Cup Series has been met by resistance this week from drivers unconvinced it’s feasible.

After winning the pole position for the 5-hour Energy 301 at New Hampshire Motor Speedway, Carl Edwards said NASCAR should limit the practice of bunching cars together in tight groups to its twice annual visits to Daytona International Speedway and Talladega Superspeedway.

But the Joe Gibbs Racing driver also posited that it wouldn’t be possible to engineer such racing at a 1.5-mile oval such as Kentucky Speedway, where a lower-downforce rules package made its debut last Saturday and produced a dramatic rise in green-flag passing and raves from many drivers, including Edwards.

"As far as the physics of being able to have stock car racing like that and to have pack race or drafting, I don’t think that’s possible," Edwards said. “ I think they’re two completely different things. I think we have plenty of pack racing in this sport with the four races (at Daytona and Talladega). I think we should stay as far away from that at the other tracks as possible.

“But NASCAR is not going to make changes based on one driver’s opinion or three or four driver’s opinions. I think Brian France made that clear. But I want to be very clear that I don’t prefer a style of racing, I prefer stock-car racing where you slide cars around and you can race close to one another. The coolest thing is that NASCAR is trying all these things."

In a Monday interview on SiriusXM Satellite Radio’s NASCAR channel, France said there “were a lot of things we liked" about the Kentucky race but lamented the lack of drafting and pack racing.

NASCAR will roll out a high-drag package next week at Indianapolis Motor Speedway that also will be employed next month at Michigan International Speedway. The objective of the change is the same as Kentucky – enhance the ability to pass – but it’s achieved in a different manner.
At Kentucky, the reduction in downforce was intended to make cars more ill-handling and lessen the importance of aerodynamics that often gives the lead car an inherent advantage over the trailing car. At Indy and Michigan, a 9-inch spoiler will increase drag in the hopes of punching a larger hole through the air on the straightaways that theoretically would increase the closing rates of a trailing car and engender the likelihood of more “slingshot" drafting.

During a break from a three-day test at Chicagoland Speedway, Dale Earnhardt Jr. said Wednesday that he like the high-drag concept but was skeptical about France’s desire for more drafting and pack racing across the board.

“Yeah, I was surprised by some of his comments about drafting, in particular," Earnhardt said. “I mean, you’re not going to see drafting at Kentucky, I don’t care what you do. I don’t know how in the heck we’re going to try and accomplish that, if that’s what they’re looking for.
“I thought the racing was good, the fans like it, and I think we had more passing. … You’re not going to draft (at Kentucky). That place is wore out. It’s rough as hell down the straightaways. You ain’t going to draft. You’re going to pass in the corners, you’re going to chase guys around in the corners and get out of shape and beat around each other in the corner and race hard like we did."

But he understands that NASCAR will “try other packages. That’s a scientific method and whatever turns out to be the best direction, hopefully they go all the way down that path and go that direction and let it rip.

“The one thing that I’m very impressed with Brian France and everyone involved is that they’re willing to try things, they’re willing to make changes. They want the exact same thing that the drivers want and the fans want, they just want this to be the greatest sport on earth and to have the most fun watching it and doing it and have it be competitive. I think with that in mind, regardless of everyone’s opinions, if you try a bunch of different things, you pick the best one and move forward or pick a mix of things. I really applaud NASCAR for doing that."

Edwards, though, cautioned that the subjective nature of evaluating racing makes it difficult to land on a universally commendable direction.
“The way a race looks and the way a race is are two completely different things," he said. “You can just leave the pace car out there and we can all sit in line nose to tail, and that’s a pretty good picture, but it’s not a race.

“A stock car race is guys taking cars that are not meant to go that fast, they’re not aerodynamic devices, they’re just cars that go race on pavement, and they can race close and guys have to manage the cars because they’re heavy and they’re powerful. That’s a race. I think it’s a very fine line that NASCAR has to walk on between putting on the best competition, which is one thing, and putting on the show that looks the best, which is another. I think there’s less substance (in the latter)." Nate Ryan/NBC Sports