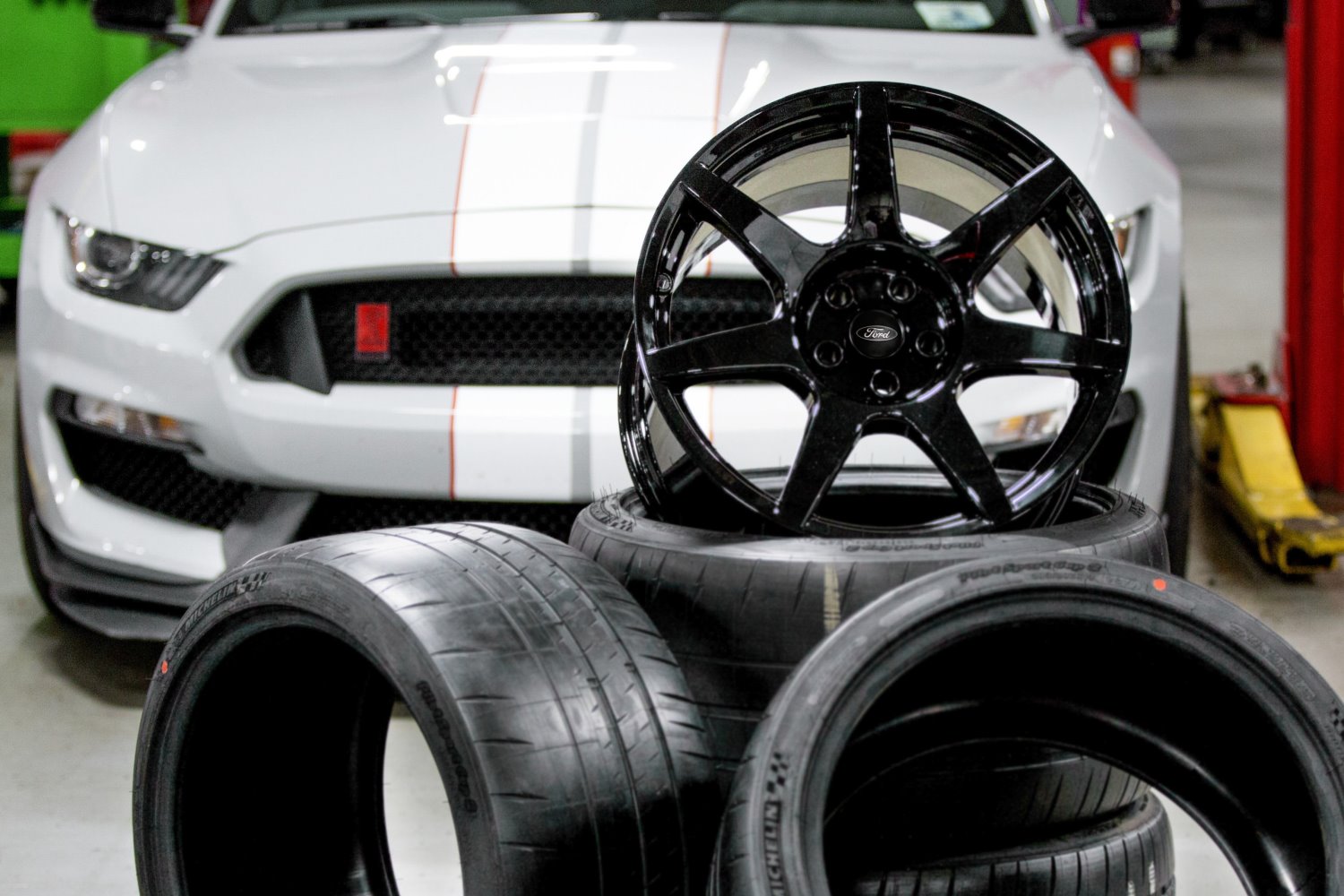 With a little help from Space Shuttle technology, Ford helped reinvent the wheel.

For the all-new Shelby GT350R, the most track-ready road-going production Mustang ever, Ford dreamed of using the ultimate high-performance material for its unique wheels – carbon fiber.

But while the automotive aftermarket and a low-volume supercar manufacturer have offered carbon fiber wheels, Ford and Australian supplier Carbon Revolution took on the challenge of crafting the first mass-produced, track-capable carbon fiber wheels as standard equipment for Shelby GT350R.

In early testing with benchmark vehicles, prototype wheels showed significant potential – improving suspension response times, chassis dynamics, steering feel and ride quality. When the decision was made to pursue this technology for use in a production vehicle, the engineering team was challenged to develop a wheel that met Ford’s strict standards for durability, quality, craftsmanship and premium finish.

Lowering overall curb weight in general is beneficial to a car’s dynamics, but a reduction in unsprung weight (those components not supported by the suspension) can have a significant impact on handling and performance. Less unsprung weight helps vehicles start, stop and turn faster by reducing wheel rotational inertia, dramatically improving response time to driver input. Lower unsprung weight also translates to suspension components not having to work so hard to keep the tires in contact with the road over undulating or broken surfaces.

Developing new benchmarks
Although Carbon Revolution has been the leading manufacturer of carbon fiber wheels, both Ford and the supplier recognized significant innovation was needed to meet Shelby GT350R program needs. This project would set the standard for mass-produced carbon fiber wheels.

Ford sets extremely high testing requirements for its wheels. Ford wheels must endure tests that include curb strikes, UV and chemical exposure, and extreme heat durability testing. The GT350R wheels would need to fulfill all of these demands in order to proceed to production.

A common misconception of carbon fiber is that while it’s strong, it’s also a brittle material. Some formulations may have this characteristic, but carbon fiber’s durability is a feature of the type of resin and design intent of the part. The wheels of Shelby GT350R are designed to be stiff, light and resilient.

One of the most severe tests for wheels in the Ford development process involves striking a curb at speed – a test that, without proper design, can cause serious wheel and tire damage. Because of the light weight, advanced construction methods and resins in the wheels, along with the highly-developed MagneRide dampers, the suspension was able to react so fast that the driver wasn’t sure the test had been carried out correctly and ran it twice to be sure. The suspension response was fast enough to greatly diminished the severity of the impact – that’s the power of minimizing unsprung weight.

During track testing the extreme performance capabilities of the braking system developed heat which required the maximum technology available from Carbon Revolution. When brake temperature measurements were taken, it was revealed Shelby GT350R’s ultra-powerful brakes were creating rotor temperatures in excess of 900 degrees Celsius. As a result, the wheel design was elevated from a road car specification to a thermal standard more suitable for motorsports.

Created specifically for motorsport and aerospace applications where extreme temperature conditions are encountered, Carbon Revolution’s thermal barrier coating system uses a multistage, multimaterial coating formulation that provides an excellent thermal barrier. Using a plasma arc gun to liquefy a ceramic material, the wheels are coated at critical points around the inner wheel “barrel" and on the back of the spokes. The result is an incredibly thin, nearly diamond-hard coating that reliably shields the resin from heat – reducing maximum wheel temperatures and allowing continuous track use by even the most aggressive drivers.

But that’s not the end of the story with regard to testing. Upon extreme exposure to harsh UV environments, corrosive salts and road chemicals, it became apparent that to achieve the durability required by Ford, a special coating would need to be developed to protect the resin from the environment.

Carbon fiber parts are notoriously challenging when it comes to delivering a flawlessly smooth painted surface – the kind of finish Ford demands for all of its vehicles. Several proprietary new processes were developed that resulted in a robust, high-gloss black finish that not only looks good, but ensures a long life for the wheels.

Produced to high standards – tested to ensure quality
Manufacturing carbon fiber wheels begins with the creation of the preformed internal carbon structure, composed of precisely manufactured carbon strands arrayed into woven fabrics. The elements are then placed into a mold using state of the art manufacturing techniques.

An RFID chip with a unique tracking number is embedded in this structure, and each wheel is individually entered into a quality assurance system. Once this structure is assembled, it’s infused with resin and cured at high temperatures.

This process results in a one-piece wheel that ensures maximum strength – eliminating the need to bond or glue the wheel’s spokes and barrel components together.

As the wheel cures, 61 individual checks and more than 246,000 data points are logged before it’s released from the machine. To guarantee quality parts, the cured wheels are analyzed using a 3D computerized tomography (CT) imaging process in which more than 18,000 X-ray images are taken. If the wheel passes inspection, it undergoes machining for the valve stem and mounting hardware holes before it gets painted, coated, assembled, dimensionally checked and shipped to Flat Rock Assembly Plant for installation on a new Shelby GT350R Mustang.

Superior performance
That the new Ford Shelby GT350R Mustang will be rocketship-fast should come as no surprise, but by cutting the weight of each wheel nearly in half compared to an equivalent aluminum wheel (18 pounds versus 33 pounds), handling and acceleration performance see serious benefits. The wheels also provide a reduction in rotational inertia of more than 40 percent, which positively impacts acceleration and braking performance. The wheels are so light, the springs and MagneRide dampers had to be recalibrated because the suspension can respond considerably faster to road inputs.

“The GT350R wheels and tires were developed to be the most track-capable parts we’ve ever produced," said Adam Wirth, chassis supervisor, Ford Performance. “The carbon fiber wheels reduce vehicle weight by 60 pounds compared to aluminum, yet are stiffer for better steering response.

“We believe this is a game changer for the industry," he added, “a great example of improved performance through innovation."