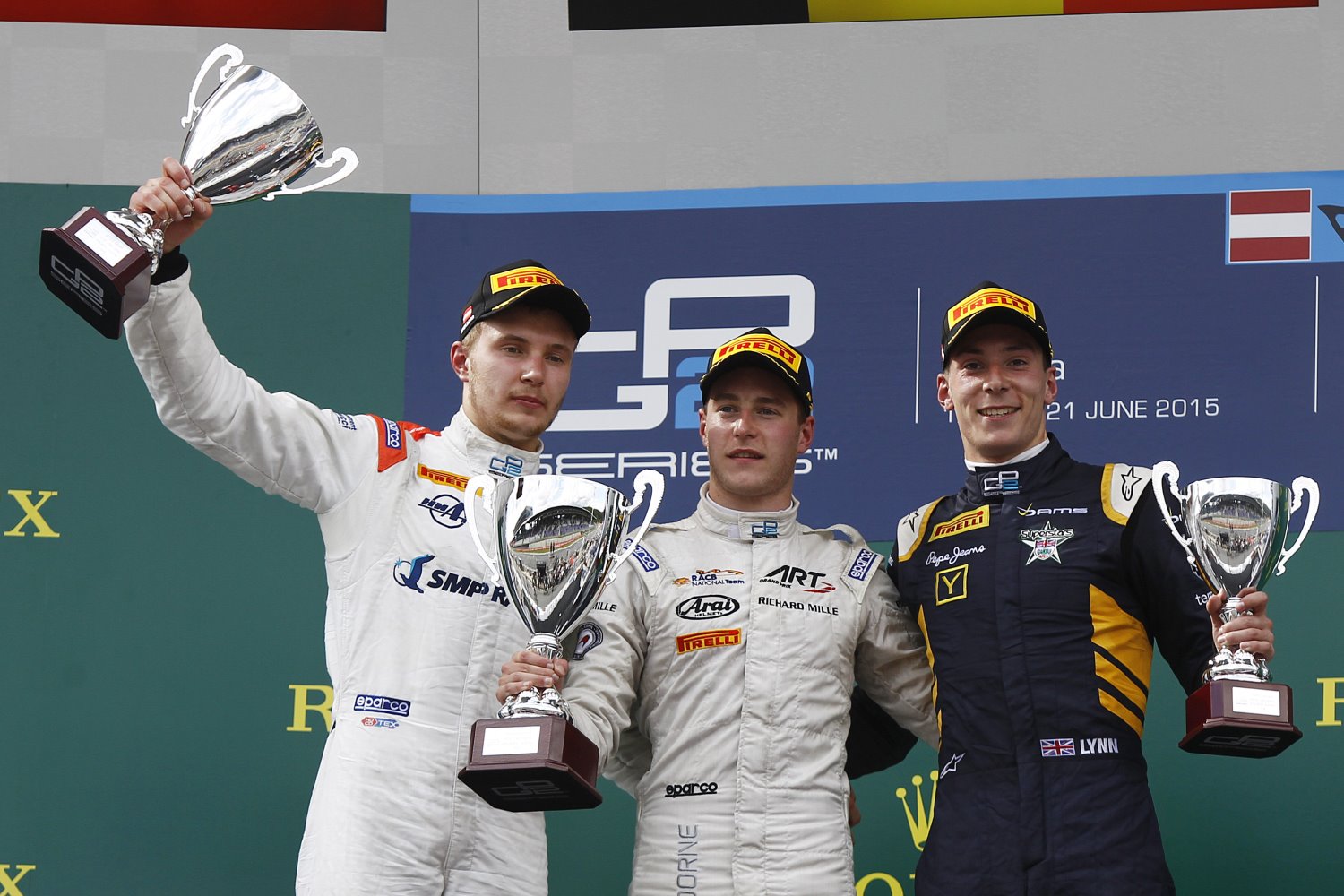 Stoffel Vandoorne continued his domination of feature races this year with a crushing performance in this afternoon’s race in Austria, locking out the top spot once again as he has done each time out since Abu Dhabi last year, despite the best efforts today of podium finishers Sergey Sirotkin and Alex Lynn.

Once again the win was set up at the start, with the McLaren test driver starting from pole for the fourth time this year and denying a fast starting Sirotkin into turn one, with teammate and fellow front row starter Nobuharu Matsushita slow off the line but holding off Raffaele Marciello, Nick Yelloly and Rio Haryanto, while behind him Williams test driver Lynn lost 3 spots at the start but picked them all back up again before the end of the first lap.

A brief VSC delayed the field next time through, but the top four were soon putting in quick laps as they looked to use up their soft tires before their early stops: Vandoorne, Yelloly and Arthur Pic were in on lap 7, with the Belgian slightly delayed with a sticking left rear, while Sirotkin, Matsushita and Alexander Rossi were in a lap later. All eyes were now on the gap between the Belgian and Pierre Gasly, who assumed the lead by being at the front of the harder tire drivers.

The battle at the front between the DAMS teammates was set up when Lynn disposed of Haryanto for P2 on lap 11, and was eventually resolved in Lynn’s favor as he sliced inside Red Bull tester Gasly 7 laps later, much to the advantage of Vandoorne, who chipped away at the time gap in clear air with Sirotkin, Rossi and Matsushita trying (and failing) to stay on pace in the Belgian’s wake.

When Lynn was finally in clear air he and Vandoorne swapped fastest laps between them for the middle section of the race: both men knew the battle was on the clock rather than the road and neither was willing to concede ground, but at the laps rolled down tire wear was favoring the Belgian as the gap trickled down ahead of the Englishman’s stop on lap 32, who emerged into the Rossi/Matsushita battle.

Lynn made short work of them both on fresh softs, but with the laps running out Vandoorne was in the pound seat, still able to fight with Lynn for fastest lap almost to the end of the race. The Belgian punched the air with delight as he claimed the checkered flag, almost 12 seconds to the good over a delighted Sirotkin (who claimed his best GP2 finish) and Lynn, who fought up to the podium from P9 on the grid on the opposite strategy.

Matsushita and Artem Markelov took advantage of a slow puncture late in the race for Alexander Rossi, with the Russian also claiming his best finish so far in the series, while Haryanto held off Yelloly for P7, ahead of Pic and Mitch Evans. Vandoorne stretched his lead in the drivers’ title fight over Rossi, 143 points to 78, ahead of Haryanto on 55 points, Lynn on 42 and Sirotkin on 38 points ahead of tomorrow’s sprint race.