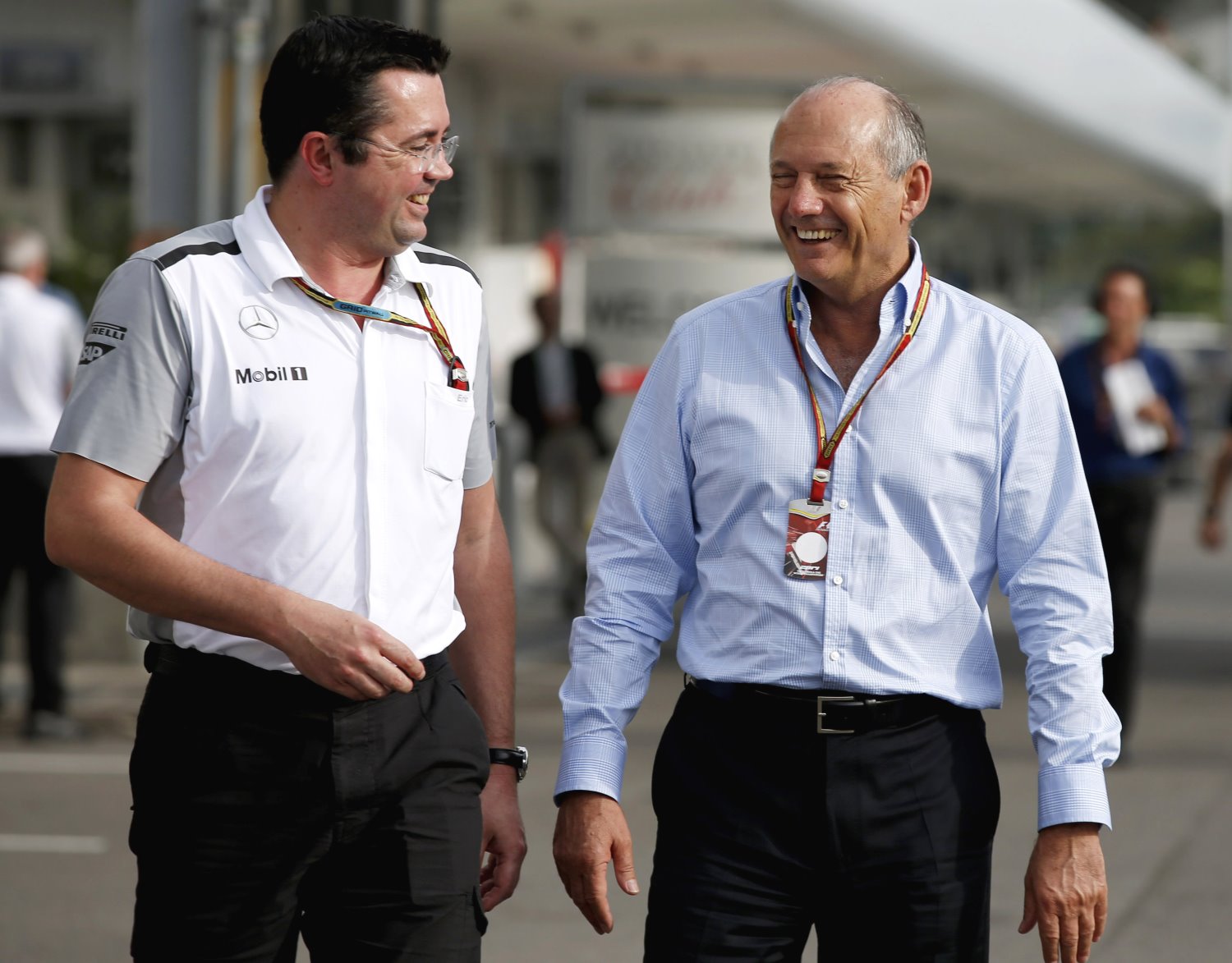 McLaren denies tension as Alonso returns
(GMM) Fernando Alonso has stepped up his preparations to return to action in Malaysia next weekend.

McLaren-Honda confirmed reports the Spaniard is at Woking, and on Wednesday he will be at the wheel of the team's sophisticated driver simulator.

"We have a program to help Fernando back to racing," a spokesman said.

There have been rumors the 33-year-old is nervous about returning to the cockpit of the MP4-30 while his Barcelona testing crash remains unexplained.

Team boss Eric Boullier told Spain's El Pais he has been in contact with Alonso "every day".

"He is perfect," said the Frenchman when asked about Alonso's medical condition. Boullier smiled: "In fact, he is starting to get worried about going crazy if he is not back soon."

He said Alonso will have the FIA's medical tests later this week and is expecting the "green light".

Boullier also denied the mysterious testing crash had already driven a wedge between Alonso and McLaren, with the pairing having fallen out so badly in 2007.

"It was a dramatic and very unfortunate event, but I can assure you that there is no problem between us.

"I was with him in the hospital every day," he said, "talking to doctors, and was completely transparent with the people around Fernando.

"I myself coordinated the investigation launched in Woking and everything was done in full transparency with the FIA. We, just as them, want to know what happened."

Wins 'still possible' for McLaren-Honda – Boullier
(GMM) Eric Boullier thinks it is "possible" McLaren-Honda might be in a position to win grands prix later in 2015.

His comments follow reports elsewhere the team boss warned it might be "years" before the new British-Japanese collaboration is fully up to speed.

Indeed, in an interview with Spain's El Pais, Boullier admitted Honda is in fact already years behind its rivals Mercedes, Ferrari and Renault.

"When Ferrari, Renault and Mercedes decided to introduce this engine," he said, "they began to develop their proposals three years before testing them.

"Honda decided to come back in May 2013, so that's only a year and half. Meanwhile, McLaren has undergone a revolution where we had to build everything together and while that is positive, we need some time.

"It has been too ambitious to try to be ready so quickly," Boullier added.

Indeed, Australia showed the reality of Honda's situation in all its starkness, as the silver and black cars lined up dead last on the grid.

Rumors suggest the gap to Mercedes is as much as 200 horse power or more, and that simply to get through the weekend, Honda had to 'turn off' its energy-recovery systems altogether.

But when asked if the MP4-30 can be a winner in 2015, Boullier answered: "Yes, it is still possible, although not in three, four or five races.

"But I do believe that we will be competitive."

Having struggled in 2014, the fabled Italian team proved in Melbourne that it has leapfrogged Red Bull and Williams to be 'best of the rest' so far this year.

"Compared to where we were last year," Kimi Raikkonen told reporters, "for sure as a team we did the best job over the winter."

Many experts are nonetheless predicting a lonely season of easy one-twos for Mercedes, but team boss Toto Wolff is refusing to write off Ferrari.

"We won in Melbourne by about 30 seconds to Ferrari," he is quoted by Universo.

"If you consider where they were last year, that is quite impressive.

"We can see from GPS that their engine is very powerful and the car is very good. I think it's only a matter of time before they reach us, because Ferrari as a team has everything you need to do that," added Wolff.

Given Mercedes' utter dominance in Australia, some might smirk at Wolff's comments, but F1 veteran David Coulthard agrees it is far too soon to predict the outcome of an entire world championship.

"You can see from what Ferrari has done that it is possible to move forwards," the former Red Bull driver told Austria's Servus TV.

"Red Bull is having problems and the same is obviously true of McLaren and Honda, but they are working on solutions.

"You can't look at just one race, you also have to see the big picture," added Coulthard.

The battle between the Dutch driver and his backers and the struggling Swiss team raged in the Melbourne courts, but suddenly ended before qualifying for the 2015 season opener.

Some sensed the intervening hand of Bernie Ecclestone, others the deep pockets of Peter Sauber or Felipe Nasr and Marcus Ericsson's concerned backers.

Another rumor is that van der Garde's main backer and father-in-law Marcel Boekhoorn, a billionaire, will end up owning a stake in the 22-year-old F1 team.

A spokesman for Sauber, meanwhile, told the Swiss broadcaster Schweizer Radio und Fernsehen on Tuesday: "We are pleased that the matter is settled.

"As to the details, we cannot comment for reasons of confidentiality, and we will not engage in speculation," he added.

Last year, the FIA introduced a ban on so-called 'driver coaching' instructions, but intended to ramp it up even further for 2015 to also make the relaying of technical instructions from the pitwall to the drivers illegal.

Anticipating the ban, many teams upgraded their steering wheels for 2015 to include the new McLaren-supplied large display, so that drivers have access to more real-time technical data.

However, the intended 'second phase' of the radio clampdown has in fact been postponed, the Italian publication Autosprint reports.

The report said the powerful 'Strategy Group' made the call on the basis that not giving the drivers adequate information over the radio about how to manage their complex machinery could result in damage to the power units.

"The rules will be as they were in 2014," confirmed F1 race director Charlie Whiting.

"Driver coaching will continue to be prohibited," he added.

The Dutchman's management confirmed reports that a settlement with the Swiss team has resulted in the end of his 2015 race contract "by mutual consent".

Reports had suggested van der Garde, 29, and his backers had been refunded EUR 15 million including legal costs, but the driver said it only left him "sad and very disappointed".

He would not comment on the actual figure, but confirmed that Sauber paid "significant compensation".

"This dream has been taken away from me and I know that my future in formula one is probably over," he said in a statement posted on Facebook.

Van der Garde was critical of Sauber team boss Monisha Kaltenborn, revealing she was "adamant not to let me drive" in Melbourne.

He said he ultimately agreed to settle only because pushing forward might have "brought down" Sauber, "wrecked" the season opener and "ruined the careers" of Felipe Nasr and Marcus Ericsson.

"I decided I did not want to live with that idea, even though it was only the team's management that was responsible for the bizarre situation I found myself in," said van der Garde, who revealed that his sponsors paid for his 2015 seat in full early last year.

"This was simply in good faith and to help the team deal with its cash problems at the time. Effectively, it was my sponsor's advance payments that helped the team survive in 2014," he explained.

He said he will now try to resurrect his career at Le Mans or in the DTM series.

Van der Garde thanked F1 drivers and personalities for privately and publicly backing his stance against Sauber, and hoped the case would help set "new standards" to "protect the rights of drivers".

"I would like to think that the values and business ethics that apply in any other business should be equally applicable in formula one," he said.

With this partnership Singapore Airlines will provide flights to the overseas races mainly in Asian and Australian territories.

Monisha Kaltenborn, Team Principal:
We are excited to embark on a long-term and sustainable partnership with Singapore Airlines, the world’s most renowned Airline and a highly respected company with a true global presence. Its unparalleled ambition to deliver the best in industry service perfectly matches with our striving for leading edge racing in F1.

Ranjan Jha, General Manager Switzerland Singapore Airlines:
We are very pleased to be the Official Airline Partner of the Sauber F1 Team. We share the same fascination and passion for engineering and consistent ambition for innovation, highest quality and precision. Sauber stands for a strong brand with a long-time, impressive tradition. We are excited about the new season and looking forward to embarking on this journey together.