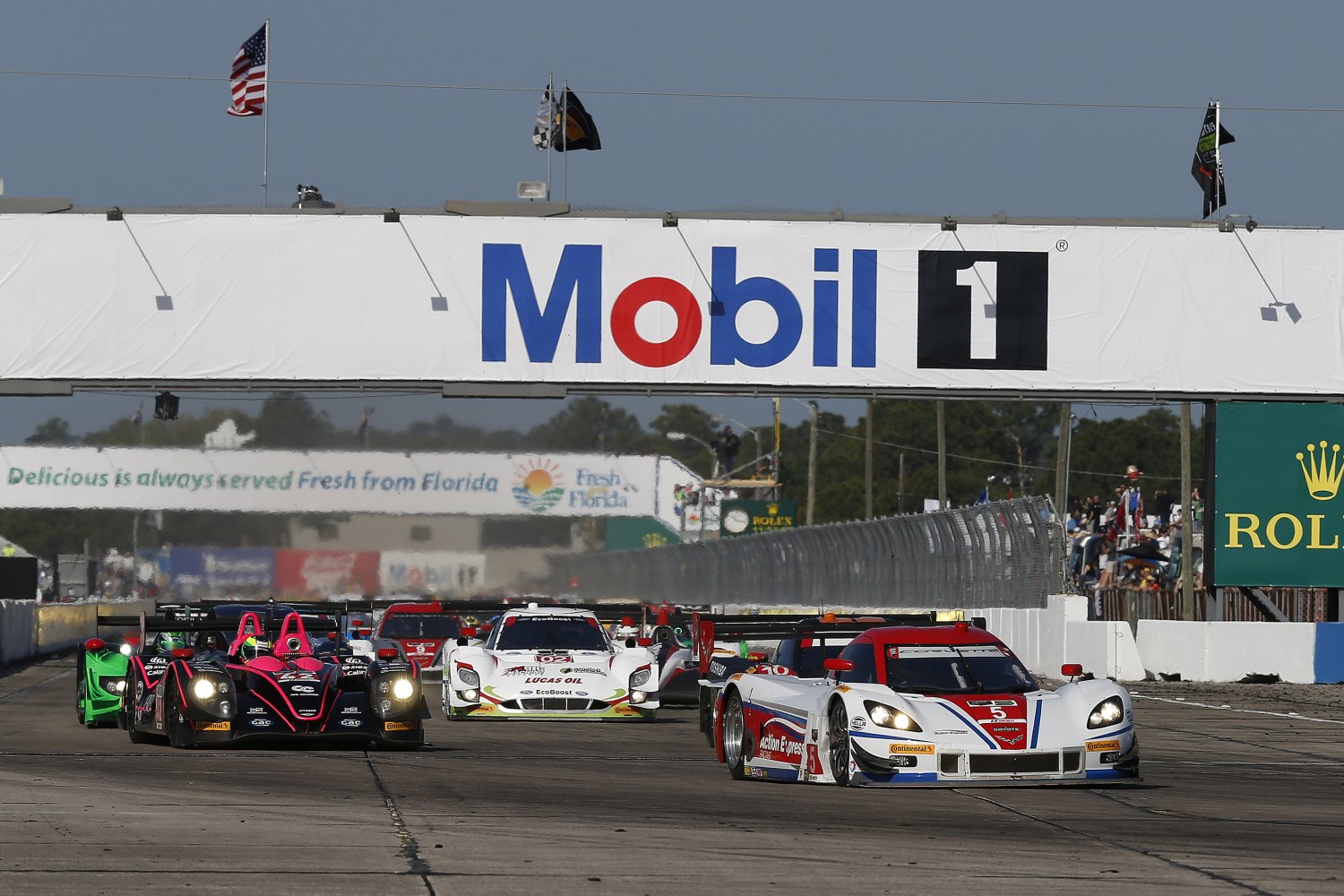 An annual rite of spring for motorsports fans since 1952, Sebring International Raceway again becomes the center of the sports car racing universe next week.

A massive crowd of sun-splashed fans is expected for the TUDOR United SportsCar Championship feature, which takes the green flag on Saturday, March 21, at 10:40 a.m. ET.

Nowadays, the race is one of the crown jewels of the TUDOR Championship schedule and serves as Round 2 of the Tequila Patron North American Endurance Cup, following the season-opening Rolex 24 At Daytona.

A 47-car entry featuring the four TUDOR Championship classes will compete ‘round the clock on the 3.74-mile, 17-turn circuit which preserves the flavor of the original configuration. Last year’s race was one of the most competitive in the event’s history, with nine Prototypes finishing on the lead lap as 11 cars exchanged the lead 30 times.

The 14-car Prototype class includes a mix of the Daytona Prototypes, P2 cars and the exotic DeltaWing, including 2014 winner Scott Pruett, who returns with Joey Hand and Rolex 24 winner Scott Dixon in the No. 01 Chip Ganassi Racing with Felix Sabates Ford EcoBoost/Riley.

The Tequila PatrÂ¢n ESM team will field a pair of HPD ARX-03b/Hondas for a driver lineup that includes 2014 runner-up Scott Sharp, Ryan Dalziel and David Heinemeier Hanson. Rolex 24 pole winner Ozz Negri leads a lineup for Michael Shank Racing with Curb/Agajanian’s No. 60 Ligier JS P2/Honda, with other entries including a pair of diesel-powered Mazda Prototypes and brothers Ricky and Jordan Taylor in their father’s No. 10 Konica Minolta Corvette DP.

“Sebring has always been one of my favorite tracks," said Wayne Taylor, owner of Wayne Taylor Racing. “It reminds me of the ‘80s and ‘90s, when I was growing up and watching the great races. Winning there in 1996 was one of my best memories. The crowd at Sebring really gets involved, and seeing their support in the ceremonies was very, very nice. Last year I was inducted into the Sebring Hall of Fame, and I really look forward to this year with my sons and Max (Angelelli) driving."

Recognized as the most competitive GT class on the planet, GT Le Mans (GTLM) has a nine-car entry for factory-backed Corvettes, Porsches, BMWs, Ferraris and an Aston Martin. Defending class winners Patrick Long and Joerg Bergmeister return in separate Porsches, while the Rolex 24-winning Corvette Racing team looks to add to its Sebring heritage of eight victories since 2002.

The GTD class is the largest class in the field featuring 17 cars from six different manufacturers. In 2014, an impressive six cars finished on the lead lap with the Porsche 911 GT America of Potter, Lally and Seefried beating the Ferrari 458 Italia of Bill Sweedler, Townsend Bell, Jeff Segal and Maurizio Mediani by a mere 1.864 seconds.

Stevenson Motorsports scored the first victory for the Chevrolet Camaro Z/28.R at Sebring in 2014, and co-drivers Robin Liddell and Andrew Davis are back in the No. 6 entry. Freedom Autosport claimed last year’s ST victory, with returning winner Andrew Carbonell now joined by twice-wounded U.S. Marine Staff Sgt. Liam Dwyer in the No. 26 Mazda MX-5.

While Sebring represents the second round of the 2015 season for both the TUDOR Championship and Continental Tire Challenge, a pair of IMSA-sanctioned series kicks off their seasons next week.

The Cooper Tires Prototype Lites Powered by Mazda will feature a 25-car entry. In recent years, this series has been a launchpad for rising TUDOR Championship stars like Tristan Nunez and Mikhail Goikhberg.

“I always love going to Sebring – we were just there testing and we’re looking forward to go back there to race," said John Church, co-owner of JDC-Miller MotorSports which fields teams in both the TUDOR Championship Prototype Challenge and Prototype Lites. “It’s always fun to be there, but the competition there gets harder—that makes winning more special. I’ve won a lot of races at Sebring over the years, and winning always makes it more exciting."

Both series feature a pair of races next week on Thursday and Friday.