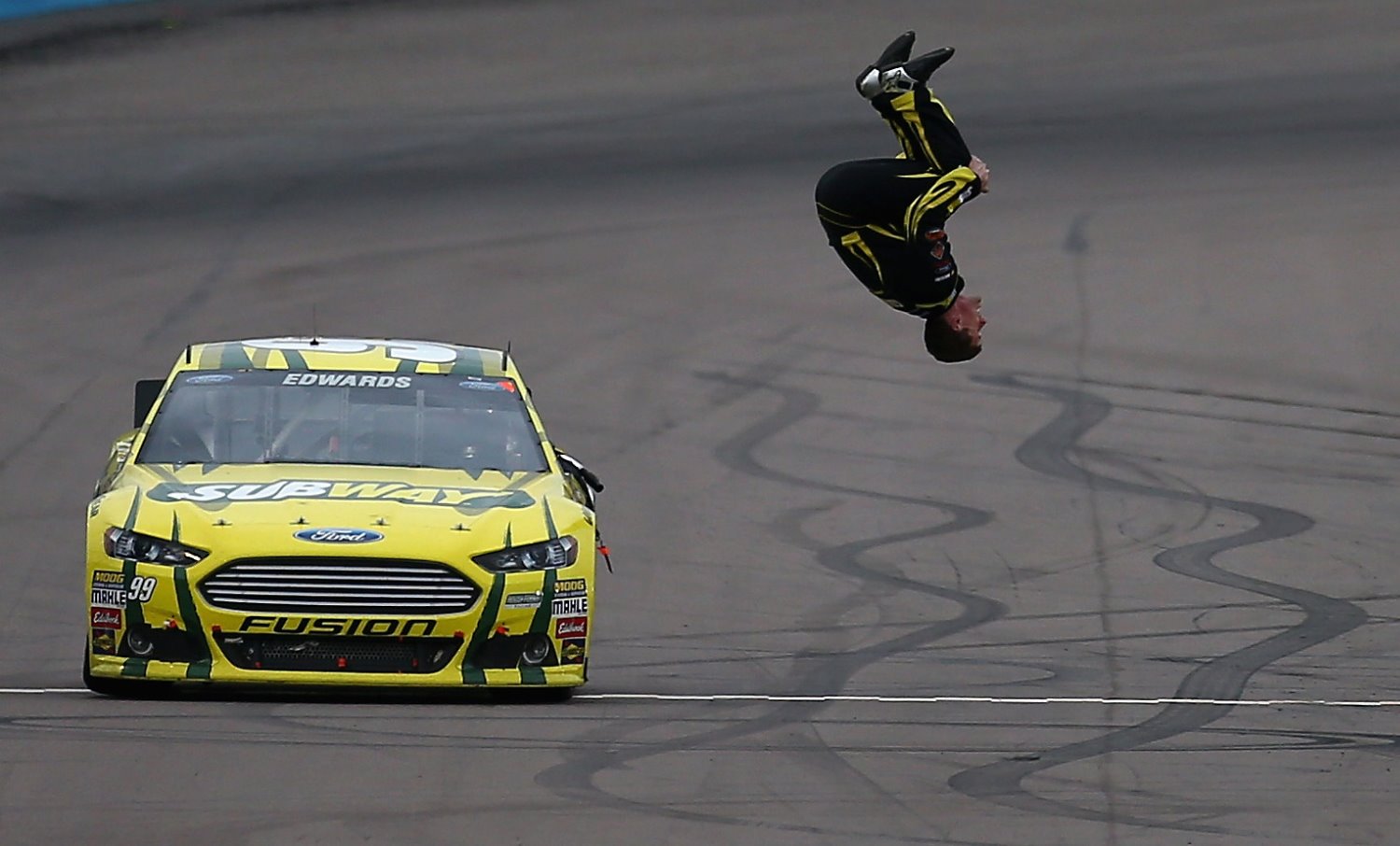 PHOENIX FLIPS: After 21 career starts at the one-mile desert oval, Carl Edwards will head to Phoenix International Raceway (PIR) this weekend driving for a new team – Joe Gibbs Racing – and a new manufacturer with Toyota. Edwards is one of only five active drivers to visit victory lane at Phoenix more than once in his career. The Missouri-native has accumulated two wins, seven top-five results and 12 top-10 finishes in his starts at the Arizona track. In addition, Phoenix is the site of the most poles in the NSCS for Edwards with a total of three.

TOYOTA 120 RETURNS: The NASCAR Mexico Series returns to Phoenix International Raceway on Friday for the Toyota 120, the season-opening race for the series. This year marks the third-consecutive season the series has raced north of the border in the United States. Toyota driver and defending race winner Daniel Suarez will be the grand marshal for the 120-lap race prior to competing in Saturday's NASCAR XFINITY Series race at PIR. This year's Toyota 120 will take place at 7 p.m. MDT and will be broadcast on NBC Universo.

REDESIGNED TO RACE: When the 2015 NASCAR season opened at Daytona International Speedway, the Toyota Camrys competing on track were the first of NASCAR's current generation vehicles to be upgraded. Because the Toyota Camry production model received an upgrade for 2015, the change necessitated a redesign for the Camry race car to maintain continuity between the production model and racing program. Engineers from TRD (Toyota Racing Development, U.S.A.) and Calty Design, an arm of Toyota's global design network, worked to update the Camry race car to reflect the production model, yet incorporate performance enhancements into the new Camry. The redesigned 2015 Camry competes in both the NSCS and NXS.

NASCAR Sprint Cup Series (NSCS): Camry drivers Denny Hamlin (eighth), Matt Kenseth (10th) and Clint Bowyer (14th) currently rank in the top-15 in the NASCAR Sprint Cup Series (NSCS) point standings … Toyota drivers have two NSCS victories at Phoenix International Raceway … Hamlin won at the track in March 2012 and former Camry driver Kasey Kahne was victorious at PIR in Nov. 2011 … With Kyle Busch sidelined due to injury, Denny Hamlin will tie Busch for the most NSCS starts in a Camry in the PIR race … Busch has made 251 NSCS starts for Toyota since 2008, while Hamlin enters Phoenix with 250 starts in a Camry … Wes Evans, the jack man for Michael Waltrip Racing's No. 55 Camry, played tight end and defensive end on Arizona State's football team (2004-08) …Evans saw action in 27 games for the Sun Devils, 14 on defense and 13 as a tight end.

What are your expectations heading to race at Phoenix this weekend?

"Since they repaved Phoenix a few years ago, it's been a challenge for the teams and drivers. It seems like Goodyear has adjusted the tire combination a little bit. I enjoyed the old configuration with Phoenix and haven't had a really solid run with the new configuration, so that's a track I'm really excited to get to with the SNICKERS Xtreme JGR team and kind of see how competitive I can be with their package. Phoenix is a great place to watch a race. They always pack the grandstands and have good weather this time of year, and it's always a stop I look forward to."

Was it rewarding to know that Matt Kenseth and Carl Edwards supported your move to the No. 18 Camry?

"Yeah, I think it certainly played a key role in Carl (Edwards) and Matt (Kenseth) putting in a good word for me, and Kyle (Busch) and Denny (Hamlin) – you know, obviously I was a teammate for a few years with Carl and Matt and really had a good relationship with them, and I think they've seen that transition from one team to another and so I don't think I would be in the 18 SNICKERS Xtreme Camry without their help. And then, certainly Kyle giving a recommendation and Denny, we've all got to work together. I'm so grateful for that."

How will the new rules package impact the racing in Phoenix?

"I don't know. I don't know that's going to be a lot different, to be honest with you, except for the power loss. The power loss is way bigger than the downforce difference that they made. You're just going to have to be really rolling in the middle of (Turns) 1 and 2 really good because I think with less power it's going to show up even more if you miss it."

Is Phoenix a track where you have more confidence in getting the first win of the season?

"Phoenix has always been one of my favorite race tracks. It was the first place that I ever raced on pavement. It's special to me – I like going out there to the desert. I like the way the track is laid out and the challenges that poses. We've got some wins there, so for me I look at Phoenix as an opportunity for us to go get a win."

What are your expectations returning to a track where you've won like Phoenix?

"2013 here at Phoenix really jump-started things for me with that first Truck Series win. Then to follow it up with another one last year gives me confidence coming back to this race track. A lot doesn't translate from the trucks to the cars, but having experience on a track makes a difference and gives me the confidence to go out and learn more. Phoenix has been really good to me. Hopefully we can lead laps and win another race – especially in the next series."