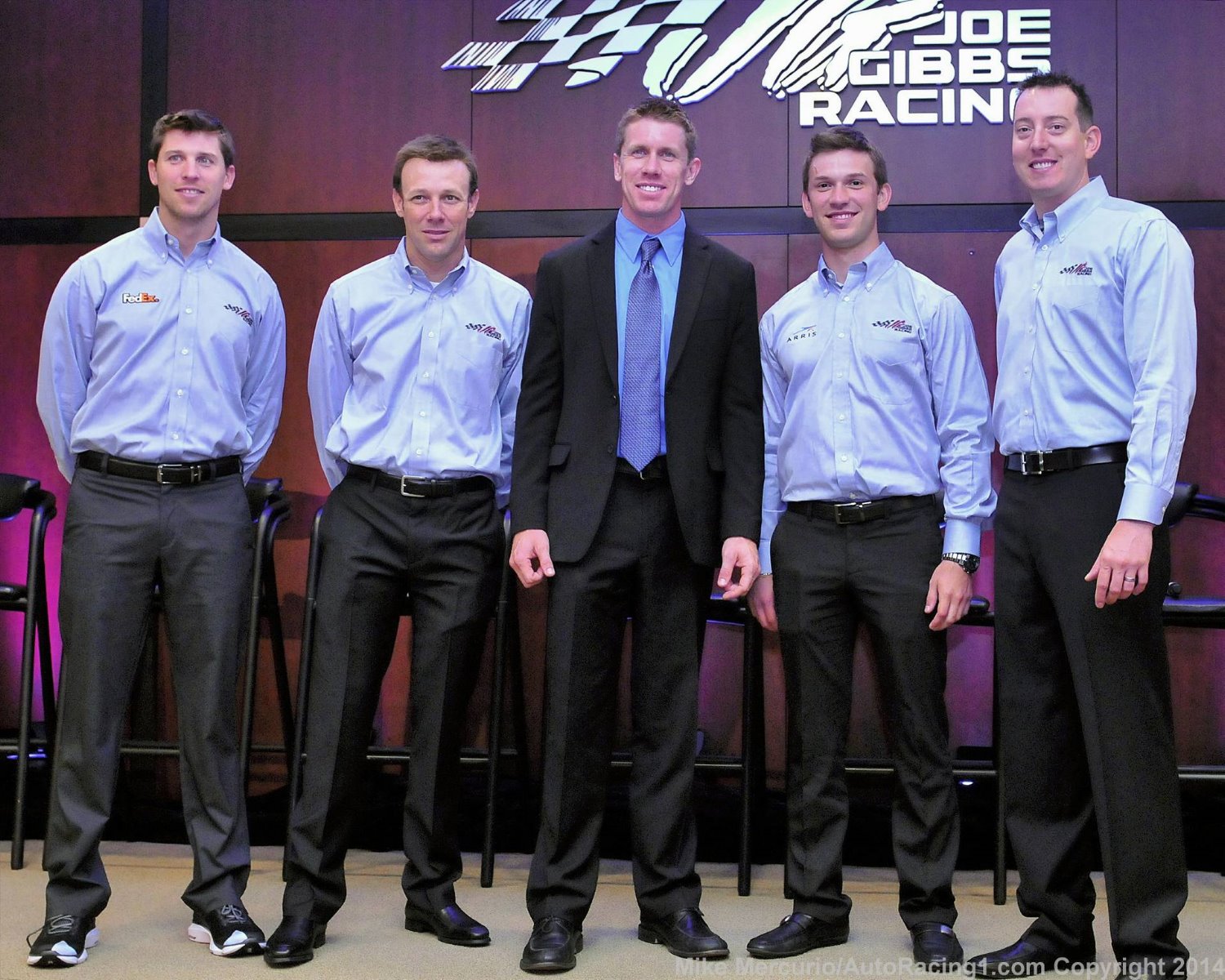 (Editor's note: Here is part 2 of the drivers from Joe Gibbs Racing meeting with the media earlier today. For part 1, see here.)

What will Carl Edwards bring to Joe Gibbs Racing?

"I think one thing it definitely does is brings a lot of resources to our race team. Any time you can bring in a fourth sponsor and driver, you're bringing in extra revenue and that allows us to hire more people, spend more money on R&D and things like that that are really important for a team's success. I think you've seen that in years past every time that Kyle (Busch) has come onto the team, and I've seen it with each Cup driver that's come in here, it brought a level of talent that's made everyone else raise the level of their game. There's tracks that Carl (Edwards) is good at that none of the rest of us three are that good at, so we'll be picking his brain on those types of race tracks and it's going to work hand-in-hand, vice versa. I think he's just going to be that extra element that puts our team in that tier you're talking about battling for a championship every year."

What does it say about Joe Gibbs Racing that the team was able to expand to a fourth Camry entry?

"Well one thing about Joe Gibbs Racing, and you hear it year after year, is that sponsorship is sold out. That's a really, really good thing in our sport and a lot of it is because Joe Gibbs does such a great job talking to these companies and giving them a return on their investment. And I think a lot of it comes from on-track success too — these companies want to be associated with teams that win and Joe Gibbs Racing gives them that platform. Obviously, the relationships that he's built over these last few years, these companies are staying a long time and that means a lot."

Is a championship your expectation for 2015?

"It's constantly our goal and I've finished everywhere in the points spectrum that you can in the top-five without being first. So yeah, in my mind it's a championship or nothing. But you've also got to think that if you come up short in the last race after a 10-win season, it's still been a pretty good year. You always upgrade your goals, but the pinnacle of actually being a Sprint Cup champion is always the highest bar you can possible set and that's where I set my standards."

Has it become easier for drivers to switch teams and have success?

"I think it really depends why you switched teams. If you got let go and went somewhere not as good or something like that, but if you're going and the driver makes the decision that they want to go somewhere else more times than not they obviously feel like it's going to be an upgrade of they wouldn't go. I think a lot of it just depends. Certainly with my choice, I felt extremely confident about it, we talked about it and I got to see what was going on over there (at Joe Gibbs Racing) and I felt really good about it. I think it just depends on the situation. I think for a younger driver maybe it's tough sometimes, but yet you look at Joey (Logano) in his second year and he's contending for a championship and runs way better than he ran in the car I'm driving. Sometimes I think you just mix it up a little bit and get a different mix of guys, different mix of ideas, a different organization and different things and sometimes it might just fit you better."

Are there similarities between your move to Joe Gibbs Racing and Carl Edwards now joining the team?

"Probably a little bit different of a situation because we're starting another team. It's a little bit different because there's different things with that, but yeah. He's a guy who spent his whole career at the same place and he's making a jump, which is never easy to do when you leave somewhere where you're comfortable and you've been a long time and understand how it works and won races there and things have went well. It's never easy to do that, so there's some similarities there."

How is your confidence entering 2015?

"I'm confident with everything we've got going on, but my confidence level isn't as high as it was in '13 when we were out there and were so fast. In 2013, we started the year off and had a couple of great off-season tests, went and I felt like dominated the Daytona 500 before blowing up and then we went to Phoenix — don't know where we qualified — but we were really fast at Phoenix, had a problem in the pits and still finished okay and went and won Vegas, the third race. We really could have won all three of the first races of the year, so our confidence was extremely high. Now we've gone over a season without winning, so obviously we're not as confident about winning as we were when we we're winning if that makes sense."

How will the adjustable track bar affect racing at intermediate tracks?

"I don't know. I have to put some thought into that. Everybody is going to have different opinions until we run. In my mind and this is my first guess, I actually think it will be more difficult to pass because the guy in front has got to be handling worse than the guy behind him to pass him. If you both can adjust your cars and make them better, I don't know how that will make passing better, but I'm probably not thinking about it right. I need to run it for a while and play with it to see where it goes."

What do you think of the new Camry?

"I'll just give you a little bit of the way NASCAR does this. They do a really good job taking each manufacturer and going through a process in the wind tunnel taking CAD (computer-aided design) drawings, templates and making sure that for each different manufacturer is within a certain box and the box is pretty tight. Thankfully, Toyota not only brought a really nice looking (car) — the 2015 Camry is just spectacular, it looks awesome — and I think it's the best looking car on the race track. Of course, I'm a little biased, but I still think it's the best looking car on the race track. But it wasn't like they just designed it up on paper and brought it to the teams and said, 'Here, bolt this on.' They had to go through some stringent wind tunnel testing with NASCAR, presentations and 'this is what it is' and prove it was within these certain limitations to not exceed what NASCAR wanted."