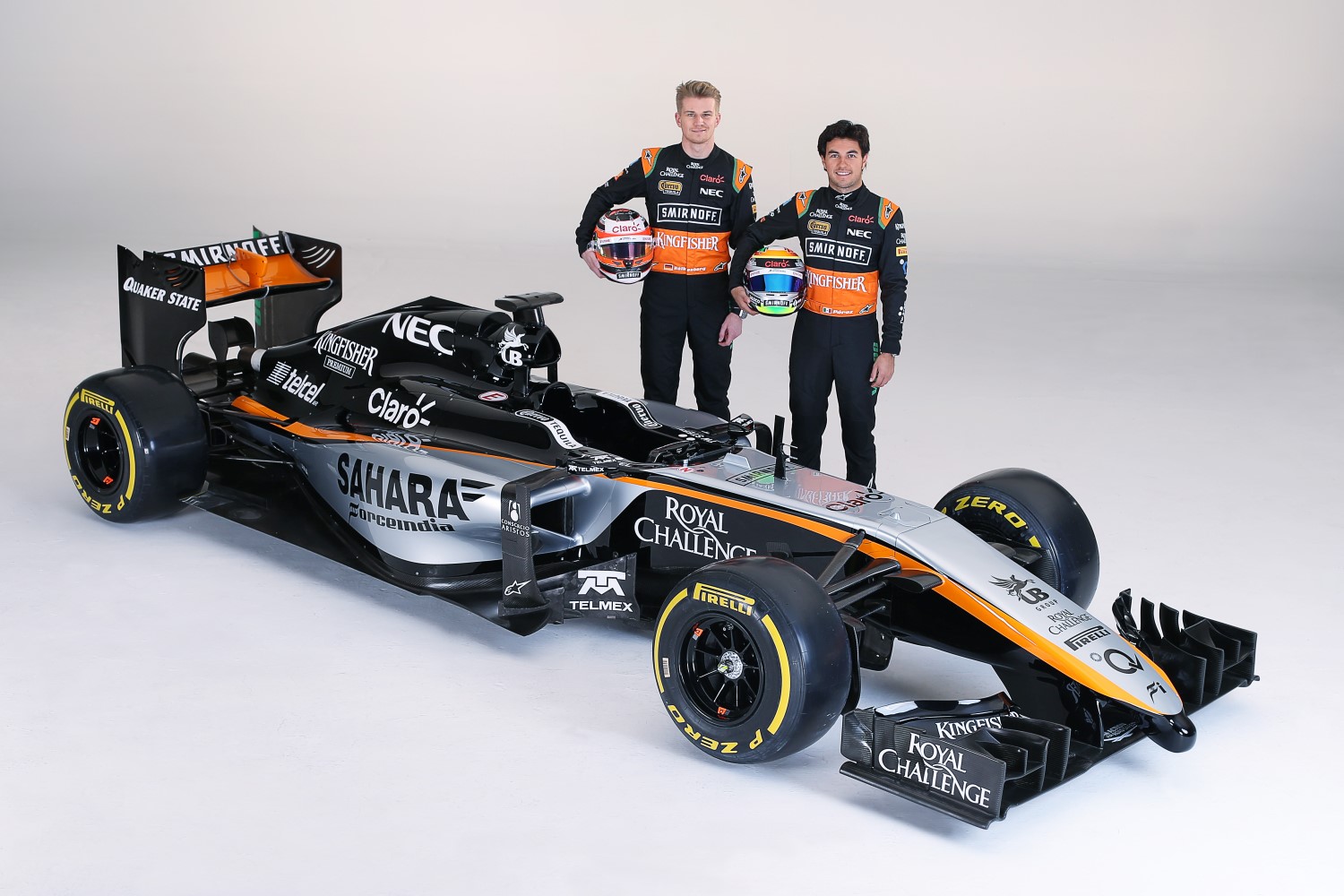 Force India shows new livery, 2015 nose
(GMM) Force India has become the next F1 team to unveil its new look for the 2015 season.

Some had expected that, at an event in Mexico City on Wednesday, the Silverstone based team would reveal its new car, the VJM08.

In fact, Force India will not begin to test its new machine until the second official test in Barcelona, meaning that in Mexico the car displayed was a show-car with a 2015-style nose.

As also demonstrated by Williams this week, the FIA's nose rules tweaks will have an effect on the shape of the 2015 grid, as the unseemly anteater-style solutions depart.

Lotus, however, has poked fun at the stubbly Williams solution, humorously comparing the FW37 to small animals with their tongues poking out in a cheeky Twitter post.

The new Force India nose also has a stubbly protrusion, but not even close to the scale of the much-derided front-end solution raced throughout 2014.

"I love the addition of silver," said Mallya, "which makes the car appear more sleek and aggressive and I'm sure it's something that will appeal to the fans as well."

Toto Wolff injures knee in training fall
(GMM) Toto Wolff is recovering from yet another injury, it has emerged in the Austrian media.

Last summer, the Mercedes team boss returned to the paddock wearing a sling, after badly breaking his arm in a road cycling crash.

And according to Salzburger Nachrichten, Wolff is now recovering from yet another injury, having suffered "a fall during endurance training".

The newspaper said the 43-year-old injured his knee.

Another Austrian publication, Kronen Zeitung, said Wolff even had to visit hospital, after falling from an exercise ball and breaking his knee-cap.

"His knee is like a football," a source is quoted as saying.

In the past days and weeks, Wolff's wife Susie, the Williams test driver, has posted videos on social media depicting her training with an exercise ball.

Lauda says Hamilton contract reports 'nonsense'
(GMM) Niki Lauda has rubbished reports Lewis Hamilton has been offered the most lucrative contract in F1 to keep him at Mercedes beyond 2015.

Italy's respected La Gazzetta dello Sport last week claimed the German team "has prepared a three-year renewal (for Hamilton) for a fixed EUR 20 million per season", including big bonuses for wins and titles.

But a newly-bespectacled Hamilton told Britain's Sky that he has not yet discussed a contract extension with the Brackley outfit.

"We're relaxed," said the 30-year-old. "The team have acknowledged they want to continue with me and vice versa, so there is no stress.

"I'm comfortable and confident and trust they're not speaking to anyone else, and they know that's the case with me," Hamilton added.

"We had always agreed with him that we will only talk when he (Hamilton) comes back from Colorado, around the first test in early February in Jerez," Lauda told the Austrian newspaper Kronen Zeitung.

"To date, neither Toto Wolff nor myself, or anyone else from Mercedes, has talked with Lewis about (contractual details of) money and length," he insisted.

"He also still has a contract until the end of the season," Lauda added.

Dominant Mercedes 'stressed' ahead of 2015 – Lauda
(GMM) Although Mercedes utterly dominated in 2014, team chairman Niki Lauda is still looking into the new season with trepidation.

For one thing, the F1 legend and triple world champion cannot understand the sport's looming schedule for pre-season testing.

"Everyone at Brackley is stressed," Lauda admitted to Austria's Salzburger Nachrichten.

"There are many things (to worry about)," he explained. "It bothers me that this year there is no test in the heat of Bahrain, unlike the previous year.

"In Spain, the temperatures are too low in February and then we go straight to the heat of Melbourne. I don't understand this schedule," Lauda added.

He also commented on the winter developments on the political front, with engine makers allowed to upgrade their 2015 engines beyond the original deadline.

"The newcomers Honda also want the same position as the others," said Lauda, "which I understand for reasons of fairness."

Lauda, meanwhile, was keen to look into the sport's future, amid reports Bernie Ecclestone is pushing for big technical changes to the cars and engines for 2017.

He said he agrees with the F1 supremo.

"Right now, the cars allow any F3 or GP2 driver to be fast right away, without having to take a lot of risk," he said. "You can drive these formula one cars almost like a street car.

"I want a car for the future that has 1,200 horse power, wide tires — formula one needs to be faster and more difficult, as it once was," Lauda added.

'Time will come' for Ocon after Lotus snub
(GMM) F1 hopeful Esteban Ocon might be forgiven for feeling disappointed about the latest signing at Lotus.

At the same time, his stock was rising at Lotus, where he is under contract to the team-linked Gravity management arm.

He made his Friday practice debut at the Abu Dhabi finale, being only narrowly outpaced by Pastor Maldonado and looking set to become the Enstone team's official reserve driver for 2015.

But at the eleventh hour, that coveted role in fact went to the new GP2 champion, Jolyon Palmer.

After Palmer's signing, Ocon said on Twitter: "Doesn't matter when, my time will come.

"Whatever I will do this year I can promise I will give 200pc dedication to win."

Ferrari must improve after difficult start – Elkann
(GMM) Fiat chairman John Elkann has joined Sergio Marchionne in admitting Ferrari will get off to a difficult start in 2015.

Amid the Maranello marque's revolutionary shake-up, new president Marchionne, also head of the Fiat-Chrysler parent, admitted Ferrari can only expect to put in better performances towards the end of the forthcoming championship.

Now, the New York-born Elkann, Fiat-Chrysler chairman and the grandson of the great patriarch Gianni Agnelli, has been quoted by La Repubblica: "Ferrari is working hard.

"We all know where we start from, but the important thing this year is to show the rate of improvement.

"The important thing is to improve," Elkann, 38, reiterated.

Meanwhile, after number 1 driver Fernando Alonso's switch from Ferrari to McLaren-Honda, the Spaniard also acknowledged he is in for a difficult 2015.

In Spanish, Alonso acknowledged to a follower of his social media pages: "It will be difficult to win races this year."

He admitted that his goal with McLaren for 2015 is to "learn, help, be happy and, long term, win."

F1 might not race in Germany this year – Ecclestone
(GMM) Germany could be removed from the F1 calendar altogether, Bernie Ecclestone has warned.

Earlier, amid the Nurburgring's financial and ownership troubles, the F1 supremo said it was likely Hockenheim would return in 2015 to host the German grand prix.

But officials for both German circuits responded by insisting they do not have contracts with Ecclestone's Formula One Management for the coming season.

So when asked by Britain's Sky if he is still confident Hockenheim will host the race in 2015, Ecclestone acknowledged: "Not really."

As for the fate of a German grand prix, the 84-year-old Briton quipped: "We've got one — it's called Austria."

He admitted the German promoters' troubles are essentially financial, but isn't sure why that is.

"Honestly I don't know. It's surprises me," said Ecclestone.

"Maybe it's a little bit that the German people were very used to and supported Michael (Schumacher) and miss Michael when he wasn't racing any longer."